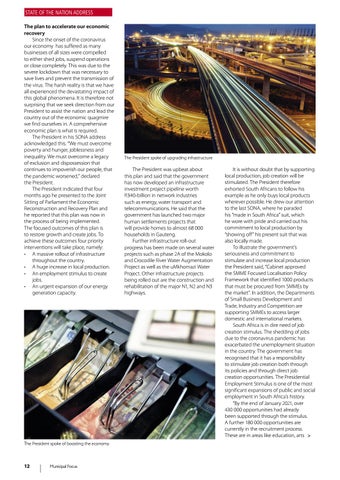 STATE OF THE NATION ADDRESS The plan to accelerate our economic recovery Since the onset of the coronavirus our economy has suffered as many businesses of all sizes were compelled to either shed jobs, suspend operations or close completely. This was due to the severe lockdown that was necessary to save lives and prevent the transmission of the virus. The harsh reality is that we have all experienced the devastating impact of this global phenomena. It is therefore not surprising that we seek direction from our President to assist the nation and lead the country out of the economic quagmire we find ourselves in. A comprehensive economic plan is what is required. The President in his SONA address acknowledged this. “We must overcome poverty and hunger, joblessness and inequality. We must overcome a legacy of exclusion and dispossession that continues to impoverish our people, that the pandemic worsened,” declared the President. The President indicated that four months ago he presented to the Joint Sitting of Parliament the Economic Reconstruction and Recovery Plan and he reported that this plan was now in the process of being implemented. The focused outcomes of this plan is to restore growth and create jobs. To achieve these outcomes four priority interventions will take place, namely: • A massive rollout of infrastructure throughout the country. • A huge increase in local production. • An employment stimulus to create jobs. • An urgent expansion of our energy generation capacity.

The President spoke of boosting the economy

The President spoke of upgrading infrastructure

The President was upbeat about this plan and said that the government has now developed an infrastructure investment project pipeline worth R340-billion in network industries such as energy, water transport and telecommunications. He said that the government has launched two major human settlements projects that will provide homes to almost 68 000 households in Gauteng. Further infrastructure roll-out progress has been made on several water projects such as phase 2A of the Mokolo and Crocodile River Water Augmentation Project as well as the uMkhomazi Water Project. Other infrastructure projects being rolled out are the construction and rehabilitation of the major N1, N2 and N3 highways.

It is without doubt that by supporting local production, job creation will be stimulated. The President therefore exhorted South Africans to follow his example as he only buys local products wherever possible. He drew our attention to the last SONA, where he paraded his “made in South Africa” suit, which he wore with pride and carried out his commitment to local production by “showing off” his present suit that was also locally made. To illustrate the government’s seriousness and commitment to stimulate and increase local production the President said, “Cabinet approved the SMME Focused Localisation Policy Framework that identified 1000 products that must be procured from SMMEs by the market”. In addition, the Departments of Small Business Development and Trade, Industry and Competition are supporting SMMEs to access larger domestic and international markets. South Africa is in dire need of job creation stimulus. The shedding of jobs due to the coronavirus pandemic has exacerbated the unemployment situation in the country. The government has recognised that it has a responsibility to stimulate job creation both through its policies and through direct job creation opportunities. The Presidential Employment Stimulus is one of the most significant expansions of public and social employment in South Africa’s history. “By the end of January 2021, over 430 000 opportunities had already been supported through the stimulus. A further 180 000 opportunities are currently in the recruitment process. These are in areas like education, arts