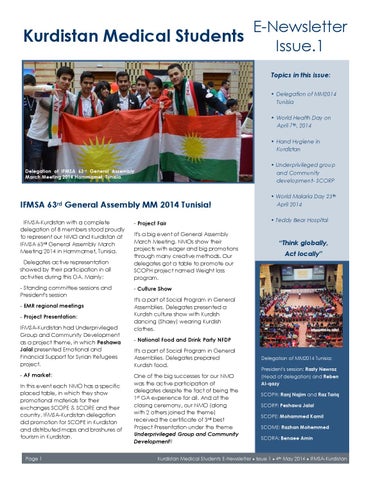 IFMSA-Kurdistan with a complete delegation of 8 members stood proudly to represent our NMO and Kurdistan at IFMSA 63rd General Assembly March Meeting 2014 in Hammamet, Tunisia. Delegates active representation showed by their participation in all activities during this GA. Mainly: - Standing committee sessions and President's session - EMR regional meetings - Project Presentation: IFMSA-Kurdistan had Underprivileged Group and Community Development as a project theme, in which Peshawa Jalal presented Emotional and Financial Support for Syrian Refugees project. - AF market: In this event each NMO has a specific placed table, in which they show promotional materials for their exchanges SCOPE & SCORE and their country. IFMSA-Kurdistan delegation did promotion for SCOPE in Kurdistan and distributed maps and broshures of tourism in Kurdistan.

- Project Fair It's a big event of General Assembly March Meeting. NMOs show their projects with eager and big promotions through many creative methods. Our delegates got a table to promote our SCOPH project named Weight loss program.

- Preparing the Anniversary Health Awareness Festival in Kurdistan. And this was the 3rd year in which festival location was Chaviland in Slemany. The festival was led by Farhad Fwad and some others. In which Dr. Miran general manager of health in Slemany, Dr. Qalandar a professor doctor in Surgery, Dr. Zana Ahmed, IFMSA-Kurdistan members and many other people participated. The festival involved many sessions with different subjects as; First aid Diabetes, Blood Pressure measurement, Tooth hygiene, AIDS, Anti-Smoking, Drug abuse, Breast self-examination, Thyroid -

examination, Healthy life style & BMI, Zoonotic diseases and Other health related issues. One of the biggest surprise and success of the event was the annual certificate of appreciation for the best doctor of the year, which was given to Dr. Qalandar!

Farhad Fwad - LPO - SCOPHians as well joined the IFMSA Campaign for spreading the WHD theme by giving WHO Boarding pass tickets and taking selfie pictures and Posting them on Facebook with the hashtags "#IFMSAWorldHealthDay" and "#Just1Bite"!!

Hand Hygiene in Kurdistan When we are young our parents have always taught us to wash our hands so by the time we become adults hand washing becomes “second nature”. On 10th April 2014 IFMSA SCOPH attended Ishik Gulan primary school in Kurdistan, North of Iraq to promote hand hygiene. The motivation for this project was brought about in the national meeting held by the IFMSA medical students during August 2013; we found out that according to the “World Health Organization” Kurdistan is not a part of the global hand washing day. So I took it upon myself to change this fact and lead this project into hopefully a start of something great. The day began with about 60 students and we showed them a PowerPoint explaining hand hygiene terminology such as germs, hygiene, and soap; then we explained why, when and how we wash. After we showed the children the “correct” method of washing our hands, we choose some volunteers and practiced until the children understood the main concept; we also taught them that sneezing into your elbow is important to prevent the spread of germs. Then the students were divided into smaller groups to do various activities; some did hand painting, other placed glitter or colored hand stencils and some sat on the mat and read books or watched videos related to hand hygiene. All these activities were then repeated for the next four groups of students. At the end of the day we gave each 300 students a certificate to encourage them to continue hand washing and teach others the importance of what they learnt that day. Before the day concluded the students raised their hands and took 5 promises to continue washing their hands. We also placed all the hand stencils and hand painting on 2 large posters and gave them to the school as a reminder of the fun day we had at the school.

Lacking opportunities or advantages which enjoyed by other members of one's community or they deny the enjoyment of the normal privileges or rights of a society because of low economic and social status.

This is still an ongoing process as some of the cases need ongoing medication and usual check-ups (they include cancer patients, thalassemia patients and a few others).

Community development is broad term of activities which SCORPions in IFMSAKurdistan focus mainly on following issues to be improved or developed: Financial, Medical, Emotional and Educational. 1-Financial support: SCORPians of IFMSA-Kurdistan held a campaign under the name of “Hana campaign” in the 16/10/2013 in Slemany to collect money, meat and other things to the Syrian refugees and then sending them to the Arba’t camp which was the home of the refugees; fortunately with help of citizens we collected much stuff.

4- Educational support: Furthermore it is in our plans for children…

In another appearance with Dilvia organization, SCORP Kurdistan planned to visit (Kawrgosk camp) of refugees on 22/04/2014, to provide training sessions for medical staff working in the camp as a part of medical support. Sessions involved training of: Blood pressure measurement, Blood sugar measurement, Temperature taking and injection. These sessions will be given on weekly basis.

2- Medical support: A group of 20 medical students visited Arba't camp and investigated all the serious cases that needed assistance from outside the camp (i.e. surgery, blood transfusion, and etc.). The Kurdistan Regional Government had already sent doctors there that were taking care of the more minor cases which made the job easier. After the investigation, plans were made for serious cases to visit specialized physicians in the city. One of the patients was given to an American NGO which does heart surgeries here and abroad. The others were being taken care of inside the hospitals.

3- Emotional support: on 18/10/2013 NORP of IFMSAKurdistan with cooperation of the Metrography Agency visited the same camp and took family photo of each refugee families then printing and giving them back the photos which actually made them feel Happy and cared.

In MM2014 Tunisia this project theme "Underprivileged group and Community development" was presented as part of IFMSA-Kurdistan project at project presentation by Peshawa Jalal – Kurdistan NORP. The project won 3rd position of best projects in IFMSA and IFMSA-Kurdistan delegation was called on the stage during closing ceremony to receive the certificate which was truly an amazing moment for our delegation!

World Malaria Day April 25th Malaria is one of the largest health problems till date but it is a preventable disease. Malaria is transmitted by mosquitoes and kills thousands if not millions of people each year. Pregnant women, young children, people who have HIV/AIDs and those travelling to endemic areas are at risk of getting Malaria. According to the World Malaria Day organizers, Malaria awareness “provides a common platform for countries to showcase their successes in malaria control and unify diverse initiatives in the changing global context”. In this day and age malaria is easily diagnosed and treated all it needs is proper education and the correct prevention tools. On the 25 of April till the 1st of May IFMSA SCOPHians took action to raise awareness about Malaria within Hawler Medical College in Kurdistan. We joined World Malaria Day campaign in the week of malaria, in which we took photos and wrote on our hands saying "I raise my hand to #defeatmalaria". According to the World Health Organization it is estimates that in subSaharan Africa, one child dies every minute from the disease. So as medical students it is our responsibility to raise awareness about the risks of Malaria and show the world we too are willing to fight for a good cause.

This year SCOPHians prepared this project in following kindergartens:

The “Teddy Bear Hospital” (TBH) is a Public Health project for 3-6 year old children. The aim is to take children’s fear of physicians and hospitals. Besides it is also a good opportunity for medical students to work with children. Everybody will once have to cope with the problem to examine children or to take a child to the doctor’s office. The little patients are suddenly in the unusual environment of a hospital. This is often inconvenient for them or is sometimes even associated with some unpleasant examinations and treatments. Indeed who of us likes to go to a doctor? Children are more frightened than adults when they have to visit a physician. Crying, tears and helpless parents often prevent an efficient work. The project TBH wants to help in this situation and tries to familiarize children in a friendly and pleasant atmosphere with the situation in a hospital or pediatrician’s office. Page 4 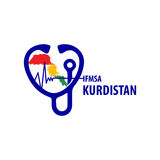 IFMSA-Kurdistan newsletter contains news of recent activities and articles of Medical Students in Kurdistan region, north of Iraq. Including...

IFMSA-Kurdistan newsletter contains news of recent activities and articles of Medical Students in Kurdistan region, north of Iraq. Including...