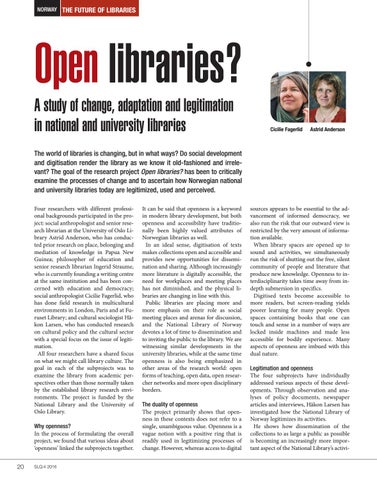 NORWAY THE FUTURE OF LIBRARIES

Open libraries? A study of change, adaptation and legitimation in national and university libraries

The world of libraries is changing, but in what ways? Do social development and digitisation render the library as we know it old-fashioned and irrelevant? The goal of the research project Open libraries? has been to critically examine the processes of change and to ascertain how Norwegian national and university libraries today are legitimized, used and perceived. Four researchers with different professional backgrounds participated in the project: social anthropologist and senior research librarian at the University of Oslo Library Astrid Anderson, who has conducted prior research on place, belonging and mediation of knowledge in Papua New Guinea; philosopher of education and senior research librarian Ingerid Straume, who is currently founding a writing centre at the same institution and has been concerned with education and democracy; social anthropologist Cicilie Fagerlid, who has done field research in multicultural environments in London, Paris and at Furuset Library; and cultural sociologist Håkon Larsen, who has conducted research on cultural policy and the cultural sector with a special focus on the issue of legitimation. All four researchers have a shared focus on what we might call library culture. The goal in each of the subprojects was to examine the library from academic perspectives other than those normally taken by the established library research environments. The project is funded by the National Library and the University of Oslo Library.

Why openness? In the process of formulating the overall project, we found that various ideas about ‘openness’ linked the subprojects together. 20

It can be said that openness is a keyword in modern library development, but both openness and accessibility have traditionally been highly valued attributes of Norwegian libraries as well. In an ideal sense, digitisation of texts makes collections open and accessible and provides new opportunities for dissemination and sharing. Although increasingly more literature is digitally accessible, the need for workplaces and meeting places has not diminished, and the physical libraries are changing in line with this. Public libraries are placing more and more emphasis on their role as social meeting places and arenas for discussion, and the National Library of Norway devotes a lot of time to dissemination and to inviting the public to the library. We are witnessing similar developments in the university libraries, while at the same time openness is also being emphasized in other areas of the research world: open forms of teaching, open data, open researcher networks and more open disciplinary borders.

The duality of openness The project primarily shows that openness in these contexts does not refer to a single, unambiguous value. Openness is a vague notion with a positive ring that is readily used in legitimizing processes of change. However, whereas access to digital

sources appears to be essential to the advancement of informed democracy, we also run the risk that our outward view is restricted by the very amount of information available. When library spaces are opened up to sound and activities, we simultaneously run the risk of shutting out the free, silent community of people and literature that produce new knowledge. Openness to interdisciplinarity takes time away from indepth submersion in specifics. Digitised texts become accessible to more readers, but screen-reading yields poorer learning for many people. Open spaces containing books that one can touch and sense in a number of ways are locked inside machines and made less accessible for bodily experience. Many aspects of openness are imbued with this dual nature.

Legitimation and openness The four subprojects have individually addressed various aspects of these developments. Through observation and analyses of policy documents, newspaper articles and interviews, Håkon Larsen has investigated how the National Library of Norway legitimizes its activities. He shows how dissemination of the collections to as large a public as possible is becoming an increasingly more important aspect of the National Library’s activi- 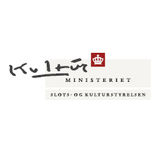