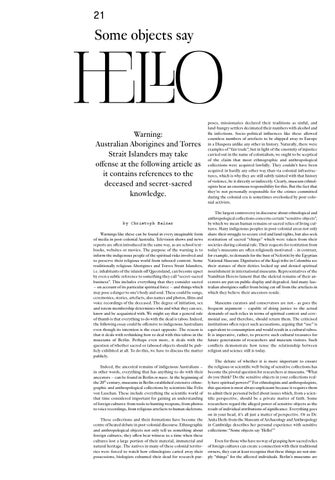 HELLo Warning: Australian Aborigines and Torres Strait Islanders may take offense at the following article as it contains references to the deceased and secret-sacred knowledge.

by Christoph Balzar Warnings like these can be found in every imaginable form of media in post-colonial Australia. Television shows and news reports are often introduced in the same way, as are school textbooks, websites or movies. The purpose of the warning is to inform the indigenous people of the spiritual risks involved and to preserve their religious world from tabooed content. Some traditionally religious Aborigines and Torres Strait Islanders, i.e. inhabitants of the islands off Queensland, can become upset by even a subtle reference to something they call “secret-sacred business”. This includes everything that they consider sacred – on account of its particular spiritual force – and things which may pose a danger to one’s body and soul. These could be songs, ceremonies, stories, artefacts, also names and photos, films and voice recordings of the deceased. The degree of initiation, sex and totem membership determines who and what they can see, know and be acquainted with. We might say that a general rule of thumb is that everything to do with the dead is taboo. Indeed, the following essay could be offensive to indigenous Australians even though its intention is the exact opposite. The reason is that it deals with rethinking how to deal with this taboo in the museums of Berlin. Perhaps even more, it deals with the ­question of whether sacred or tabooed objects should be publicly exhibited at all. To do this, we have to discuss the matter ­publicly. Indeed, the ancestral remains of indigenous Australians – in other words, everything that has anything to do with their ancestors – can be found in Berlin en masse. At the beginning of the 20th century, museums in Berlin established extensive ethno­ graphic and anthropological collections by scientists like F ­ elix von Luschan. These include everything the scientific world of that time considered important for gaining an understanding of foreign cultures: from tools to hunting weapons, from photos to voice recordings, from religious artefacts to human skeletons. These collections and their formations have become the centre of heated debate in post-colonial discourse. Ethnographic and anthropological objects not only tell us something about foreign cultures, they often bear witness to a time when these cultures lost a large portion of their material, immaterial and natural heritage. The natives in many of these colonial territories were forced to watch how ethnologists carted away their possessions, biologists exhumed their dead for research pur-

poses, missionaries declared their traditions as sinful, and land-hungry settlers decimated their numbers with alcohol and flu infections. Socio-political influences like these allowed countless numbers of artefacts to be shipped away to Europe in a Diaspora unlike any other in history. Naturally, there were examples of “fair trade”, but in light of the enormity of injustice carried out in the name of colonialism, we ought to be sceptical of the claim that most ethnographic and anthropological ­collections were acquired lawfully. They couldn’t have been ­acquired in hardly any other way than via colonial infrastructures, which is why they are still subtly tainted with that history of ­violence, be it directly or indirectly. Clearly, museum ethnologists bear an enormous responsibility for this. But the fact that they’re not personally responsible for the crimes committed during the colonial era is sometimes overlooked by post-colonial activists. The largest controversy in discourse about ethnological and anthropological collections concerns certain “sensitive objects”, by which we mean human remains or sacred relics of living cultures. Many indigenous peoples in post-colonial areas not only share their struggle to secure civil and land rights, but also seek restitution of sacred “things” which were taken from their ­societies during colonial rule. Their requests for restitution from today’s museums are often religiously motivated – in contrast, for example, to demands for the bust of Nefertiti by the E ­ gyptian National Museum. Dignitaries of the Kogi tribe in Colombia see their statues of their deities locked up and denied spiritual ­nourishment in international museums. Representatives of the ­Namibian Herero lament that the skeletal remains of their ancestors are put on public display and degraded. And many Australian aborigines suffer from being cut off from the artefacts in which they believe their ancestors reside. Museums curators and conservators are not– as goes the frequent argument – capable of doing justice to the actual ­demands of such relics in terms of spiritual context and ceremonial use, and therefore, should return them. The criticised institutions often reject such accusations, arguing that “use” is equivalent to consumption and would result in a cultural taboo. It is imperative, rather, to preserve such cultural treasures for future generations of researchers and museum visitors. Such conflicts demonstrate how tense the relationship between ­religion and science still is today. The debate of whether it is more important to ensure the religious or scientific well-being of sensitive collections has ­become the pivotal question for researchers at museums. “What do you think? Do the sensitive objects in your collections really have spiritual powers?” For ethnologists and anthropologists, this question is most always unpleasant because it requires them to admit their personal belief about issues which, from a scientific perspective, should be a private matter of faith. Some ­researchers regard the alleged power of sensitive objects as the result of individual attributions of significance. Everything goes on in your head, it’s all just a matter of perspective. Or as Dr. Anita Herle from the Museum of Archaeology and Anthropology in Cambridge describes her personal experience with ­sensitive collections: “Some objects say ‘Hello!’” Even for those who have no way of grasping how sacred relics of foreign cultures can create a connection with their traditional owners, they can at least recognise that these things are not simply “things” for the affected individuals. Berlin’s museums are

This issue highlights the topic "Religion" in connection with our funded projects. With articles by economist and philosopher Birger Priddat, cultural studies scholar Marcia Pally and British author Tim Parks. 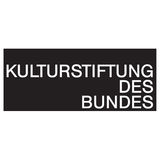