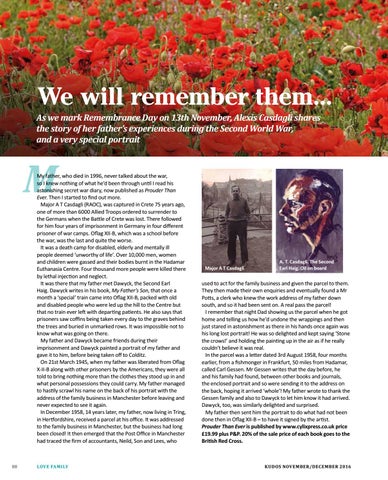 We will remember them... As we mark Remembrance Day on 13th November, Alexis Casdagli shares the story of her father’s experiences during the Second World War, and a very special portrait

My father, who died in 1996, never talked about the war, so I knew nothing of what he’d been through until I read his astonishing secret war diary, now published as Prouder Than Ever. Then I started to find out more. Major A T Casdagli (RAOC), was captured in Crete 75 years ago, one of more than 6000 Allied Troops ordered to surrender to the Germans when the Battle of Crete was lost. There followed for him four years of imprisonment in Germany in four different prisoner of war camps. Oflag XII-B, which was a school before the war, was the last and quite the worse. It was a death camp for disabled, elderly and mentally ill people deemed ‘unworthy of life’. Over 10,000 men, women and children were gassed and their bodies burnt in the Hadamar Euthanasia Centre. Four thousand more people were killed there by lethal injection and neglect. It was there that my father met Dawyck, the Second Earl Haig. Dawyck writes in his book, My Father’s Son, that once a month a ‘special’ train came into Oflag XII-B, packed with old and disabled people who were led up the hill to the Centre but that no train ever left with departing patients. He also says that prisoners saw coffins being taken every day to the graves behind the trees and buried in unmarked rows. It was impossible not to know what was going on there. My father and Dawyck became friends during their imprisonment and Dawyck painted a portrait of my father and gave it to him, before being taken off to Colditz. On 21st March 1945, when my father was liberated from Oflag X-II-B along with other prisoners by the Americans, they were all told to bring nothing more than the clothes they stood up in and what personal possessions they could carry. My father managed to hastily scrawl his name on the back of his portrait with the address of the family business in Manchester before leaving and never expected to see it again. In December 1958, 14 years later, my father, now living in Tring, in Hertfordshire, received a parcel at his office. It was addressed to the family business in Manchester, but the business had long been closed! It then emerged that the Post Office in Manchester had traced the firm of accountants, Neild, Son and Lees, who

A. T. Casdagli. The Second Earl Haig. Oil on board

used to act for the family business and given the parcel to them. They then made their own enquiries and eventually found a Mr Potts, a clerk who knew the work address of my father down south, and so it had been sent on. A real pass the parcel! I remember that night Dad showing us the parcel when he got home and telling us how he’d undone the wrappings and then just stared in astonishment as there in his hands once again was his long lost portrait! He was so delighted and kept saying ‘Stone the crows!’ and holding the painting up in the air as if he really couldn’t believe it was real. In the parcel was a letter dated 3rd August 1958, four months earlier, from a fishmonger in Frankfurt, 50 miles from Hadamar, called Carl Gessen. Mr Gessen writes that the day before, he and his family had found, between other books and journals, the enclosed portrait and so were sending it to the address on the back, hoping it arrived ‘whole’! My father wrote to thank the Gessen family and also to Dawyck to let him know it had arrived. Dawyck, too, was similarly delighted and surprised. My father then sent him the portrait to do what had not been done then in Oflag XII-B – to have it signed by the artist. Prouder Than Ever is published by www.cylixpress.co.uk price £19.99 plus P&P. 20% of the sale price of each book goes to the British Red Cross. 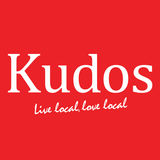