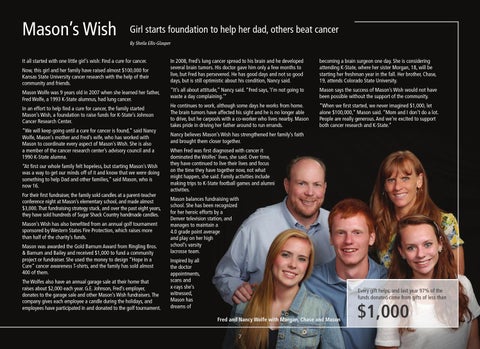 Girl starts foundation to help her dad, others beat cancer By Sheila Ellis-Glasper

It all started with one little girl’s wish: Find a cure for cancer. Now, this girl and her family have raised almost $100,000 for Kansas State University cancer research with the help of their community and friends.

In 2008, Fred’s lung cancer spread to his brain and he developed several brain tumors. His doctor gave him only a few months to live, but Fred has persevered. He has good days and not so good days, but is still optimistic about his condition, Nancy said.

becoming a brain surgeon one day. She is considering attending K-State, where her sister Morgan, 18, will be starting her freshman year in the fall. Her brother, Chase, 19, attends Colorado State University.

Mason Wolfe was 9 years old in 2007 when she learned her father, Fred Wolfe, a 1993 K-State alumnus, had lung cancer.

“It’s all about attitude,” Nancy said. “Fred says, ‘I’m not going to waste a day complaining.’”

Mason says the success of Mason’s Wish would not have been possible without the support of the community.

In an effort to help find a cure for cancer, the family started Mason’s Wish, a foundation to raise funds for K-State’s Johnson Cancer Research Center.

He continues to work, although some days he works from home. The brain tumors have affected his sight and he is no longer able to drive, but he carpools with a co-worker who lives nearby. Mason takes pride in driving her father around to run errands.

“We will keep going until a cure for cancer is found,” said Nancy Wolfe, Mason’s mother and Fred’s wife, who has worked with Mason to coordinate every aspect of Mason’s Wish. She is also a member of the cancer research center’s advisory council and a 1990 K-State alumna. “At first our whole family felt hopeless, but starting Mason’s Wish was a way to get our minds off of it and know that we were doing something to help Dad and other families,” said Mason, who is now 16. For their first fundraiser, the family sold candles at a parent-teacher conference night at Mason’s elementary school, and made almost $3,000. That fundraising strategy stuck, and over the past eight years, they have sold hundreds of Sugar Shack Country handmade candles. Mason’s Wish has also benefited from an annual golf tournament sponsored by Western States Fire Protection, which raises more than half of the charity’s funds. Mason was awarded the Gold Barnum Award from Ringling Bros. & Barnum and Bailey and received $1,000 to fund a community project or fundraiser. She used the money to design “Hope in a Cure” cancer awareness T-shirts, and the family has sold almost 400 of them. The Wolfes also have an annual garage sale at their home that raises about $2,000 each year. G.E. Johnson, Fred’s employer, donates to the garage sale and other Mason’s Wish fundraisers. The company gives each employee a candle during the holidays, and employees have participated in and donated to the golf tournament.

Nancy believes Mason’s Wish has strengthened her family’s faith and brought them closer together. When Fred was first diagnosed with cancer it dominated the Wolfes’ lives, she said. Over time, they have continued to live their lives and focus on the time they have together now, not what might happen, she said. Family activities include making trips to K-State football games and alumni activities. Mason balances fundraising with school. She has been recognized for her heroic efforts by a Denver television station, and manages to maintain a 4.0 grade point average and play on her high school’s varsity lacrosse team. Inspired by all the doctor appointments, scans and x-rays she’s witnessed, Mason has dreams of

Every gift helps, and last year 97% of the funds donated came from gifts of less than

Fred and Nancy Wolfe with Morgan, Chase and Mason 7 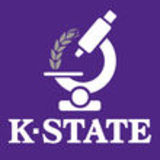