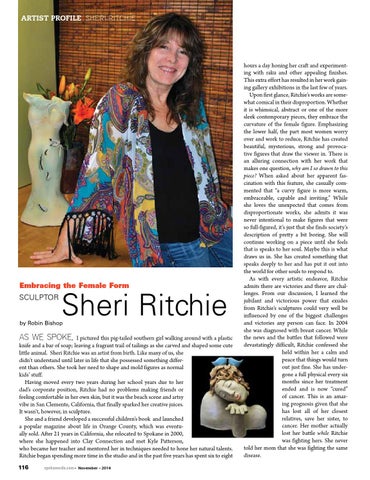 As we spoke, I pictured this pig-tailed southern girl walking around with a plastic knife and a bar of soap; leaving a fragrant trail of tailings as she carved and shaped some cute little animal. Sheri Ritchie was an artist from birth. Like many of us, she didn’t understand until later in life that she possessed something different than others. She took her need to shape and mold figures as normal kids’ stuff. Having moved every two years during her school years due to her dad’s corporate position, Ritchie had no problems making friends or feeling comfortable in her own skin, but it was the beach scene and artsy vibe in San Clemente, California, that finally sparked her creative juices. It wasn’t, however, in sculpture. She and a friend developed a successful children’s book and launched a popular magazine about life in Orange County, which was eventually sold. After 21 years in California, she relocated to Spokane in 2000, where she happened into Clay Connection and met Kyle Patterson, who became her teacher and mentored her in techniques needed to hone her natural talents. Ritchie began spending more time in the studio and in the past five years has spent six to eight 116

hours a day honing her craft and experimenting with raku and other appealing finishes. This extra effort has resulted in her work gaining gallery exhibitions in the last few of years. Upon first glance, Ritchie’s works are somewhat comical in their disproportion. Whether it is whimsical, abstract or one of the more sleek contemporary pieces, they embrace the curvature of the female figure. Emphasizing the lower half, the part most women worry over and work to reduce, Ritchie has created beautiful, mysterious, strong and provocative figures that draw the viewer in. There is an alluring connection with her work that makes one question, why am I so drawn to this piece? When asked about her apparent fascination with this feature, she casually commented that “a curvy figure is more warm, embraceable, capable and inviting.” While she loves the unexpected that comes from disproportionate works, she admits it was never intentional to make figures that were so full-figured, it’s just that she finds society’s description of pretty a bit boring. She will continue working on a piece until she feels that is speaks to her soul. Maybe this is what draws us in. She has created something that speaks deeply to her and has put it out into the world for other souls to respond to. As with every artistic endeavor, Ritchie admits there are victories and there are challenges. From our discussion, I learned the jubilant and victorious power that exudes from Ritchie’s sculptures could very well be influenced by one of the biggest challenges and victories any person can face. In 2004 she was diagnosed with breast cancer. While the news and the battles that followed were devastatingly difficult, Ritchie confessed she held within her a calm and peace that things would turn out just fine. She has undergone a full physical every six months since her treatment ended and is now “cured” of cancer. This is an amazing prognosis given that she has lost all of her closest relatives, save her sister, to cancer. Her mother actually lost her battle while Ritchie was fighting hers. She never told her mom that she was fighting the same disease.