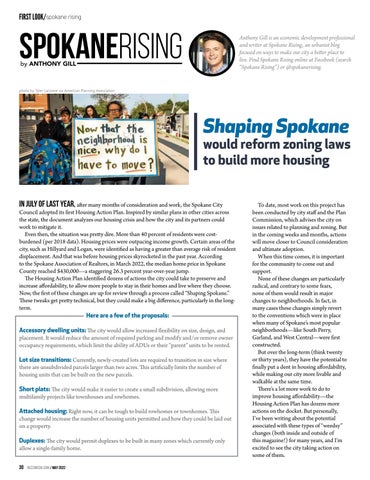 Anthony Gill is an economic development professional and writer at Spokane Rising, an urbanist blog focused on ways to make our city a better place to live. Find Spokane Rising online at Facebook (search “Spokane Rising”) or @spokanerising.

would reform zoning laws to build more housing In July of last year, after many months of consideration and work, the Spokane City

Council adopted its first Housing Action Plan. Inspired by similar plans in other cities across the state, the document analyzes our housing crisis and how the city and its partners could work to mitigate it. Even then, the situation was pretty dire. More than 40 percent of residents were costburdened (per 2018 data). Housing prices were outpacing income growth. Certain areas of the city, such as Hillyard and Logan, were identified as having a greater than average risk of resident displacement. And that was before housing prices skyrocketed in the past year. According to the Spokane Association of Realtors, in March 2022, the median home price in Spokane County reached $430,000––a staggering 26.3 percent year-over-year jump. The Housing Action Plan identified dozens of actions the city could take to preserve and increase affordability, to allow more people to stay in their homes and live where they choose. Now, the first of these changes are up for review through a process called “Shaping Spokane.” These tweaks get pretty technical, but they could make a big difference, particularly in the longterm. Here are a few of the proposals: Accessory dwelling units: The city would allow increased flexibility on size, design, and placement. It would reduce the amount of required parking and modify and/or remove owner occupancy requirements, which limit the ability of ADUs or their “parent” units to be rented. Lot size transitions: Currently, newly-created lots are required to transition in size where there are unsubdivided parcels larger than two acres. This artificially limits the number of housing units that can be built on the new parcels. Short plats: The city would make it easier to create a small subdivision, allowing more multifamily projects like townhouses and rowhomes. Attached housing: Right now, it can be tough to build rowhomes or townhomes. This change would increase the number of housing units permitted and how they could be laid out on a property. Duplexes: The city would permit duplexes to be built in many zones which currently only allow a single-family home.

To date, most work on this project has been conducted by city staff and the Plan Commission, which advises the city on issues related to planning and zoning. But in the coming weeks and months, actions will move closer to Council consideration and ultimate adoption. When this time comes, it is important for the community to come out and support. None of these changes are particularly radical, and contrary to some fears, none of them would result in major changes to neighborhoods. In fact, in many cases these changes simply revert to the conventions which were in place when many of Spokane’s most popular neighborhoods—like South Perry, Garland, and West Central—were first constructed. But over the long-term (think twenty or thirty years), they have the potential to finally put a dent in housing affordability, while making our city more livable and walkable at the same time. There’s a lot more work to do to improve housing affordability—the Housing Action Plan has dozens more actions on the docket. But personally, I’ve been writing about the potential associated with these types of “weedsy” changes (both inside and outside of this magazine!) for many years, and I’m excited to see the city taking action on some of them.