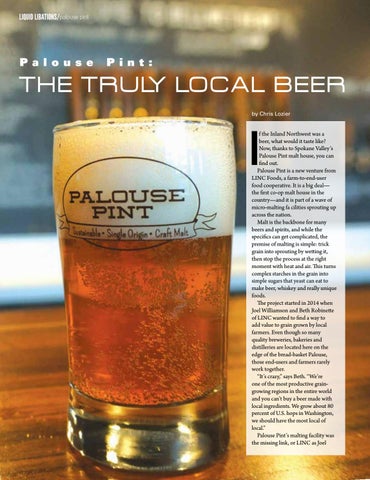 f the Inland Northwest was a beer, what would it taste like? Now, thanks to Spokane Valley’s Palouse Pint malt house, you can find out. Palouse Pint is a new venture from LINC Foods, a farm-to-end-user food cooperative. It is a big deal— the first co-op malt house in the country—and it is part of a wave of micro-malting fa cilities sprouting up across the nation. Malt is the backbone for many beers and spirits, and while the specifics can get complicated, the premise of malting is simple: trick grain into sprouting by wetting it, then stop the process at the right moment with heat and air. This turns complex starches in the grain into simple sugars that yeast can eat to make beer, whiskey and really unique foods. The project started in 2014 when Joel Williamson and Beth Robinette of LINC wanted to find a way to add value to grain grown by local farmers. Even though so many quality breweries, bakeries and distilleries are located here on the edge of the bread-basket Palouse, those end-users and farmers rarely work together. “It’s crazy,” says Beth. “We’re one of the most productive graingrowing regions in the entire world and you can’t buy a beer made with local ingredients. We grow about 80 percent of U.S. hops in Washington, we should have the most local of local.” Palouse Pint’s malting facility was the missing link, or LINC as Joel