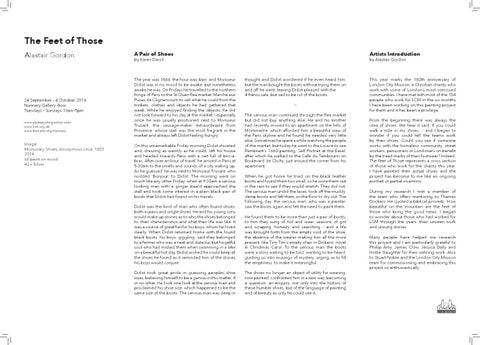 The Feet of Those Alastair Gordon

A Pair of Shoes

The year was 1886, the hour was 4am, and Monsieur Didot was in no mood to be awake, but nonetheless awake he was. On Fridays he travelled to the northern fringe of Paris to the St-Ouen flea market, Marché aux Puces de Clignancourt, to sell what he could from the trinkets, clothes and objects he had gathered that week. While he enjoyed finding the objects, he did not look forward to his day at the market – especially since he was usually positioned next to Monsieur Trucant, the sausage-maker extraordinaire from Provence, whose stall was the most fragrant in the market and always left Didot feeling hungry. On this unremarkable Friday morning Didot shivered and, dressing as warmly as he could, left his house and headed towards Paris with a cart full of bric-abrac. After over an hour of travel, he arrived in Paris at 5.30am to the smells and sounds of a city waking up. As he guessed, he was next to Monsieur Trucant, who nodded ‘Bonjour’ to Didot. The morning went on much like any other Friday, when at 9.30am a serious looking man with a ginger beard approached the stall and took some interest in a plain black pair of boots that Didot had found on his travels. Didot was the kind of man who often found shoes, both in pairs and single shoes. He and his young sons would make up stories as to who the shoes belonged to, their characteristics and what their life was like. It was a source of great fun for his boys, whom he loved dearly. When Didot returned home with the found black boots, his boys, giggling, said they belonged to a farmer who was a neat and duteous but forgetful soul who had mislaid them when swimming in a lake on a beautiful hot day. Didot wished he could keep all the shoes he found as it reminded him of the stories his boys would conjure. Didot took great pride in guessing peoples shoe sizes, believing himself to be a genius in this matter, if in no other. He took one look at the serious man and proclaimed his shoe size, which happened to be the same size of the boots. The serious man was deep in

thought and Didot wondered if he even heard him, but the man bought the boots without trying them on and off he went, leaving Didot pleased with the 4 francs sale, but sad to be rid of the boots. ~ The serious man continued through the flea market but did not buy anything else. He and his brother had recently moved to an apartment on the hills of Montmartre, which afforded him a beautiful view of the Paris skyline and he found he needed very little else. Sometimes he spent a while watching the people of the market, but today he went to the Louvre to see Rembrant’s 1660 painting, Self Portrait at the Easel, after which he walked to the Café du Tambourin on Boulevard de Clichy, just around the corner from his apartment. When he got home he tried on the black leather boots and found them too small, so he wore them out in the rain to see if they would stretch. They did not. The serious man undid the laces, took off the muddy, damp boots and left them on the floor to dry out. The following day, the serious man, who was a painter, saw the boots again and felt the need to paint them. He found them to be more than just a pair of boots; to him they sung of toil and wear, seasons of grit and scraping, honesty and searching - and a life was brought forth from the empty void of the shoe, the absence of the wearer making him all the more present, like Tiny Tim’s empty chair in Dickens’ novel A Christmas Carol. To the serious man the boots were a story waiting to be told, wanting to be heard, guiding us into musings of mystery, urging us to fill the emptiness, to make it meaningful. The shoes no longer an object of utility for wearing, now painted, confronted him in a new way, becoming a question, an enquiry, not only into the history of these humble shoes, but of the language of painting and of beauty as only he could see it.

This year marks the 180th anniversary of London City Mission, a Christian charity who work with some of London’s most ostricised communities. I have met with most of the 154 people who work for LCM in the six months I have been working on this painting project for them and it has been a privilege. From the beginning there was always the idea of shoes. We hear it said ‘if you could walk a mile in my shoes…’ and I began to wonder if you could tell the teams work by their shoes. Could you see if someone works with the homeless community, street workers, pensioners or Londoners on benefit by the tread marks of their footwear? Indeed, The Feet of Those represents a cross section of those who work for the charity this year. I have painted their actual shoes and the project has become to me like an ongoing portrait or partial inventory. During my research I met a member of the team who offers mentoring to Thames Dockers. He quoted a biblical proverb, ‘How beautiful on the mountain are the feet of those who bring the good news’. I began to wonder about those who had worked for LCM through the years, their unseen work and unsung stories. Many people have helped me research this project and I am particularly grateful to Phillip Amy, James Clow, Jessica Dally and Hollie Slaughter for their untiring work. Also to Stuart Noble and the London City Mission team for commissioning and embracing this project so enthusiastically.