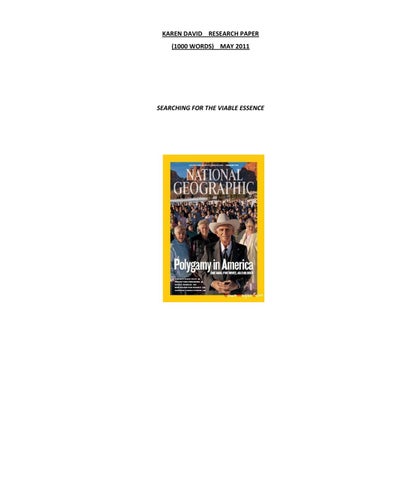 SEARCHING FOR THE VIABLE ESSENCE

SEARCHING FOR THE ‘VIABLE ESSENCE’

Whilst on holiday in Mexico last year, I found a National Geographic magazine discarded in a rented beach house in a little town called Sayulita. In an article entitled “The Cult of the Viable Essence” I read that 1

sometime in the late 1960’s, after the post-war surge of Abstract Expressionism the art critic Clement 2

Mountains . Here he became the high priest of the cult known as the ‘Viable Essence’ . Some say that he was testing theories of social conditions for making art, other accounts say he was researching a paper on ‘purification’. It is thought that when Greenberg returned to New York, a small group of disciples continued his work. The story goes that, years later, while surveying for land on which to build a new military base, the US government stumbled across a number of paintings in the groups’ meeting house. Among the works found 5

were copies of Morris Louis paintings with healing crystals placed on top of them, as well as copies of 6

Kenneth Noland’s ‘target’ paintings with Native American dreamcatchers attached to them . It is thought that the artists of the Colorado Springs ‘Cult of the Viable Essence’ sought to apply the properties of ‘new age’ tools such as healing crystals to revive the fading movement of Abstraction that was already giving way to the new Pop Art movement. The article goes on to say that although no paintings were documented, the controversy continues to this day with some historians contesting the existence of these paintings and discrediting the claims of the few remaining followers who still explore Greenberg’s teaching and his search for the ‘Viable Essence’. ________________________________________________________ 1. Until the 1940‟s Europe was the main world art centre. After WWII, the CIA saw Abstract Expressionism as a fitting metaphor for cultural freedom and liberal thinking. In a covert operation known as the „long leash‟ Abstract Expressionists artworks were promoted; major exhibitions being funded and used as a propaganda tool to help bring the centre of the art world to the United States. Greenberg, being a member of the CIA fronted Committee for Cultural Freedom, had a large role in the promotion of the artists of this movement. In his 1955 essay „American-Type Painting‟ he promotes Pollock, de Kooning, Hoffman, Newman and Still, speaking of the „flatness‟ of the picture plane. It is understood that Greenberg was speaking of the actual physical qualities (or limitations) of paint, its „twodimensionality‟; to be true to its medium („medium-specificity‟) paint should not be used to depict objects that

are three-dimensional or create illusions of space. He believed that in the „flatness‟ there was a purity that would allow for the true aspects of painting. “Greenberg always used the word &#39;purity&#39; in quotes. “Greenberg spoke not of realising „purity‟, but of a desire for purity” – In Visible Touch: Modernism and Masculinity. Terry E. Smith 2. Greenberg can sometimes be seen as a collaborator of artist‟s works; he is known to have given studio visits stating the orientation of the canvas and collaborating in the artistic process. Morris Louis was one of the artists he influenced and even after Louis‟ death Greenberg edited stripes and dimensions of his work. 3. Colorado Springs has a rich history; once a gold mining city, now its main industry is Defence, with the US military having both Army and Air Force bases there. There are high numbers of UFO sightings as well lightning strikes; the reason Nikola Tesla moved there from 1899-1900. Friends with Thomas Edison and Mark Twain, Serbian born Tesla was an eccentric, recluse and showman, who always did things in threes. Tesla was an inventor in the field of electromagnetism; x-rays, radio waves and a teleforce weapon the „Death-Ray‟. Colorado Springs is also home to the Ute Indians since 1500 A.D. (who used the friction from quartz crystals in ceremonies to produce light), Colorado Springs has beautiful natural features such as Pikes Peak, Garden of the Gods, Seven Falls and Cave of the Winds. “The second-largest city is home to a bizarre amalgamation of evangelical Christians, military families and ultra-liberal college students (not to mention the hollowed-out mountain where the president would weather a nuclear strike).” 99 themed itineraries across America. Lonely planet. 4. The term “viable essence” was quoted by Greenberg in a Mark Rothko biography: “...a discarding of “expendable conventions”–e.g., figuration– in a quest to reduce painting “to its viable essence”.” Mark Rothko: A Biography. James E. B. Breslin. 5. Crystals can be used for healing purposes where certain stones relate to certain ailments. For example the Amethyst crystal (meaning „not intoxicated‟ in ancient greek) used to be used to prevent the wearer from getting drunk. Today it is still believed to have purification qualities and is used to aid people with addictions. 6. A dreamcatcher is a Native American object of belief made up of a circle with a net woven within it and feathers hanging off it. According to the Ojibwa tribe a dreamcatcher is able to catch a person‟s dreams, where the bad dreams get caught in its net and are obliterated in the light of day and the good dreams are able to pass through the feathers to the sleeper. 7. Both Louis and Noland visited Helen Frankenthaler in her studio in 1953 where they saw her painting, Mountains and Sea (1952). They were influenced by Helen Frankenthaler (who, for a while, lived with Greenberg in New York, studied with Hans Hoffman, was influenced by Jackson Pollock and later married Robert Motherwell in 1957). Frankenthaler was a pioneer of the „stain painting technique‟ where the paint is reduced to a watery fluid that soaks into the unprimed canvas, leaving not a skin of paint but a light wash of colour, complying with Greenberg‟s theories of „medium specificity‟ and „flatness‟.