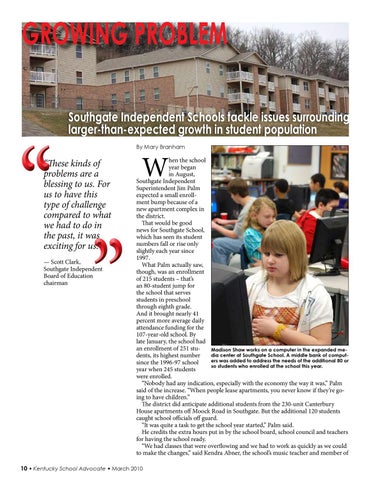 “These kinds of problems are a blessing to us. For us to have this type of challenge compared to what we had to do in the past, it was exciting for us.”

hen the school year began in August, Southgate Independent Superintendent Jim Palm expected a small enrollment bump because of a new apartment complex in the district. That would be good news for Southgate School, which has seen its student numbers fall or rise only slightly each year since 1997. What Palm actually saw, though, was an enrollment of 215 students – that’s an 80-student jump for the school that serves students in preschool through eighth grade. And it brought nearly 41 percent more average daily attendance funding for the 107-year-old school. By late January, the school had an enrollment of 251 stuMadison Shaw works on a computer in the expanded media center at Southgate School. A middle bank of computdents, its highest number ers was added to address the needs of the additional 80 or since the 1996-97 school so students who enrolled at the school this year. year when 245 students were enrolled. “Nobody had any indication, especially with the economy the way it was,” Palm said of the increase. “When people lease apartments, you never know if they’re going to have children.” The district did anticipate additional students from the 230-unit Canterbury House apartments off Moock Road in Southgate. But the additional 120 students caught school officials off guard. “It was quite a task to get the school year started,” Palm said. He credits the extra hours put in by the school board, school council and teachers for having the school ready. “We had classes that were overflowing and we had to work as quickly as we could to make the changes,” said Kendra Abner, the school’s music teacher and member of The flagship publication of the Kentucky School Boards Association

The flagship publication of the Kentucky School Boards Association