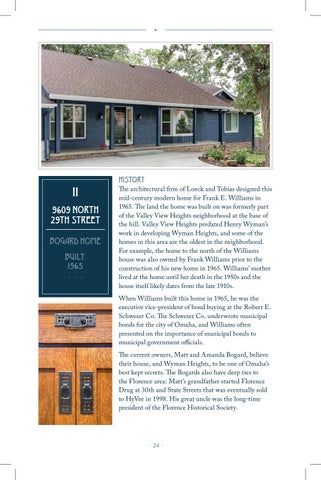 HISTORY The architectural firm of Loeck and Tobias designed this mid-century modern home for Frank E. Williams in 1965. The land the home was built on was formerly part of the Valley View Heights neighborhood at the base of the hill. Valley View Heights predated Henry Wyman’s work in developing Wyman Heights, and some of the homes in this area are the oldest in the neighborhood. For example, the home to the north of the Williams house was also owned by Frank Williams prior to the construction of his new home in 1965. Williams’ mother lived at the home until her death in the 1950s and the house itself likely dates from the late 1910s. When Williams built this home in 1965, he was the executive vice-president of bond buying at the Robert E. Schweser Co. The Schweser Co. underwrote municipal bonds for the city of Omaha, and Williams often presented on the importance of municipal bonds to municipal government officials. The current owners, Matt and Amanda Bogard, believe their house, and Wyman Heights, to be one of Omaha’s best kept secrets. The Bogards also have deep ties to the Florence area: Matt’s grandfather started Florence Drug at 30th and State Streets that was eventually sold to HyVee in 1998. His great uncle was the long-time president of the Florence Historical Society. 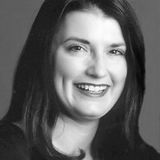 Featuring the history and photographs of the Wyman Heights neighborhood. Located just north of Interstate 680 on North 29th and North 30th...

Featuring the history and photographs of the Wyman Heights neighborhood. Located just north of Interstate 680 on North 29th and North 30th...