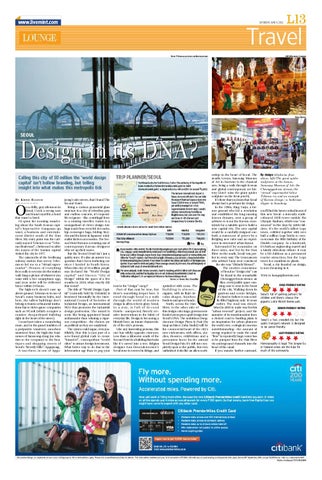 Design in its DNA? Calling this city of 10 million the ‘world design capital’ isn’t hollow branding, but telling insight into what makes this metropolis tick B Y K RISH R AGHAV ···························· n a chilly, grey afternoon in Seoul, I took a wrong turn and found myself in a hotel that wasn’t a hotel. I’d spent the morning wandering about the South Korean capital’s hyperactive Gangnam-gu ward, a business and entertainment district south of the Han River. My entry point was the curiously named Teheran-ro or “Teheran Boulevard”, christened so after the mayor of the Iranian capital visited the city in 1977. The catacombs of the Seolleung subway station that serves Teheran-ro led me to a “virtual supermarket”: Pictures of everything from milk to sex toys dot the station wall. Snap a picture of whatever you want with a free smartphone app, and your order will be delivered home within 24 hours. The high-tech doesn’t ease up above ground. Teheran-ro is one of Seoul’s many business hubs, and here, the tallest buildings don’t belong to banks or financial institutions but to video-game companies such as NCsoft (which occupies a massive chequerboard building right in the heart of the street). I must have taken a meandering route, and in the grand tradition of a peripatetic wanderer, somehow sauntered from the high-rise businesses of Samseong-dong (no relation to the company) to the boutiques and shopping streets of Seoul’s “Beverly Hills”: Apgujeong. It was there, in one of Apgu-

jeong’s side streets, that I found The Second Hotel. Being a curious pyramidal glass structure in a city of relentless grey and endless concrete, it’s impossible to ignore—like centrifugal force to a rotating traveller. Inside is a smorgasbord of clever design: tote bags made from recycled rice sacks, hip messenger bags, folding bicycles and the latest in Japanese minimalist kitchen accessories. The Second Hotel features a rotating cast of contemporary Korean designers who set up their wares. But the Second Hotel isn’t just a quirky store. It’s also an answer to a question that’s been bothering me since I landed in South Korea. When this city of 10 million people was declared the “World Design capital” and Unesco “City of Design” within the space of a few months in 2010, what exactly did that mean? The title of “World Design Capital” (currently held by Helsinki) is bestowed biennially by the International Council of Societies of Industrial Design, an international NGO that promotes the industrial design profession. The award is more like being appointed brand ambassador than winning a rigorous competition—the choices are as political as they are analytical. The cynics could argue, even justifiably, that this is just part of a new-found global rush to create “branded”, cosmopolitan “world cities” to attract foreign investment. What better way to do that in the information age than to peg your

tent in the “design” camp? Part of that may be true, but there’s something deeper here. A trawl through Seoul is a walk through the world of modern design in all its eclectic glory. Seoul, in a way, is full of Second Hotels—unexpected, fiercely creative interventions in the fabric of everyday life. Design is becoming a lifestyle here, an innate characteristic of the city’s persona. Like any interesting persona, this one has wildly opposite extremes. Less than a kilometre south of the Second Hotel is a building that looks like it’s carved into a tree. Belgian designer Ann Demeulemeester’s Seoul store is covered in foliage, and

sprinkled with moss. The building is almost... organic, with its fluid circular shapes, bamboo borders and green facade. North, across the Han River, is the other side of this design coin: large, governmentfunded attempts to graft design into Seoul’s DNA. The ambitious Dongdaemun Design Plaza & Park (by Iraqi architect Zaha Hadid) will be the commercial heart of the city’s new endeavours, with offices, studios, theatres, exhibitions and a permanent home for the annual Seoul Design Fair. It’s still not completely open to the public, but even unfinished it sits like an alien moth-

ership in the heart of Seoul. The nearby Leeum, Samsung Museum of Art in Itaewon is the classical arm, being a walk through Korean and global contemporary art history (don’t miss the giant spider sculpture on the front porch). It’s there that you learn that Seoul always had a penchant for design. In the 1390s, King Taejo, a former general who led a revolution and established the long-running Joseon dynasty, sent a group of advisers to scour the Korean countryside for a suitable spot to build a new capital city. The new capital would be a carefully designed one: both a statement of power by a fledgling new ruler and an experiment in structured urban layout. Surrounded by mountains on three sides, and fed by the Han River on the south, Seoul was perfect in every way: The Geomancers who advised Taejo were convinced the site was “divinely blessed”. The modern cornerstone of Seoul as “design city” can be found in the remarkable Cheonggyecheon stream: an 8km creek/public space running east to west in the heart of the city. Walking down its gardens and scenic bridges, it’s hard to believe it was a traffic-filled highway only 10 years earlier. The road was demolished in 2003 to make way for this “urban renewal” project, and the narrative of its transformation from a choked road to bustling plaza is an inspiration for urban planners the world over, ecological concerns notwithstanding—the amount of energy required to make the canal “flow” is reportedly huge; water has to be pumped from the Han River via underground channels into the head of the canal. If you wander further eastward,

By design: (clockwise from above, left) The giant spider sculptures at the Leeum, Samsung Museum of Art; the Cheonggyecheon stream; the ‘virtual’ supermarket below Teheran­ro; and an example of Korean design—a bathroom slipper in Insadong. you’ll find the latest embodiment of this new Seoul: a riotously multicoloured 105ft tower outside the Olympic Stadium, which was “constructed” in five days by 4,000 children. It’s the world’s tallest Lego tower, cobbled together with over half a million Lego bricks to commemorate the 80th birthday of the Danish company. As a landmark, it’s both an engineering marvel and a faintly ridiculous tribute. It may be a bit dubious as a permanent tourist attraction, but the Lego tower is a manifesto in plastic. Seoul, a city founded on design, is now dreaming in it. Write to lounge@livemint.com CHILD­FRIENDLY RATING

Seoul’s a fast, crowded city but the public transport network is designed to be senior­friendly. LGBT­FRIENDLY RATING

Homosexuality is legal. The Jongno­Gu or Itaewon areas are the hubs for much of the community.

Design In Its DNA?

Design In Its DNA?