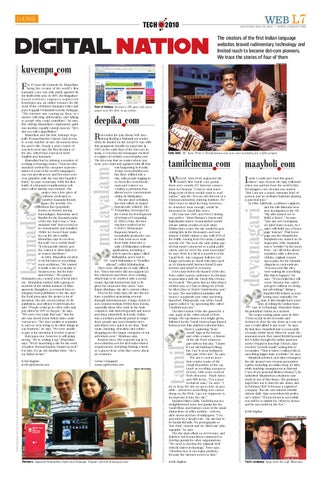 The creators of the first Indian language websites braved rudimentary technology and limited reach to become dot­com pioneers. We trace the stories of four of them

Early bird: M. Anto Peter’s Tamilcinema.com was once mistaken for a film project.

hen M. Anto Peter registered the world’s first Tamil .com portal, there were exactly 257 Internet connections in Chennai. “I had to start something most of them would want to read online,” says the 43-year-old director of a Chennai animation training institute. He didn’t have to think for long. Everyone, he reasoned soon enough, would be interested in Tamil film news. The year was 1997, and Peter’s timing was perfect—Mani Ratnam’s Iruvar and Rajinikanth-starrer Arunachalam would release within months of each other. Within three years, the site would be generating hits in the thousands, and now attracts 150,000 visitors a day, with 45% of the traffic coming from Sri Lanka, Canada and the US. “We were the only online portal that wasn’t connected to a print publication, and yet we’re the most successful,” he says. Peter is a bit of a maverick of the Tamil Web—his company Softview Ltd brings out books in Tamil with titles such as 24 Maninerattil Internet-Email (Learn Internet and Email in 24 hours). A few days before the launch of the site, Peter called a press conference in Chennai in association with the Tamil Film Producers Council. “The press had no idea what a website was, so I had to bring out a booklet titled How to Watch Tamilcinema.com,” he says. The assembled journalists still weren’t completely sure what was being launched. Playing safe, one of the Tamil papers called it “an upcoming film called Tamilcinema.com”. The first version of the site passes for a case study of the 1990s school of Web design. The top banner is in bright green, followed by the Tamil Cinema logo framed between two thin rainbow-coloured lines. There’s a spinning “Send email” logo at the bottom and a hits counter—a feature of the site Peter refuses to part with to this day. “I know it’s an old-fashioned thing, but I see it as an indispensable part of the site,” he says. The site’s current iteration retains many of the visual flourishes of the era (such as scrolling marquees of text), with more modern Web elements—Flash video and RSS feeds. “I’m a pure technical man,” he says. “I try to keep the site as up-to-date as possible—whenever something new comes along on the Web, I get my engineers to incorporate it into the site.” Updated thrice daily, Tamilcinema is a straightforward news and gossip site for Tamil films, and features most of the usual distractions of a film website—reviews, slide shows and lots of wallpapers. “I try and stick by a simple rule—the site has to be family-friendly. No pornography or ‘low-class’ content and no ‘third-rate’ photographs,” he says. The site stays afloat on ad revenue, and Softview Ltd is sometimes contracted to develop portals for other organizations. “We need to develop the regional Web with the latest technology,” Peter says. “Obsolescence is our major problem, because the Internet moves so fast.” Krish Raghav

wish I could say I had this grand vision,” says 44-year old Ajay Gallewale when you ask him how the world’s first Devanagari .com domain was started. “But I am not a smart, visionary kind of person, just an ordinary husband playing a practical joke.” In 1996, Gallewale, a software engineer, and his wife Bhavana were new immigrants to the US. “My wife wanted me to build a ‘home’,” he says. “Like any new immigrant, we didn’t have money. So I said I will build you a ‘home page’ instead.” That home page was the Marathi site Maayboli.com, started on 16 September 1996. Maayboli was a “website” in the truest form—an “all-of-the-above” repository with a directory of links, original content and a place for the Marathi diaspora to communicate. “It seems now like they were waiting for something like that to happen,” he says. “‘If you build they will come’ became true, and it just grew without we doing any advertising.” Being a Marathi NRI helped, as marketing came naturally. For Ajay, it also bought back memories of editing the Indian Institute of Technology, Mumbai’s Marathi periodical Tantra as a student. The major turning point came in 2001. “I lost my job in the recession and decided to close the site down as I was not sure I could afford it any more,” he says. By that time, Maayboli had a community of nearly 20,000 users. When he made the announcement, they raised $4,000 (around Rs1.9 lakh) through the online payment service Paypal in less than 3 hours. Ajay received “several emails” asking him to reconsider. “That is when I realized this is something bigger than a website,” he says. Maayboli survived, and Ajay redesigned the site around new revenue-generation outlets, including an online shop. In 2005, while studying management at Harvard (“one of my personal lifetime dreams”), he submitted Maayboli as a business case study in one of his classes. The professor urged him not to shut the site down, and in February 2007 it became a registered company. The site now attracts 140,000 visitors daily. Ajay remembers his professor’s advice: “If your dream is successful, you will be a catalyst for others to dream and be successful on the Net.”

emember the joke about Neil Armstrong finding a Malayali tea vendor when he landed on the moon? It was with this peripatetic Keralite in mind that in 1997, in the early days of the dot-com in India, a 110-year-old newspaper decided to register its website www.deepika.com. The idea was that no matter where you were, you could stay updated with all that was happening in Kerala. Today, www.deepika.com has three million hits a day, with people logging in to check live news broadcasts and connect on e-kathu, a provision that allows you to communicate online in Malayalam. The site used a Malayalam font called, in typical bureaucratic sobriety, MLTTKarthika. Developed by the Centre for Development of Advanced Computing (C-DAC), Pune, the font was later worked on by C-DAC’s Thiruvananthapuram branch, a remarkably productive centre that went on to work these basic fonts into a suite of Malayalam software applications, including a text-to-speech engine called Subhashini, and a tool to teach Malayalam to “Keralites abroad”, called Ezhuthachan. There were still plenty of early difficulties. “Some browsers did not support (a) few characters and those were missing, which had to be resolved with a workaround. Special instructions had to be given for Linux and Mac users,” says Rojan Abraham, the site’s current editor. Even in the early days, the site did not have a problem generating revenue through advertisements. A large chunk of non-resident Indians (NRIs) from Kerala, especially those who work in the Arab countries, visit India frequently and invest and shop extensively in Kerala. Online was a medium perfectly poised to target these people and www.deepika.com’s advertisers were quick to see that. “Real estate, banking, education and online shopping are the largest categories of our advertisers now,” Abraham says. Readers from 180 countries log in to www.deepika.com for all Kerala-related requirements, including finding a bride or a groom from a list that covers about 20 countries.

Part of history: Kerala’s 110­year­old news­ paper was the first to go online.

or 37-year-old Gyanesh M. Khanolkar, being the creator of the world’s first Kannada .com was only partly sparked by the thrill of the new. In 1997, the Bangalorebased software engineer registered Kuvempu.com, an online resource for the work of the celebrated Kannada writer and poet, Kuppali Venkataiah Gowda Puttappa. “The Internet was coming up then, so I started collecting information, and talking to people who could contribute,” he says. But driving Khanolkar’s exploratory spirit was another, equally central concern: “He’s also my wife’s grandfather.” Khanolkar and his wife, Eshanye Kuppalli Poornachandra Tejaswi, had access to a vast number of rare documents from the poet’s life. Nearly a year’s worth of research went into the first iteration of the site, which had content in both English and Kannada. Khanolkar had to sidestep a number of teething technology issues. “Unicode (the standard method for computer representation of most of the world’s languages) was not prevalent yet, and browsers were very primitive with the way they handled fonts,” he says. In January 1998, the first build of a Kannada transliteration software called Baraha was released. The project was a free piece of software dedicated to another Kannada literary figure, the novelist A.N. Krishna Rao (popularly known as Anakru among Kannadigas). Khanolkar used Baraha for the Kannada parts of the site, but it was a “nonstandard tool” that needed to be downloaded and installed. While he doesn’t have statistics on the site’s traffic, Khanolkar says he receives fan mail “on a weekly basis”. “It’s frequently visited, and the content is often linked to or reused elsewhere.” In 2001, Khanolkar decided to try his hand at something more ambitious. “We wanted to build a site very similar to Amazon.com, but for Kannada books.” The project, Udayaravi.com, created a lot of local interest—Khanolkar worked with a group of students of the Indian Institute of Management, Bangalore, to research how to integrate local publishers to the site, and the local press gave the project a lot of attention. The site covered about 25-30 publishers, and offered 25,000 books for sale. “People could go to cyber cafés and pay either by VPP or cheque,” he says. “We were very rustic that way.” But the site was closed down before sales could commence. “We were unable to maintain it, and we were trying to do other things in our business,” he says. “We were unable to give it the attention it needed to grow.” Kuvempu.com, however, is still going strong. “We’re scaling it up,” Khanolkar says. “We’re launching a site for the work of author Poornachandra Tejaswi as well.” For him, it’s an old, familiar drive. “He’s my father-in-law.”

An attempt to unocver India's earliest Internet pioneers as the dotcom turns 25.

An attempt to unocver India's earliest Internet pioneers as the dotcom turns 25.