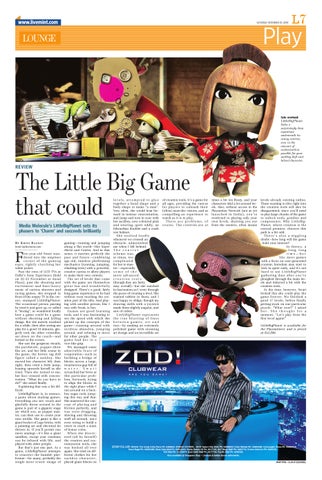 Cute overload: LittleBigPlanet hides a surprisingly deep experience underneath its cutesy exterior, even in the amount of customization possible for your sackboy (left and below) character.

···························· ive-year-old Swati wandered into the emptiest corner of the gaming expo, tightly clutching her white jacket. Past the rows of LCD TVs at Delhi’s Sony Experience (held on 22-23 November at Ansal Plaza), past the shouting and excitement and bass-heavy music of various shooters and racing games, she stopped in front of the empty TV in the corner, stamped LittleBigPlanet. The occasional person passing by tried it and gave up, or called it “boring”, or wondered loudly how a game could be a game without shooting and killing things. But she merely watched for a while, then after seeing me play for a good 10 minutes, gingerly took the other controller, sat down on the couch—and looked at the screen. She saw the gorgeous visuals, the patchwork, puppet-show like art, and her little avatar in the game, the brown rag doll figure called a sackboy. She moved her character left, then right, then tried a little jump, leaning upwards herself as she tried. Then she turned to me, her face creased with concentration. “What do you have to do?” she asked finally. Explaining that was a bit difficult. LittleBigPlanet is, in essence, a game about making games. Everything you see, touch and gleefully throw around in the game is part of a gigantic stage set which you, as puppet master, can then use to create your own worlds. The game is like a giant bucket of Lego bricks, with a painting set and electrical kit thrown in. If you’ll permit one more analogy—it’s like a giant sandbox, except your creations can be infused with life, and played with other people. But that’s just one part. As a game, LittleBigPlanet attempts to resurrect the humble platformer—for many, probably the single most iconic image of

gaming—running and jumping along a flat world—like Super Mario and Contra. And in that sense, it marries perfectly the past and future—combining age-old, timeless platforming mechanics (running, jumping, climbing trees) with a powerful, creative canvas to allow players to make their own content. The set of levels that come with the game are themselves great fun and wonderfully designed. There’s a good, fairly long game experience to be had without even touching the creation part of the title. And playing with another person, like I was with Swati, is fun. Games are good learning tools, and it was fascinating to see the speed with which she picked up the concepts of the game—running around with reckless abandon, jumping around, and refusing to move for other people. The game had her in a vice-like grip. We managed some admirable feats of cooperation—such as building a bridge of blocks across a large, treacherous gap full of w a t e r . S w a t i scrunched her brow at this particular problem, furiously trying to align the blocks in the right place while I ran around on a Sackboy sugar rush, jumping this way and that. She mastered the concept of placing and friction perfectly, and was soon dragging, shoving and throwing stuff all around, once even trying to build a tower to reach a stack of bonus coins. When she discovered (all by herself) the creation and customization tools, she was hooked all over again. She tried on different clothes for her sackboy character, placed giant blocks on

levels, attempted to glue together a head shape and a body shape to make “a man”. Very often, she would lean forward in intense concentration, and jump and turn in sync with her sackboy, now coloured pink and wearing, quite oddly, an Edwardian doublet and a crash test helmet. She exulted loudly whenever we crossed an obstacle, admonished me when I fell behind. The control scheme was, at times, too complicated for her to master—especially some of the more advanced creation tools (though they are fairly easy overall)—but she watched in fascination as I went through the paces of creating a level. She wanted rabbits in them, and I was happy to oblige, though my drawing skills with a joystick made them slightly angular, and sort of cubist. LittleBigPlanet represents the true blurring of lines between games, art and toys—by making an extremely polished game with stunning art design and an incredible set

of creation tools. It’s a game for all ages, providing the canvas for players to unleash their (often) anarchic visions, and as compelling an experience to watch as it is to play. There are problems, of course. The controls are at

times a bit too floaty, and your characters skid a lot around levels. Also, without access to the Playstation Network (not as yet launched in India), you’re restricted to playing only your own levels, shutting you out from the esoteric, often insane

levels already existing online. Those wanting to dive right into the creation tools will also be disappointed, since you’ll need to play large chunks of the game to unlock tools, goodies and components. Why LittleBigPlanet, where creation is the central premise, chooses this path is a bit odd. There’s also a niggling doubt—how long will the game hold your interest? In theory, a long, long time—but like most games with a focus on user-generated content, boredom may start to kick in quite early, and it’s not hard to see LittleBigPlanet gathering dust after you’ve ploughed through the main levels and tinkered a bit with the creation tools. At the time, however, Swati looked like she could play the game forever. We finished a good 17 levels, before finally getting stuck on one particular puzzle. “What now?” I asked her. She thought for a moment. “Let’s play from the first level again!” LittleBigPlanet is available for the Playstation3, and is priced at Rs2,899. 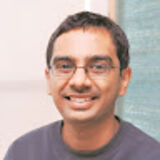