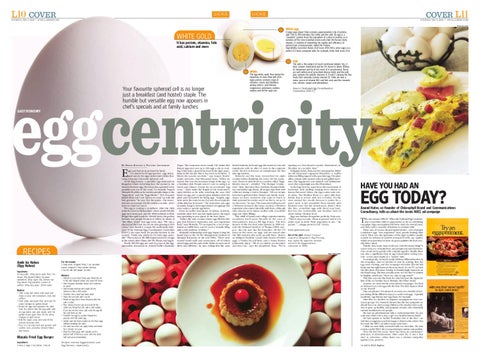 A large egg (about 50g) contains approximately 6.3g of protein, split 55% to 45% between the white and the yolk. An egg is a “complete” protein food, the equivalent of a shot of protein, as it contains all the nine essential amino acids that the human body requires. A method of evaluating the quality and efficiency of protein that a food provides, called the Protein Digestibility­Corrected Amino Acid Score (PDCAAS), rates eggs as a perfect 1/1 food, compared with, for example, fruits that score 0.76.

Your favourite spheroid cell is no longer just a breakfast (and hostel) staple. The humble but versatile egg now appears in chef’s specials and at family lunches

The egg white, apart from being the repository of more than half of an egg’s protein, contains many B vitamins—niacin and riboflavin, among others—and chlorine, magnesium, potassium, sodium, sulphur, and all the egg’s zinc.

The yolk is the subject of much nutritional debate. Yes, it does contain cholesterol and fat. It’s home to about 190mg of cholesterol and 5g of fat, most of it unsaturated. These are well within most prescribed dietary limits and the yolk also contains fat­soluble vitamins A, D and E (among the few foods that naturally contain vitamin D). Yolks are also a minor source of vitamin B12 and folic acid, and the minerals iron, calcium, copper and phosphorus. Source: National Egg Coordination Committee (NECC)

B Y K RISH R AGHAV & P AVITRA J AYARAMAN ··········································· ggs and bad puns go hand in hand. It’s almost to be egg-spected—egg-stravagant names for eggs-perimental dishes featuring everyone’s favourite spheroid cell. At the Egg Factory, a speciality egg restaurant in Bangalore where everything from the starters to the desserts features eggs, the menu has squeezed every possible pun out of the word. Co-founder Yogesh Mokashi chuckles as he watches people cringe at the “Eggxoticas” and the “Eggcellents”. “(Co-founder) Rajesh (Pai) and I are known to come up with the best groaners,” he says. But the guests—the restaurant sees an average of 4,000 visitors a month—don’t seem to mind too much. The egg is making a comeback. After the 2006 avian flu scare in Maharashtra, where nearly 600,000 eggs were destroyed, and the 2008 outbreak in West Bengal that spelt death for 500,000 birds, the poultry industry saw people hesitant to follow its diktat of “Roz Khao Andey” (eat eggs every day). “We saw a dip around that time, but we are now growing at 10% a year,” says Harish C. Juneja, the north India chairman of the National Egg Coordination Committee (NECC), the apex body for poultry farmers in the country. “India now produces 14 crore eggs annually.” That makes it the fifth largest producer of eggs in the world, after China, the US, Russia and Japan. Nearly 182,500 eggs are used in a year at the Eggspectation restaurant in central Delhi’s Rajinder

hostel residents, he found eggs the easiest to cook and experiment with. So after 12 years in the corporate world, his itch to become an entrepreneur led him into egg territory. Mokashi and his team researched for eight months before finalizing the menu for the restaurant. Closest to their hearts is a section called “Eggxilirative Snacks”, subtitled “The Manipal Connection”. Here, they have Bun Omelette, Kannan Bullseye and boiled egg bhurji, all recipes that their chef collected during a visit to Manipal. “All our recipes have been gathered from friends and family. Sometimes, we have customers who want to teach us their personal favourites and if we like it, we put it on the menu,” he says. The restaurant will soon add a Mexican section to the menu courtesy a Mexican expatriate who shared his skills with them, although they already serve fajitas stuffed with scrambled eggs and other fillings. This whiff of hostel and college experimentation manifests itself quite literally in the case of Ahmedabad’s famous RK Egg Eatery. The first branch of this fast-food joint opened in 1999 outside the National Institute of Design (NID) campus—the city now has five branches. All the 170 items on the menu use eggs, and are named after the NID students who came up with them—there’s an Abhijeet Omelette (made with chunks of boiled egg), a Varsha Fry (oil-free), and a Sunny Keema (extremely spicy). “All of our dishes are inventive and low-cost,” says the proprietor, Raju. “We’re

opening our first branch outside Ahmedabad, in Mumbai, in a month’s time.” At Eggspectation, Kain says the most popular dishes are the restaurant’s signature Benedicts—a muffin with meat filling topped with a poached egg. The place offers variants with smoked salmon and grilled tomatoes (The Eggstreme) and spinach and hollandaise sauce (the surprisingly pun-free Florentine). At the Egg Factory, apart from the assortment of omelettes with stuffing ranging from cheese to lemon-flavoured chives, the egg curries take centre plate. The Malabar Roast is a spicy dish from Kerala that is served with rice or bread. On the most wanted list, mostly because it makes for a quick meal, is the scrambled Parsi Akoorie with buttered toast. For the adventurous, there’s Moo Shu Rou, scrambled eggs with diced soya ham, that has the comfortable and familiar taste of street Indian-Chinese food. Eggs and Indians fit together perfectly, Kain says. “They’re easy to make, cheap to procure and it’s an entire meal in itself. Their popularity is not...” he pauses. “...uneggs-pected at all.” Groan. krish.r@livemint.com Out of the shell: (below) Caramel custard at Bangalore’s Egg Factory; (top, right) the signature omelette served at the Eggspectation restaurant in Delhi.

Method • Add oil in a non­stick frying pan. When the oil is hot, add chopped onions and sauté till brown • Add chopped coriander leaves and continue to sauté • Add tomato ketchup and sauté till the mixture is like a thick paste • Transfer into a bowl and keep aside • Clean the pan and add 1 tsp oil • Break an egg into a bowl, ensuring that the yolk is intact • Pour slowly into the pan and cook till the white has firmed but the yolk is still wobbly. If you do not like runny yolk, cook the egg till the yolk firms up too • Transfer the egg to a plate. Repeat the process with the other egg • Gently coat the thick masala on the fried eggs without breaking the yolks • Cut each bun into two, apply butter and toast for a minute on a pan • Place the fried eggs with masala on the bottom half of the bun, cover with the other half and serve immediately

Method • Take a pan, boil water, add sugar and make a syrup with cardamom, clove and saffron • Heat ‘ghee’, add gram flour and cook till colour changes to golden brown • Break the eggs and separate the yolks from the whites. Mix the egg yolks with an egg beater and cook slowly with the golden brown gram flour till the colour changes to light brown • Add the sugar syrup and cook till the mixture becomes thick • Pour in a serving bowl and garnish with cashew nuts, pistachio, almond flakes and raisins

Nagar. The restaurant serves nearly 100 dishes that feature eggs and uses up to 500 eggs a day in cooking. It has seen a gradual increase in the egg’s popularity in the decade that it has been in business. “I blame the masala omelette,” says Jaypee Hotels’ senior executive chef Shivanand Kain. “When we started, that was the dominant image of the egg—as a breakfast dish. People weren’t used to eating it at lunch and dinner, except for an occasional ‘egg curry’.” Kain walks the length of the restaurant’s open kitchen as he talks, watching the sous chef break an egg over a special glass-finished steel hot plate used exclusively for frying eggs. “Largely, eggs were never the main course, but now the acceptance of the dish has increased.” The restaurant uses eggs in salads, burgers, beverages (based on eggnog) and even makes a special egg halwa. From its earlier dominance of railway canteens, roadside street food and late-night snacks, the egg is now spreading to new places in the food chain. “India’s the only country where eggs fill this nice grey line between vegetarian and non-vegetarian food,” says Mokashi. “It’s accepted by a lot of vegetarians as edible food, and it’s such a versatile thing with a rich tradition of dishes.” Mokashi’s relationship with eggs began during his hostel days at the TA Pai Management Institute in Manipal, Karnataka, in the mid-1990s. “There were several small stalls and restaurants, all of which served eggs, and the taste of the dishes at each one of them was different,” he says, adding that like most

HAVE YOU HAD AN

his was around 1986-87. When the National Egg Coordination Committee (NECC) approached us for an advertising campaign. Egg consumption had been static for several years, and there were a number of barriers to contend with. There was, of course, the perception barrier—a lot of people considered eggs “non-vegetarian” food, greatly limiting their reach. There was also ignorance of the egg’s nutritive quality outside its richness in protein (compared with, say, apples, which were perceived to have do-good qualities the fruit actually didn’t have). Thirdly, how many ways could you cook the damn thing? It wasn’t seen as a versatile food, and people assumed that boredom would set in quickly with a regular egg diet. Finally, there was also a significant drop in egg consumption during summer—it was seen mostly as a “winter” dish. So strategically, we had to tackle all these different barriers in the campaign—and we decided to start by making, first, the egg seem exciting, and the campaign educative (hit the left brain and the right brain at the same time). So, for TV, we had the Meri Jaan, Meri Jaan, Sunday ke Sunday jingle, based on an old Hindi song. The idea actually came out of a line I’d written in English, which was “Have you had an egg today?” That line was also the basis for what became the signature line of the ad: Sunday ho ya Monday, Roz Khao Andey. In print, we went for the educational campaign. Our first ad featured an oval egg with the line The Best Square Meal in the World? That was phase I. For phase II, we took out a booklet of recipes, listing all the different ways you could cook eggs—Spanish omelettes, egg biryani and egg chaat, for example. After this, we decided on targeted campaigns for core consumer groups. Our research showed that the two categories we should focus on were young children, who needed extra nutrition to grow up healthy, and pregnant women, who essentially needed nutrition for two people. We had an advertisement with a controversial line: Do you wish your child to be a boy, a girl or a healthy bouncy baby? We had spoken to Sachin Tendulkar also at the time—we told him youngsters would be happy to listen to his advice. But he made his NECC ad debut many years later. I think we were fairly successful with our execution. We won awards, and for NECC the commercial repercussions were positive. Over the last few years, there has been an understandable lack of advertisements. After avian flu, it was a bad time to advertise—when there was a distinct antipathy against your product. As told to Krish Raghav.

Your favourite spheroid cell is no longer just a breakfast (and hostel) staple. The humble but versatile egg now appears in chef’s specials...

Your favourite spheroid cell is no longer just a breakfast (and hostel) staple. The humble but versatile egg now appears in chef’s specials...