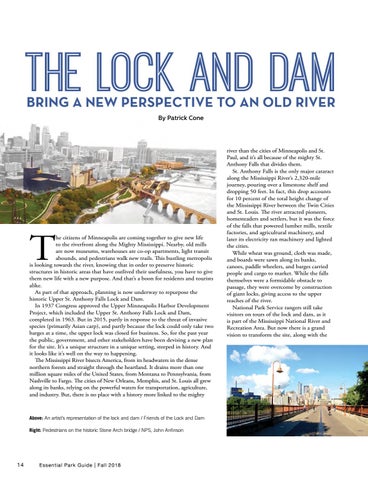 he citizens of Minneapolis are coming together to give new life to the riverfront along the Mighty Mississippi. Nearby, old mills are now museums, warehouses are co-op apartments, light transit abounds, and pedestrians walk new trails. This bustling metropolis is looking towards the river, knowing that in order to preserve historic structures in historic areas that have outlived their usefulness, you have to give them new life with a new purpose. And that’s a boon for residents and tourists alike. As part of that approach, planning is now underway to repurpose the historic Upper St. Anthony Falls Lock and Dam. In 1937 Congress approved the Upper Minneapolis Harbor Development Project, which included the Upper St. Anthony Falls Lock and Dam, completed in 1963. But in 2015, partly in response to the threat of invasive species (primarily Asian carp), and partly because the lock could only take two barges at a time, the upper lock was closed for business. So, for the past year the public, government, and other stakeholders have been devising a new plan for the site. It’s a unique structure in a unique setting, steeped in history. And it looks like it’s well on the way to happening. The Mississippi River bisects America, from its headwaters in the dense northern forests and straight through the heartland. It drains more than one million square miles of the United States, from Montana to Pennsylvania, from Nashville to Fargo. The cities of New Orleans, Memphis, and St. Louis all grew along its banks, relying on the powerful waters for transportation, agriculture, and industry. But, there is no place with a history more linked to the mighty

Above: An artist’s representation of the lock and dam / Friends of the Lock and Dam Right: Pedestrians on the historic Stone Arch bridge / NPS, John Anfinson

river than the cities of Minneapolis and St. Paul, and it’s all because of the mighty St. Anthony Falls that divides them. St. Anthony Falls is the only major cataract along the Mississippi River’s 2,320-mile journey, pouring over a limestone shelf and dropping 50 feet. In fact, this drop accounts for 10 percent of the total height change of the Mississippi River between the Twin Cities and St. Louis. The river attracted pioneers, homesteaders and settlers, but it was the force of the falls that powered lumber mills, textile factories, and agricultural machinery, and later its electricity ran machinery and lighted the cities. While wheat was ground, cloth was made, and boards were sawn along its banks, canoes, paddle wheelers, and barges carried people and cargo to market. While the falls themselves were a formidable obstacle to passage, they were overcome by construction of giant locks, giving access to the upper reaches of the river. National Park Service rangers still take visitors on tours of the lock and dam, as it is part of the Mississippi National River and Recreation Area. But now there is a grand vision to transform the site, along with the From a vast fascinating underworld in western South Dakota to the mighty Mississippi in Minnesota on down to Florida where "supercolonies" d...

From a vast fascinating underworld in western South Dakota to the mighty Mississippi in Minnesota on down to Florida where "supercolonies" d...