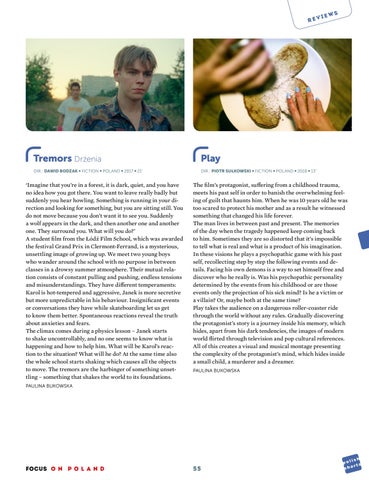 ‘Imagine that you’re in a forest, it is dark, quiet, and you have no idea how you got there. You want to leave really badly but suddenly you hear howling. Something is running in your direction and looking for something, but you are sitting still. You do not move because you don’t want it to see you. Suddenly a wolf appears in the dark, and then another one and another one. They surround you. What will you do?’ A student film from the Łódź Film School, which was awarded the festival Grand Prix in Clermont‑Ferrand, is a mysterious, unsettling image of growing up. We meet two young boys who wander around the school with no purpose in between classes in a drowsy summer atmosphere. Their mutual relation consists of constant pulling and pushing, endless tensions and misunderstandings. They have different temperaments: Karol is hot‑tempered and aggressive, Janek is more secretive but more unpredictable in his behaviour. Insignificant events or conversations they have while skateboarding let us get to know them better. Spontaneous reactions reveal the truth about anxieties and fears. The climax comes during a physics lesson – Janek starts to shake uncontrollably, and no one seems to know what is happening and how to help him. What will be Karol’s reaction to the situation? What will he do? At the same time also the whole school starts shaking which causes all the objects to move. The tremors are the harbinger of something unsettling – something that shakes the world to its foundations.

The film’s protagonist, suffering from a childhood trauma, meets his past self in order to banish the overwhelming feeling of guilt that haunts him. When he was 10 years old he was too scared to protect his mother and as a result he witnessed something that changed his life forever. The man lives in between past and present. The memories of the day when the tragedy happened keep coming back to him. Sometimes they are so distorted that it’s impossible to tell what is real and what is a product of his imagination. In these visions he plays a psychopathic game with his past self, recollecting step by step the following events and details. Facing his own demons is a way to set himself free and discover who he really is. Was his psychopathic personality determined by the events from his childhood or are those events only the projection of his sick mind? Is he a victim or a villain? Or, maybe both at the same time? Play takes the audience on a dangerous roller‑coaster ride through the world without any rules. Gradually discovering the protagonist’s story is a journey inside his memory, which hides, apart from his dark tendencies, the images of modern world flirted through television and pop cultural references. All of this creates a visual and musical montage presenting the complexity of the protagonist’s mind, which hides inside a small child, a murderer and a dreamer. PAULINA BUKOWSKA 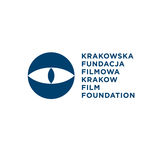