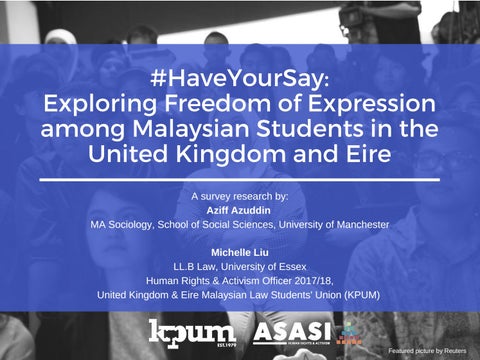 This survey is devised to investigate the attitudes of Malaysian students across the UK and Eire towards freedom of expression. Identifying the legal, social and political factors influencing the way in which Malaysian students express themselves will help to strengthen and improve ongoing activism and campaigns to empower, protect and uphold studentsâ&#x20AC;&#x2122; right to freedom of expression.

Survey was carried out between January - March 2018

The remainder of the survey employed a 5-point Likert Response Scale, Guttman scaling and dichotomous questions to measure the respondentsâ&#x20AC;&#x2122; attitudes towards freedom of expression and their understanding of Article 10

By subject of study

Key Findings: Right to of Freedom of Expression “Individuals and groups have the right to express their opinions.”

Key Findings:Â Scope of Freedom of Expression "Individuals and groups have the right to express their opinions, even if I disagree with them."

"It is important for individuals and groups to have their right to express opinions because it has positive implications." 70%

"The law should restrict views that are critical to my own views and beliefs." 24%

"Sensitive subjects should be discussed." 80%

A large majority of respondents are comfortable discussing sensitive topics and agree that such topics should be discussed.

Key Findings: Sensitive Subjects Where do you feel is appropriate to discuss sensitive subjects?** Private conversations

Who should be allowed to participate in discussing sensitive subjects?** Experts

Although a large majority of respondents are comfortable discussing sensitive topics and agree that such topics should be discussed, results display reservation about the manner in which such topics should be discussed. Respondents prefer to discuss sensitive topics in private or formal settings over open discourse. Respondents prefer to allow the participation of experts and the general public to participate in discussing sensitive subjects. Responses are distributed rather evenly across the other options, except for a marked lack of preference for politicians. * Newspaper, television, radio and online portals

Key findings:Â Â Preferences "Are you interested in the political, social and economic developments back home?" No 17%

Key Findings:Â MediumsÂ of Expression "Which among these mediums do you feel comfortable expressing your views?"** Online portals and opinion submissions to news outlets

Generally, respondents are more comfortable with expressing themselves privately than in public. Even then, face-to-face conversations are highly preferred in comparison to other mediums of communication such as messaging platforms. In public, respondents are comfortable with social media as well as formal channels of communication such as public forums and news sites. Respondents generally do not prefer to participate in demonstrations and protests to express themselves. *i.e. Whatsapp, Telegram, WeChat, etc

Key Findings: Considerations "When I express my views publicly, I consider the response or reaction from ________."** Friends/ acquaintances

Respondents tend give more consideration to the responses of those immediate to them (i.e. friends, acquaintances, family and relatives).

Less consideration is given to NGOs, government and political parties.

What do you consider before you express your views publicly?** That my views might What my That my views affect my current That everything friends, family may and future chances on the Internet or and be used public forum is at employment or acquaintances against me recorded and sponsorship might think of likely permanent me.

That individuals That the or parties might public will use my views criticize or and manipulate troll me, my it to their personal life agendas. and opinions.

When expressing their views, respondents' considerations are fairly distributed across the options, but are mostly considered with their views being used to affect them in the future.

Key findings: Understanding Article 10 "I am familiar with my rights under the Federal Constitution of Malaysia." 40%

Key Findings:Â Understanding Article 10 "To my knowledge, the freedom of speech and expression under Article 10 extends to _________." Becoming a member of society and organisation Media and film

Speech and Communication All of the above

"I have done these before _____" Formed/joined a society, club, organisation or association

Organised/joined a peaceful demonstration or protest None of the above

These questions were asked to gauge the understanding of respondents towards their Article 10 rights. A comparison can be drawn from the two charts: Most respondents have indicated that they have formed/join a society, club, organisation or association before. However, the option 'becoming a member of society and organisation', in the left chart, is one to receive the least amount of responses. This may be indicative of respondents' lack of understanding towards their right to freedom of expression, in which joining societies is exercising one's freedom to associate. Participation in public rallies and demonstrations remain low among the respondents. This is not far off from the amount of responses received under the 'public rallies and demonstrations' option in the left chart. *Note: These are multiple choice (multiple answer) questions.

Key findings:Â Â Understanding Article 10 "I am aware that my right to freedom of expression under Article 10 has limitations." No 14%

Key Findings:Â Understanding Article 10 "I consider these topics to be outside the limits of my right to freedom of expression" Royal Institutions 105 responses

Government and its' policies 73 responses

None of the above 33 responses

A distinction must be drawn between 'sensitive subjects' and 'limits to freedom of expression'. The latter refers to the legal limits or restrictions to one's right to freedom of expression. What is deemed to be sensitive may not necessarily be a valid limitation. Sexuality, political parties and government policies do not fall squarely within the limits set out by Article 10 per se. Article 10 of the Federal Constitution allows the imposition of restriction on the freedom of expression on grounds of "security of the Federation, friendly relations with other countries, public order or morality and restrictions designed to protect the privileges of Parliament or of any Legislative Assembly or to provide against contempt of court, defamation, or incitement to any offence". With broadly implemented and discretionary laws in place, it is not surprising that most options received a considerable amount of responses. This may, however, indicate the lack of understanding towards Article 10 and its' legal limits.

*Note: This is a multiple choice (multiple answer) question.

Key findings:  Opinion on the Freedom of Expression “I believe that the current state of law gives me freedom to express myself without feeling fear.”

Recommendations Following the findings, we would like to propose a few recommendations that could be undertaken to better uphold and protect students' right to freedom of expression. Replication of the study. This project can provide a quantitative and methodological framework for future studies aimed at exploring the attitudes of freedom of expression, primarily among Malaysian students. While this project was limited by its duration and respondent scope, there is an opportunity for future studies to conduct this study with larger, diverse respondents over a longer period of time. Educate students on the freedom of expression. Key findings of the survey indicate that there is a lack of awareness between topics which are considered to be sensitive and those which constitute as valid limitations under Article 10 of the Federal Constitution. Given the broad implementation of discretionary laws regulating speech in Malaysia, it is not surprising that misconceptions about the scope and limit of free speech exists. More student groups should join in the effort to empower their fellow students through human rights education. Furthermore, it may also be useful for Malaysian students to discuss the limits of free speech - of what students should or should not do or say. 21

Recommendations Provide independent platforms for Malaysian students to discuss sensitive subjects. Following the survey results, respondents feel strongly that sensitive topics should be discussed. At present, there are plenty of student conferences and events held here in the UK to encourage discourse amongst Malaysian students. In recent years, there is more willingness to discuss controversial and sensitive subjects but they are often discussed in a manner which is politically correct or avoidant, thus unproductive. In order to combat against the culture of fear, there must be safe spaces for students to express themselves freely on sensitive matters without fear or intimidation. Establish a human rights complaints mechanism for Malaysian students in the UK. This may just help to reinstate the confidence of students in expressing themselves. There is currently no independent channel for students to make such reports. Documenting human rights violations is important for any victims to seek redress and ensure accountability on the part of authorities or any other entity to comply with international standards. It is also a matter of welfare of students - should any Malaysian student face intimidation, threats or danger for expressing themselves, there is a mechanism that works to protect the affected students. 22

Limitations There are several respondent variables which would be important in influencing the survey results: 53.2% were Law students; 70.7% were self-funded; 28.2% were sponsored, and bonded by scholarship.* The high respondents of Law students were due to the #HaveYourSay campaign being organised by KPUM that primarily serves Malaysian law graduates in the UK. This may influence responses to questions relating to Article 10 and attitudes towards freedom of expression as far its legal framework is concerned. Funding of studies may also affect the survey results. Individuals bonded by sponsorship/scholarship are legally bound by the terms and conditions of their contract; some which may affect their ability to express freely. While those who are self-funded have broader autonomy to freedom of expression. While this variable is a limitation to the survey results, it is also one of the key points that this survey intends to argue: that the funding status of a student has significance with their autonomy to express freely.

*Combined total percentage of both variables. 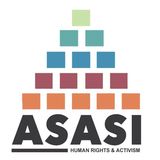 #HaveYourSay: Exploring Freedom of Expression among Malaysian Students in the UK & Eire

This is the summary report of the survey research on freedom of expression by KPUM and ASASI.

#HaveYourSay: Exploring Freedom of Expression among Malaysian Students in the UK & Eire

This is the summary report of the survey research on freedom of expression by KPUM and ASASI.