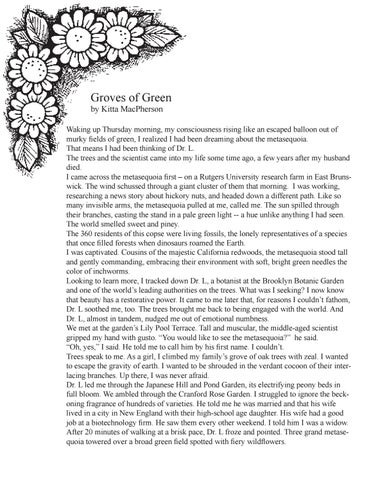 Groves of Green by Kitta MacPherson

Waking up Thursday morning, my consciousness rising like an escaped balloon out of murky fields of green, I realized I had been dreaming about the metasequoia. That means I had been thinking of Dr. L. The trees and the scientist came into my life some time ago, a few years after my husband died. I came across the metasequoia first – on a Rutgers University research farm in East Brunswick. The wind schussed through a giant cluster of them that morning. I was working, researching a news story about hickory nuts, and headed down a different path. Like so many invisible arms, the metasequoia pulled at me, called me. The sun spilled through their branches, casting the stand in a pale green light -- a hue unlike anything I had seen. The world smelled sweet and piney. The 360 residents of this copse were living fossils, the lonely representatives of a species that once filled forests when dinosaurs roamed the Earth. I was captivated. Cousins of the majestic California redwoods, the metasequoia stood tall and gently commanding, embracing their environment with soft, bright green needles the color of inchworms. Looking to learn more, I tracked down Dr. L, a botanist at the Brooklyn Botanic Garden and one of the world’s leading authorities on the trees. What was I seeking? I now know that beauty has a restorative power. It came to me later that, for reasons I couldn’t fathom, Dr. L soothed me, too. The trees brought me back to being engaged with the world. And Dr. L, almost in tandem, nudged me out of emotional numbness. We met at the garden’s Lily Pool Terrace. Tall and muscular, the middle-aged scientist gripped my hand with gusto. “You would like to see the metasequoia?” he said. “Oh, yes,” I said. He told me to call him by his first name. I couldn’t. Trees speak to me. As a girl, I climbed my family’s grove of oak trees with zeal. I wanted to escape the gravity of earth. I wanted to be shrouded in the verdant cocoon of their interlacing branches. Up there, I was never afraid. Dr. L led me through the Japanese Hill and Pond Garden, its electrifying peony beds in full bloom. We ambled through the Cranford Rose Garden. I struggled to ignore the beckoning fragrance of hundreds of varieties. He told me he was married and that his wife lived in a city in New England with their high-school age daughter. His wife had a good job at a biotechnology firm. He saw them every other weekend. I told him I was a widow. After 20 minutes of walking at a brisk pace, Dr. L froze and pointed. Three grand metasequoia towered over a broad green field spotted with fiery wildflowers. 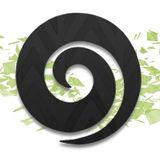 Koru Mag is an online literary and art magazine

Koru Mag is an online literary and art magazine