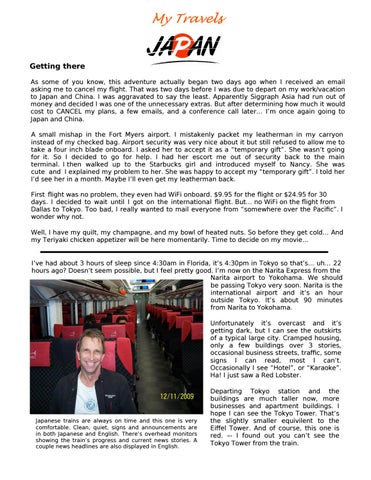 Getting there As some of you know, this adventure actually began two days ago when I received an email asking me to cancel my flight. That was two days before I was due to depart on my work/vacation to Japan and China. I was aggravated to say the least. Apparently Siggraph Asia had run out of money and decided I was one of the unnecessary extras. But after determining how much it would cost to CANCEL my plans, a few emails, and a conference call later… I’m once again going to Japan and China. A small mishap in the Fort Myers airport. I mistakenly packet my leatherman in my carryon instead of my checked bag. Airport security was very nice about it but still refused to allow me to take a four inch blade onboard. I asked her to accept it as a “temporary gift”. She wasn’t going for it. So I decided to go for help. I had her escort me out of security back to the main terminal. I then walked up to the Starbucks girl and introduced myself to Nancy. She was cute and I explained my problem to her. She was happy to accept my “temporary gift”. I told her I’d see her in a month. Maybe I’ll even get my leatherman back. First flight was no problem, they even had WiFi onboard. $9.95 for the flight or $24.95 for 30 days. I decided to wait until I got on the international flight. But… no WiFi on the flight from Dallas to Tokyo. Too bad, I really wanted to mail everyone from “somewhere over the Pacific”. I wonder why not. Well, I have my quilt, my champagne, and my bowl of heated nuts. So before they get cold… And my Teriyaki chicken appetizer will be here momentarily. Time to decide on my movie...

I’ve had about 3 hours of sleep since 4:30am in Florida, it’s 4:30pm in Tokyo so that’s… uh… 22 hours ago? Doesn’t seem possible, but I feel pretty good. I’m now on the Narita Express from the Narita airport to Yokohama. We should be passing Tokyo very soon. Narita is the international airport and it’s an hour outside Tokyo. It’s about 90 minutes from Narita to Yokohama. Unfortunately it’s overcast and it’s getting dark, but I can see the outskirts of a typical large city. Cramped housing, only a few buildings over 3 stories, occasional business streets, traffic, some signs I can read, most I can’t. Occasionally I see “Hotel”, or “Karaoke”. Ha! I just saw a Red Lobster.

Japanese trains are always on time and this one is very comfortable. Clean, quiet, signs and announcements are in both Japanese and English. There’s overhead monitors showing the train’s progress and current news stories. A couple news headlines are also displayed in English.

Departing Tokyo station and the buildings are much taller now, more businesses and apartment buildings. I hope I can see the Tokyo Tower. That’s the slightly smaller equivilent to the Eiffel Tower. And of course, this one is red. –- I found out you can’t see the Tokyo Tower from the train.

I had to change trains and that was another adventure. Luckily the signs are still in both languages so I found the name of the train line I want, but it has turnstiles and everyone seems to have passes. I only have the pass from my previous train ride. There’s an information window… I manage to stumble through the pronunciation of my next destination which he seems to understand and he takes my previous train ticket and lets me enter past the turnstiles. Cool, pretty easy. Down the stairs I find ANOTHER set of turnstiles. Now what? Okay, there’s a wall of ticket machines which of course I can’t read. There is English on the big map but I can’t find the name of the station I want. I know my ticket is supposed to cost 180yen from an email I received with instructions. So I watch a few people purchase tickets and I buy one I see for 190yen. Maybe it’s just how far you go. Now I’m stuck again. Most people have passes and the turnstiles are all automatic. I spot another information station. He understands where I want to go and says I have the wrong ticket. He takes my ticket that I just purchased and gives me my money back. That’s not a lot of help. I ask him what to do and he points to the turnstiles and says blue hand. Okay, there is a blue hand stencil on the turnstiles. I think I’m good. Nope. I touch the blue hand and the turnstile doors, that were open, now close in front of me. I see no place to put in money. It’s busy. Everyone is in a hurry, the information guy is talking to someone else. I wonder around and start asking people if they speak English, “agooga wacarimaska”… the one phrase I’d made certain to practice. Eventually I find a girl that speaks a little English. She points to the ticket machines. I try to explain that I’m an idiot and I don’t know how to work a simple ticket machine. She says follow her and a minute later I have my ticket. Once again, now what? The turnstiles seem to be setup to take credit card size tickets. I’m hesitant to put my raffle-size ticket in a slot it’s probably not designed for. Okay, one more time, I pantomime my confusion to a passing woman. It’s simple of course. The same credit card slot takes my ticket. Finally I’m on my way. The hotel is a five minute walk from the train station. And… it’s raining. I ask a man, as he exits the train station, “which way to the Navios Yokohama”. He invites me to walk with him and share his umbrella. Yeah! I’m in my hotel room, it’s 6:30pm (4:30am) for my internal clock). I’m hungry and tired.

Yokohama from my hotel window.

A day to explore Tokyo I really wanted to see the Tokyo Tower. The rain is over and it’s a nice day, a few clouds but mostly blue sky. On clear days you can even see Mt. Fuji from the tower (62 miles from Tokyo). It’s in the 50’s today. Somehow I’m comfortable in just a long sleeve shirt. Must be the excitement. After breakfast and checking my email… I have no email form Kaz, the chair of the Japanese network team. So, it’s a free day to do some exploring. I first met a couple from the US who are here for a micro biology convention, which happens to be in the same convention center. They were on their way to Tokyo for some sightseeing so we talked about tours, things to do, and genomics. I wished them well and headed to the Pacifico convention center.

At the convention center they were getting ready for some kind of Christmas event. I don’t know what, but there were Santas everywhere.

Yokohama, located on Tokyo Bay, south of Tokyo, was originally a fishing village. It’s now Japan’s largest incorporated city with 3.6 million people. Of course Tokyo is much larger, about 12 million, but I guess it’s not a single incorporated city. It’s more commonly listed as the Tokyo/Yokohama metropolitan area containing around 30 million people!

I’m off to Tokyo and another train station adventure. David, my friend from Indiana who didn’t make it on this trip, warned me about local trains. They sometimes have zero information in English. Eh, what’s the worst that could happen? I’ve got the train thing down, I stand around looking lost and confused and occasionally asking people if they speak English. Eventually I get my ticket and Yatta!, this train has English announcements. Thirty minutes later I’m in Tokyo. Btw, this time I have a train map. But even with a map, it’s not much better. I know I’m close to Tokyo Tower because I trust the girl at the information office who told me where to get off the train. Now I just need to know which direction to walk. I get lucky and see a non-Asian guy walking towards me on the sidewalk. Yes! He speaks English. Actually he’s British. He tells me to keep walking in the direction he came from.

Okay, walk, look for big red and white tower. Easy enough. Except five minutes later I’m at Tokyo Bay and no Tower. I ask a shop keeper who directs me back the same direction I’d just come! Walking...

Sure enough just two minutes later I see Tokyo Tower in the distance. Damn Brit! Japanese are much more helpful and trustworthy.

Appears to be just before the entrance to Tokyo Tower. The monks are chanting And performing some sort of service.

T O K Y O View of the city from Tokyo Tower… The last photo is looking towards Mt. Fuji but it’s too cloudy to see the mountain.

From the tower I could look down on the temple I walked through on my journey to Tokyo Tower.

While waiting for the elevator down you can enjoy a walk across the glass observation window IN THE FLOOR to get a view straight down 150 meters!

Back down on street level I said hello to a woman enjoying a coffee outside with her dogs.

I started looking for something to eat. Many restaurants have plastic food in the window showing the dishes they serve. It’s only somewhat helpful because I still don’t know what it is. Finally I found a little sushi bar. This is fantastic! I point to the tuna and the sushi chef sets me up. I need a little help understanding the powdered green stuff on the counter. It’s tea! And there’s a hot water dispenser right beside me.

The little conveyor “belt” in front of me is really cool, the itamae cuts various fish and puts them on the belt, anyone can take whatever they like as they roll past, or ask for something specific. When you’re done, they count your plates and charge you accordingly. I had 4 helpings of very very good sashimi and ten dollars later I’m content and on my way.

Back to the train station. I find a guy who doesn’t speak English but understands “Yokohama”. He doesn’t seem to know what ticket to purchase so he whips out his phone and looks up something. I put my money down for him and he buys my ticket for me. Then he says the a VERY important word. He points at Shinagawa station on the map and says… “Change”. He smiles, waves, and we’re both on our way. No problems changing trains in Shinagawa station, and soon I’m back home in Yokohama. I spent the next two hours on a shopping adventure to find Christmas cards in the mall. I won’t bore you with the difficulties of trying to follow the directions I received. But I finally figured out, when you go upstairs in a big department store, you find DIFFERENT stores! 7:30pm, I’m jet lagged. Unfortunately I’m still waking up around 3am. I’m going to bed.