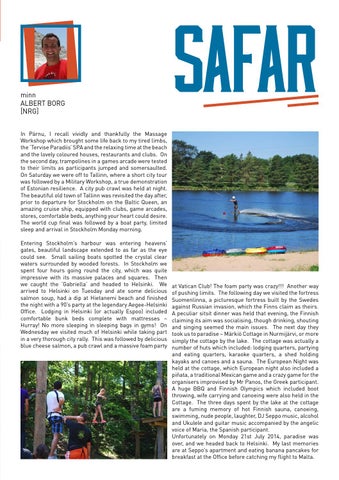 In Pärnu, I recall vividly and thankfully the Massage Workshop which brought some life back to my tired limbs, the ‘Tervise Paradiis’ SPA and the relaxing time at the beach and the lovely coloured houses, restaurants and clubs. On the second day, trampolines in a games arcade were tested to their limits as participants jumped and somersaulted. On Saturday we were off to Tallinn, where a short city tour was followed by a Military Workshop, a true demonstration of Estonian resilience. A city pub crawl was held at night. The beautiful old town of Tallinn was revisited the day after, prior to departure for Stockholm on the Baltic Queen, an amazing cruise ship, equipped with clubs, game arcades, stores, comfortable beds, anything your heart could desire. The world cup final was followed by a boat party, limited sleep and arrival in Stockholm Monday morning. Entering Stockholm’s harbour was entering heavens’ gates, beautiful landscape extended to as far as the eye could see. Small sailing boats spotted the crystal clear waters surrounded by wooded forests. In Stockholm we spent four hours going round the city, which was quite impressive with its massive palaces and squares. Then we caught the ‘Gabriella’ and headed to Helsinki. We arrived to Helsinki on Tuesday and ate some delicious salmon soup, had a dip at Hietanemi beach and finished the night with a 90’s party at the legendary Aegee-Helsinki Office. Lodging in Helsinki (or actually Espoo) included comfortable bunk beds complete with mattresses – Hurray! No more sleeping in sleeping bags in gyms! On Wednesday we visited much of Helsinki while taking part in a very thorough city rally. This was followed by delicious blue cheese salmon, a pub crawl and a massive foam party

at Vatican Club! The foam party was crazy!!! Another way of pushing limits. The following day we visited the fortress Suomenlinna, a picturesque fortress built by the Swedes against Russian invasion, which the Finns claim as theirs. A peculiar sitsit dinner was held that evening, the Finnish claiming its aim was socialising, though drinking, shouting and singing seemed the main issues. The next day they took us to paradise – Märkiö Cottage in Nurmijärvi, or more simply the cottage by the lake. The cottage was actually a number of huts which included: lodging quarters, partying and eating quarters, karaoke quarters, a shed holding kayaks and canoes and a sauna. The European Night was held at the cottage, which European night also included a piñata, a traditional Mexican game and a crazy game for the organisers improvised by Mr Panos, the Greek participant. A huge BBQ and Finnish Olympics which included boot throwing, wife carrying and canoeing were also held in the Cottage. The three days spent by the lake at the cottage are a fuming memory of hot Finnish sauna, canoeing, swimming, nude people, laughter, DJ Seppo music, alcohol and Ukulele and guitar music accompanied by the angelic voice of Maria, the Spanish participant. Unfortunately on Monday 21st July 2014, paradise was over, and we headed back to Helsinki. My last memories are at Seppo’s apartment and eating banana pancakes for breakfast at the Office before catching my flight to Malta.