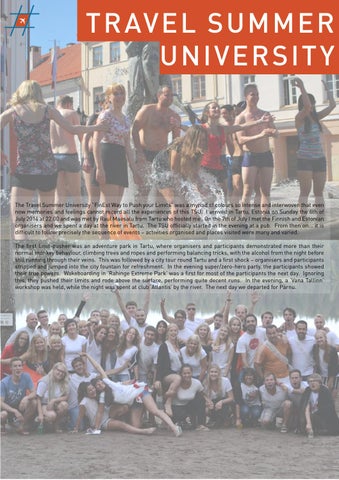 The Travel Summer University “FinEst Way to Push your Limits” was a myriad of colours so intense and interwoven that even now memories and feelings cannot record all the experiences of this TSU. I arrived in Tartu, Estonia on Sunday the 6th of July 2014 at 22.00 and was met by Raul Maesalu from Tartu who hosted me. On the 7th of July I met the Finnish and Estonian organisers and we spent a day at the river in Tartu. The TSU officially started in the evening at a pub. From then on... it is difficult to follow precisely the sequence of events – activities organised and places visited were many and varied. The first limit-pusher was an adventure park in Tartu, where organisers and participants demonstrated more than their normal monkey behaviour, climbing trees and ropes and performing balancing tricks, with the alcohol from the night before still running through their veins. This was followed by a city tour round Tartu and a first shock – organisers and participants stripped and jumped into the city fountain for refreshment. In the evening super/zero-hero party, the participants showed their true powers. Wakeboarding in ‘Rahinge Extreme Park’ was a first for most of the participants the next day. Ignoring this, they pushed their limits and rode above the surface, performing quite decent runs. In the evening, a ‘Vana Tallinn’ workshop was held, while the night was spent at club ‘Atlantis’ by the river. The next day we departed for Pärnu.