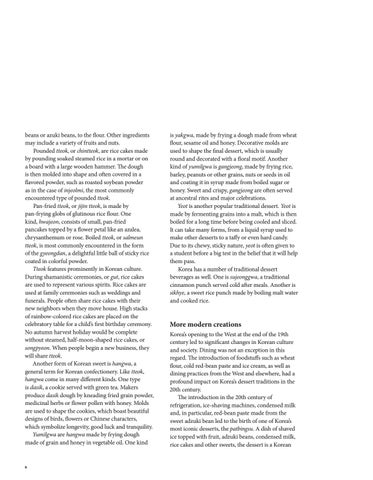 beans or azuki beans, to the flour. Other ingredients may include a variety of fruits and nuts. Pounded tteok, or chintteok, are rice cakes made by pounding soaked steamed rice in a mortar or on a board with a large wooden hammer. The dough is then molded into shape and often covered in a flavored powder, such as roasted soybean powder as in the case of injeolmi, the most commonly encountered type of pounded tteok. Pan-fried tteok, or jijin tteok, is made by pan-frying globs of glutinous rice flour. One kind, hwajeon, consists of small, pan-fried pancakes topped by a flower petal like an azalea, chrysanthemum or rose. Boiled tteok, or salmeun tteok, is most commonly encountered in the form of the gyeongdan, a delightful little ball of sticky rice coated in colorful powder. Tteok features prominently in Korean culture. During shamanistic ceremonies, or gut, rice cakes are used to represent various spirits. Rice cakes are used at family ceremonies such as weddings and funerals. People often share rice cakes with their new neighbors when they move house. High stacks of rainbow-colored rice cakes are placed on the celebratory table for a child’s first birthday ceremony. No autumn harvest holiday would be complete without steamed, half-moon-shaped rice cakes, or songpyeon. When people begin a new business, they will share tteok. Another form of Korean sweet is hangwa, a general term for Korean confectionery. Like tteok, hangwa come in many different kinds. One type is dasik, a cookie served with green tea. Makers produce dasik dough by kneading fried grain powder, medicinal herbs or flower pollen with honey. Molds are used to shape the cookies, which boast beautiful designs of birds, flowers or Chinese characters, which symbolize longevity, good luck and tranquility. Yumilgwa are hangwa made by frying dough made of grain and honey in vegetable oil. One kind

is yakgwa, made by frying a dough made from wheat flour, sesame oil and honey. Decorative molds are used to shape the final dessert, which is usually round and decorated with a floral motif. Another kind of yumilgwa is gangjeong, made by frying rice, barley, peanuts or other grains, nuts or seeds in oil and coating it in syrup made from boiled sugar or honey. Sweet and crispy, gangjeong are often served at ancestral rites and major celebrations. Yeot is another popular traditional dessert. Yeot is made by fermenting grains into a malt, which is then boiled for a long time before being cooled and sliced. It can take many forms, from a liquid syrup used to make other desserts to a taffy or even hard candy. Due to its chewy, sticky nature, yeot is often given to a student before a big test in the belief that it will help them pass. Korea has a number of traditional dessert beverages as well. One is sujeonggwa, a traditional cinnamon punch served cold after meals. Another is sikhye, a sweet rice punch made by boiling malt water and cooked rice.

More modern creations Korea’s opening to the West at the end of the 19th century led to significant changes in Korean culture and society. Dining was not an exception in this regard. The introduction of foodstuffs such as wheat flour, cold red-bean paste and ice cream, as well as dining practices from the West and elsewhere, had a profound impact on Korea’s dessert traditions in the 20th century. The introduction in the 20th century of refrigeration, ice-shaving machines, condensed milk and, in particular, red-bean paste made from the sweet adzuki bean led to the birth of one of Korea’s most iconic desserts, the patbingsu. A dish of shaved ice topped with fruit, adzuki beans, condensed milk, rice cakes and other sweets, the dessert is a Korean