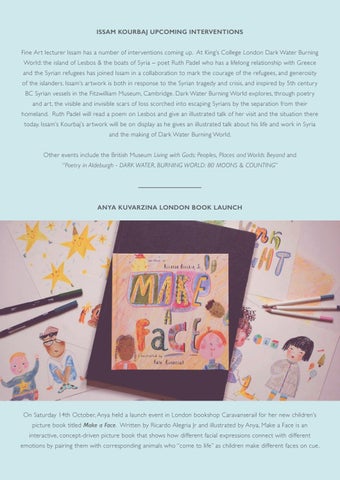 ISSAM KOURBAJ UPCOMING INTERVENTIONS Fine Ar t lecturer Issam has a number of interventions coming up. At King’s College London Dark Water Burning World: the island of Lesbos &amp; the boats of Syria – poet Ruth Padel who has a lifelong relationship with Greece and the Syrian refugees has joined Issam in a collaboration to mark the courage of the refugees, and generosity of the islanders. Issam’s ar twork is both in response to the Syrian tragedy and crisis, and inspired by 5th century BC Syrian vessels in the Fitzwilliam Museum, Cambridge. Dark Water Burning World explores, through poetry and ar t, the visible and invisible scars of loss scorched into escaping Syrians by the separation from their homeland. Ruth Padel will read a poem on Lesbos and give an illustrated talk of her visit and the situation there today. Issam’s Kourbaj’s ar twork will be on display as he gives an illustrated talk about his life and work in Syria and the making of Dark Water Burning World. Other events include the British Museum Living with Gods: Peoples, Places and Worlds Beyond and “Poetr y in Aldeburgh - DARK WATER, BURNING WORLD: 80 MOONS &amp; COUNTING”

On Saturday 14th October, Anya held a launch event in London bookshop Caravanserail for her new children’s picture book titled Make a Face. Written by Ricardo Alegria Jr and illustrated by Anya, Make a Face is an interactive, concept-driven picture book that shows how different facial expressions connect with different emotions by pairing them with corresponding animals who “come to life” as children make different faces on cue.