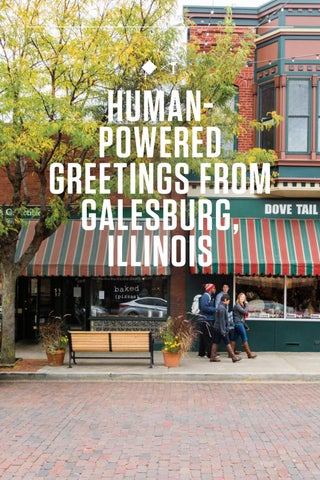 A FEW WONDERFUL THINGS ABOUT GALESBURG

1. IT RUNS ON COLLECTIVE INGENUITY. If you have a great idea, it’s easy to bring people together to bring it to life. Example: A Knox alumnus wanted to turn Seminary Street into a classic independent shopping district. Now it’s home to cafes, restaurants, a natural foods store, an antique mall—all locally owned.

2. PEOPLE MAKE GOOD FOOD HERE. Like the wood-fired pizza at Baked, the inside-out brownie at Q’s, the hot dogs at Coney Island, the 4 Napkin Burger at Chez Willy’s, the chile relleno at Acapulco (owned by a Knox alumna!), the organic cinnamon rolls at Uncle Billy’s. Making food is a way of making community.

3. PEOPLE MAKE ART HERE. At the Prairie Players Civic Theatre, or in the Knox-Rootabaga Jazz Festival, or at the Box, home to art exhibits and unclassifiable performances. Plus: The Galesburg Civic Art Center hosts exhibits by local artists. The Knox-Galesburg Symphony Orchestra— directed by a Knox music professor and featuring many Knox students—performs at the historic Orpheum Theatre.

4. PEOPLE HAVE IDEAS HERE. It feels a little like you’re standing in the middle of a particle accelerator, except the particles are ideas. Nearly the entire Knox community—students, faculty, and staff—lives within a few miles of campus. All of that translates into a sense of energy, excitement, cross-pollination.

5. IT’S DEEPLY ROOTED (ENVIRONMENTALLY). We live close to the land. Some of our neighbors are farmers. Some of our favorite things to do involve bikes and canoes and trails. Our own 700-acre Green Oaks Biological Field Station— one of the oldest prairie restoration sites in America—is 20 miles from town.

6. IT’S DEEPLY ROOTED (HISTORICALLY). Carl Sandburg (a plain-spoken, Pulitzer Prize-winning American poet) was born here. One of the Lincoln–Douglas debates—the country’s benchmark for political argument—was held here, at Old Main. Generations of immigrants have built lives here. If you know your past, you can build your future.

7. IT’S DEEPLY FAMILIAR (COMMERCIALLY). Galesburg is home to many national franchises (a purveyor of wings that are wild! an eight-screen cinema with stadium seating! a huge store selling stylishly practical goods, named for something you aim at!) that will be familiar to anyone who has lived in a relatively populated area of America.

8. YOU CAN MAKE A DIFFERENCE HERE. Our students contribute thousands of hours of service in Galesburg every year, through long-standing programs like the Knox Prairie Community Kitchen, our Day of Service, and the groundbreaking KnoxCorps program, which places current students and recent graduates in long-term positions with local and regional nonprofits.

9. YOU CAN BE A NEIGHBOR HERE. Our students perform with local theaters, tutor in local schools, become members of local faith communities, play in community bands.

10. YOU CAN MAKE A HOME HERE. Everyone matters. You come, you get involved—and suddenly you’re home.

3 FACT-BASED STATEMENTS ABOUT GALESBURG 1. GALESBURG IS A SMALL CITY. Galesburg (pop. 33,000) is close to the Illinois-Iowa border, full of enterprising, big-hearted people, founded alongside a great liberal arts college, surrounded by prairie and farmland.

3. GALESBURG IS (MODESTLY, QUIETLY) AT THE CENTER OF THINGS. We’re at the heart of a national rail network; there’s an Amtrak station a few blocks from campus; Chicago (home to many Knox alumni) is three hours away. And two regional airports are less than an hour away.

SLIGHTLY ESOTERIC NOTE ABOUT LIVING IN THIS EXACT PLACE The land around us is prairie or farmland. It’s fairly flat. No one lives high on a mountaintop or deep in a valley. At dusk the horizon is a long glowing line in every direction. There’s something deeply democratic about this. We all have power. We all have a voice. We all stand on equal ground, together.

WISH YOU WERE HERE! (WE REALLY DO.) 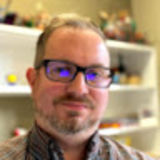