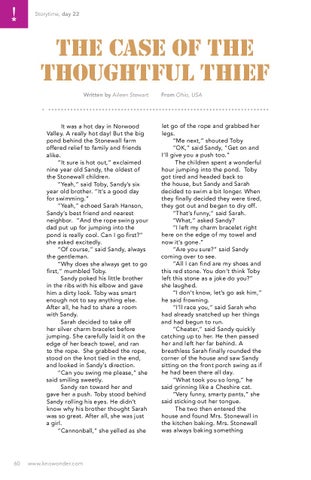 The Case of the Thoughtful Thief Written by Aileen Stewart

It was a hot day in Norwood Valley. A really hot day! But the big pond behind the Stonewall farm offered relief to family and friends alike. “It sure is hot out,” exclaimed nine year old Sandy, the oldest of the Stonewall children. “Yeah,” said Toby, Sandy’s six year old brother. “It’s a good day for swimming.” “Yeah,” echoed Sarah Hanson, Sandy’s best friend and nearest neighbor. “And the rope swing your dad put up for jumping into the pond is really cool. Can I go first?” she asked excitedly. “Of course,” said Sandy, always the gentleman. “Why does she always get to go first,” mumbled Toby. Sandy poked his little brother in the ribs with his elbow and gave him a dirty look. Toby was smart enough not to say anything else. After all, he had to share a room with Sandy. Sarah decided to take off her silver charm bracelet before jumping. She carefully laid it on the edge of her beach towel, and ran to the rope. She grabbed the rope, stood on the knot tied in the end, and looked in Sandy’s direction. “Can you swing me please,” she said smiling sweetly. Sandy ran toward her and gave her a push. Toby stood behind Sandy rolling his eyes. He didn’t know why his brother thought Sarah was so great. After all, she was just a girl. “Cannonball,” she yelled as she

let go of the rope and grabbed her legs. “Me next,” shouted Toby “OK,” said Sandy, “Get on and I’ll give you a push too.” The children spent a wonderful hour jumping into the pond. Toby got tired and headed back to the house, but Sandy and Sarah decided to swim a bit longer. When they finally decided they were tired, they got out and began to dry off. “That’s funny,” said Sarah. “What,” asked Sandy? “I left my charm bracelet right here on the edge of my towel and now it’s gone.” “Are you sure?” said Sandy coming over to see. “All I can find are my shoes and this red stone. You don’t think Toby left this stone as a joke do you?” she laughed. “I don’t know, let’s go ask him,” he said frowning. “I’ll race you,” said Sarah who had already snatched up her things and had begun to run. “Cheater,” said Sandy quickly catching up to her. He then passed her and left her far behind. A breathless Sarah finally rounded the corner of the house and saw Sandy sitting on the front porch swing as if he had been there all day. “What took you so long,” he said grinning like a Cheshire cat. “Very funny, smarty pants,” she said sticking out her tongue. The two then entered the house and found Mrs. Stonewall in the kitchen baking. Mrs. Stonewall was always baking something November issue of knowonder! magazine. This FREE magazine features a new story for every day of the month to help promote a love of reading...

November issue of knowonder! magazine. This FREE magazine features a new story for every day of the month to help promote a love of reading...