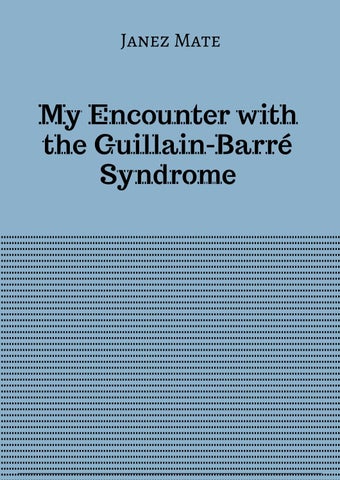 1. FOREWORD This book has been in the making for a year and a half. During the first six months the author directly experienced the Guillain-Barré syndrom, during his treatment and rehabilitation. During the next twelve months the rehabilitation process continued, and the last nine months of that period were also dedicated to writing. I travelled the path which many patients had travelled before me. Perhaps it is not a coincidece that this book saw the light of the day at the occasion of the hundredth anniversary of the first description of the Guillain-Barré syndrome. This book describes my experiences with the Guillain- Barré syndrom during the time of my hospitalisation at the Department of Neurology, and later during my rehabilitation at the University Rehabilitation Institute of the Republic of Slovenia – Soèa. Especially during the second period I learned about experiences of fifteen other patients suffering from the same disease. The literature on Guillain- Barré syndrome in the Slovenian language is very limited, and it is rather difficult to get information about the onset of the disease, treatment, recovery and – most importantly – about dealing with the consequences of the disease. I have not been able to find any material giving experiences of the patients during the time of disease, and rehabilitation. As I would have appreciated especially additional information describing the direct experiences of patients, I decided to write about the journey I made, acompanied by GBS. I hope it will be a guide, or at least a kind of a travel ratio for people who are, or will be travelling the same journey.

3. GENERAL COMMENTS ON THE TEXT The text below does not represent an expert opinion, except when the sources of authors are specifically quoted, or is giving any professional evaluation from the field of medicine and rehabilitation. Abbreviations used in the text:

4. THE FIRST ENCOUNTER WITH GBS It starts suddenly, like a bolt from the blue. You go to bed healthy, and wake up paralysed. Simple description of the disease would be as follows: you contract a mild bacterial or viral infection, and your body starts producing antibodies which attack not only bacteria or viruses, but also nerve fibre sheaths. The sheaths deteriorate until the treatment stops the disease. In severe cases, not only the sheaths are affected, but also nerve fibres, and it happened in Jani's case as well. During the first EMG test his leg and arm muscles showed practically no response.

5. TREATMENT AT THE NEUROLOGICAL DIVISION The disease comes quickly, but it takes time to deal with its consequences. And it is especially true for neurological diseases, including GBS. The treatment started immediately upon Jani’s arrival to hospital. He was administered infusions of immunoglobulins (blood donors’ healthy antibodies). As the improvement was too slow, treatment with plasmapheresis was introduced after two weeks (patient’s blood is withdrawn, plasma removed from it, and then blood cells are returned into patient’s bloodstream). Both procedures are practically painless. The first procedure required insertion of a catheter into a vain on his arm through which medications were administered, and the second insertion of two catheters into veins of his groin to allow blood purification. Catheters were removed from his groin a couple of days after the end of the therapy. During his entire stay at the Neuro he had catheters inserted in his veins. Every few days, when the flow through catheters became obstructed, they replaced them, using veins on both arms and legs. In the beginning it was among the most painful experiences, along with almost daily blood draws. Moving was, as a rule, also very painful, e.g. at washing in the morning.

the time, during the day, but also during the long nights. It is best if a patient practices mind games with a topic close to him – it can be a hobby, or anything at all.

7. REHABILITATION AT SOČA The first two days after admittance to Soča are dedicated to adaptation to the new environment. The doctor examines the patient, and prepares a rehabilitation programme. The second and the third day a work therapist and a physical therapist test mobility, strength, and functional capacities of the patient. The third, or the fourth day therapy sessions start. At Soča the peculiarity of the new environment is immediately noticeable: everything is oriented towards improvement of functional capacity, and activity. A bed stops being the centre of all the activity – the focus is on the wheelchair, all kinds of exercises, and daily activities. The entire staff constantly encourages patients to move, and to be as independent as possible. 8. THERAPIES Physical therapy, Balance board – video games, Electro-stimulations, Hydrotherapy , Work therapy, Magnetic therapy, Psychological and social therapy, Group therapy, Therapies with doctors, therapists, nurses, technicians and other staff, Autotherapy. 9. REHABILITATION AT HOME Release from a hospital system, and return home has a very positive impact on a patient. Yet the downside is that the patient is suddenly has to rely almost entirely on himself, and his family. When realised from Soča, Jani was able to walk independently with a walker for a couple of hundred metres, so in the first month after his release from Soča he spent mostly in his wheel chair. Three months into his return home he still relied on help from his family for almost all daily tasks: undressing, dressing, preparation of food, hygiene, transport to physical therapy into the local health centre, etc.

10. THE SECOND PART OF REHABILITATION AT SOČA In February 2016 he returned to Soča for three weeks and continued his rehabilitation. In his opinion the rehabilitation went by too quickly, and should last at least five times longer, or as long as necessary to enable the patient for normal life and work; Jani was positive that after the rehabilitation and another month or so of staying at home he would return to work. He had the impression that he made more progress during a week at Soča than during three weeks spent at home, and he attributed it to the professional staff, daily exercising in a pool which was unavailable at home, and special exercise equipment at Soča.

After being definitely released from Soča Jani continued therapies at home. Gradually he became able to use more and more tools he had prepared. He still exercises two to four hours a day (different therapies). He dedicated a part of the morning and a part of the afternoon to therapies, mostly it depends on the weather, and when the help with exercises is available. When the daily tasks he is able to perform by himself are taken into consideration as well, the time dedicated to exercising is even longer. He dedicated some work therapy time to amusing surfing the Net, e.g. looking for suitable fitness tools and weights. Usually he ordered a piece through internet, to be delivered to his home address, and usually he wasn't able to use the bought tool for at least a month. He bought a small 10-kg dumbbell (several disks, total weight 10 kg), but not even after twelve months he was able to use it. After 15 months he was able to perform some exercises using only the handle (approx. 2 kg) ...

12. CONCLUSION – RECOVERY CHART The eighteen month of Jani's encounter with GBS, and his recovery. From practically total immobility rehabilitation brought him to partial recovery. A part of the journey is behind him, but there is still a long way ahead of him – yet he is more and more optimistic about his future. The road he will have to travel is long, but he is already familiar with it, and the important thing is that Jani is able to spend longer and longer parts of his day independently, and he is still successful in his efforts to remedy consequences of the disease. RECOVERY CHART 13. ENCLOSURES - Test charts from Soča: Chronological walking test, Berg balance scale, SHAP, Muscle test, Measurement of upper extremity movement, Literature available on the web.

14. ACKNOWLEDGMENT 15. ACCOMPANYING WORDS Matej, Jani's son, Miran, Jani's brother, Jože Levstek, Stane Hafnar. ... It is difficult to imagine the procedures and therapies a patient must go through in order to master again the activities healthy people consider normal. Just as it is difficult to imagine the willpower, persistence and positive thinking an individual is capable of. I believe that the path to recovery is easier if you know somebody who had already travelled it, or is walking the path at the same time as you are. This book will most certainly prove to be of great assistance, and inspiration to many people – and not only to GBS patients. And last, but not the least – the person facing such a trial begins to appreciate life even more, and every day adds meaning

to life. ... JoĹže Levstek ... The book is non-technical, but contains the professional knowledge accessible to laypersons; it is enriched with impressions, perceptions and personal observations. It is an accurate chronicle, and as such even a visually tangible diary, combining a personal or even a literary story with a manual for general use. It is a lament and a complaint, which ultimately gives comfort. ... Stane Hafnar 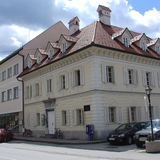 My Encounter with the Guillain-Barre Syndrome

Janez Mate - My Encounter with the Guillain-Barre Syndrome

My Encounter with the Guillain-Barre Syndrome

Janez Mate - My Encounter with the Guillain-Barre Syndrome