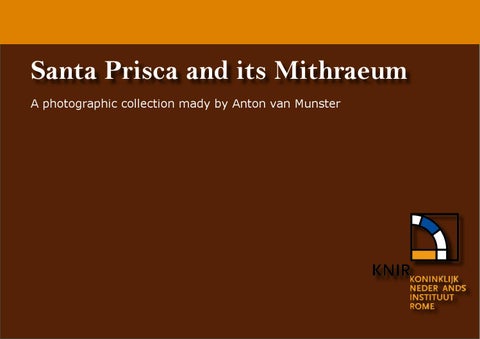 This catalogue contains the photographic collection of Santa Prisca and its underlying Mythraeum, made by Anton van Munster.

Anton van Munster and Santa Prisca Anton van Munster was a well-known Dutch cinematographer, especially known for the work he created with director Bert Haanstra. As with so many other Dutch artists in past and present, the pathway of Van Munster led to Rome. He studied at the “Centro Sperimentale di Cinematografia” in Rome and for some time he actually lived at the Dutch Institute. Santa Prisca is a medieval church standing on the Aventine hill in Rome. The church is not well-known among tourists, although it is a very interesting place. Due to excavations by Augustinian Fathers in 1934 a Mithraeum was found below the church. During the 1950’s these excavations were continued under Dutch supervision, with the permission of several Italian professors and institutions.[1] Van Munster, then still a student at the Centro Sperimentale di Cinematografia, made pictures of the excavations in the winter of 1960-1961. The library of the Royal Dutch Institute in Rome has a complete set of copies of those pictures. They are one of a kind and give insight in the excavations back then, as the mithraeum is now unfortunately only rarely open to the public. If you wish to use the pictures, please contact the library. We would like to thank the family of Anton van Munster for their permission to use this documentation. [1] Professor Dr. Salvatore Aurigemma, Professor Dr. Pietro Romanelli, Professor Dr. Renato Bartocini, Professor r. Giulio Iacopi, Direzione Generale delle Antichità e Belle Arti and the Consiglio Superiore dell Antichità e Belle Arti. See Vermaseren M.J. and C.C. van Essen, The excavations in the mithraeum of the church of santa prisca in Rome (Leiden: E.J. Brill, 1965), IX.

2. Facade of the church

4. Back of the church with surrounding houses

5. Back of the church

6. Buttresses in the outer wall

15. Wall with label and pipe

16. Gallery in the Santa Prisca

24. The altar in the lower church

25. The altar in the lower church

28. Part of the original floor level

29. View into lower parts of the church

30. Part of the original wall

31. Space in the lower church

33. Part of the lower church

57. Four tablets with engravings or brickstamps

69. Display of reliefs and pottery

71. Sculpture of a headless body

75. Display of sculptures and pottery

99. Pipes under the floor level

The library has a photographic collection of the Santa Prisca excavations, made by Anton van Munster in 1960. Santa Prisca is a medieval church with a Mithraeum underneath, standing on the Aventine hill in Rome. The pictures are one of a kind and provide an insight in the excavations, as the mithraeum is now unfortunately only rarely open to the public. If you wish to use the photographs, please contact the library. 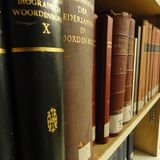