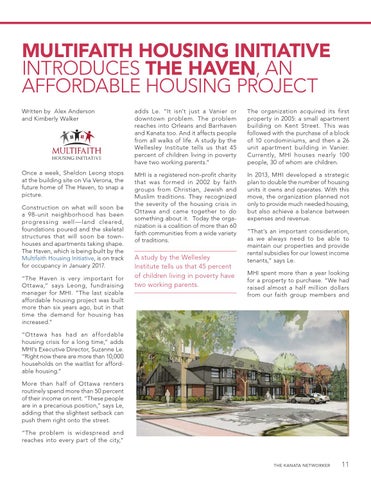 adds Le. “It isn’t just a Vanier or downtown problem. The problem reaches into Orleans and Barrhaven and Kanata too. And it affects people from all walks of life. A study by the Wellesley Institute tells us that 45 percent of children living in poverty have two working parents.”

The organization acquired its first property in 2005: a small apartment building on Kent Street. This was followed with the purchase of a block of 10 condominiums, and then a 26 unit apartment building in Vanier. Currently, MHI houses nearly 100 people, 30 of whom are children.

Once a week, Sheldon Leong stops at the building site on Via Verona, the future home of The Haven, to snap a picture.

MHI is a registered non-profit charity that was formed in 2002 by faith groups from Christian, Jewish and Muslim traditions. They recognized the severity of the housing crisis in Ottawa and came together to do something about it. Today the organization is a coalition of more than 60 faith communities from a wide variety of traditions.

In 2013, MHI developed a strategic plan to double the number of housing units it owns and operates. With this move, the organization planned not only to provide much needed housing, but also achieve a balance between expenses and revenue.

Construction on what will soon be a 98-unit neighborhood has been progressing well— land cleared, foundations poured and the skeletal structures that will soon be townhouses and apartments taking shape. The Haven, which is being built by the Multifaith Housing Initiative, is on track for occupancy in January 2017. “The Haven is very important for Ottawa,” says Leong, fundraising manager for MHI. ”The last sizable affordable housing project was built more than six years ago, but in that time the demand for housing has increased.”

A study by the Wellesley Institute tells us that 45 percent of children living in poverty have two working parents.

“That’s an important consideration, as we always need to be able to maintain our properties and provide rental subsidies for our lowest income tenants,” says Le. MHI spent more than a year looking for a property to purchase. “We had raised almost a half million dollars from our faith group members and

“Ot tawa has had an af fordable housing crisis for a long time,” adds MHI’s Executive Director, Suzanne Le. “Right now there are more than 10,000 households on the waitlist for affordable housing.” More than half of Ottawa renters routinely spend more than 50 percent of their income on rent. “These people are in a precarious position,” says Le, adding that the slightest setback can push them right onto the street. “The problem is widespread and reaches into every part of the city,” 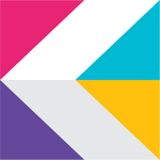 The Kanata Networker is an electronic publication which highlights news from the Kanata business community. Here you may browse and view cur...

The Kanata Networker is an electronic publication which highlights news from the Kanata business community. Here you may browse and view cur...