The little Mermaid by H.C.Andersen and Ellen 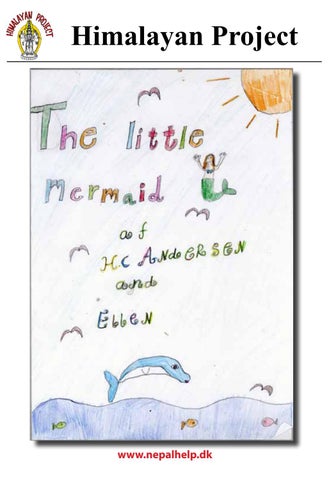 The Little Mermaid is a fairytale of the famous Danish storyteller H.C. Andersen. My name is Ellen and I am Papa Kurtâ&amp;#x20AC;&amp;#x2122;s daughterâ&amp;#x20AC;&amp;#x2122;s daughter. I am ten years old and I am in class 4 and I would like to tell you this story because it is so sad, exciting and good. You may not know about the ocean so I will tell you about it. In the ocean, the water tastes very strong with salt. There are many animals in the ocean. There are many fish of different colors and sizes. There are also clams, starfish, sea horses, crabs and turtles. There are also mammals like dolphins. But then there is also the Sea People.

The Sea People are half human and half fish. The upper body is like a human and the lower body is like a fish. Not with legs but with a tail fin so that they can swim in the ocean and they can breathe in the water. Once upon a time there was a Sea Man and a Sea Grandmother and the Sea Manâ&amp;#x20AC;&amp;#x2122;s six mermaid daughters at the bottom of the ocean. The Sea Man and the Sea Grandmother were sitting in a mussel shell talking about the fact that the Sea Manâ&amp;#x20AC;&amp;#x2122;s youngest daughter was soon fifteen years old. Outside of a pink sea house, the mermaids played ball. And all the fish and the crabs and the sea horses and the turtles swam around in the great ocean like the birds flying in the sky. The youngest daughter was the most beautiful of all, and she had the most beautiful singing voice in the ocean. However, she was not allowed to come to the surface of the water, until she became fifteen years old. But she would be very soon. The other daughters were fifteen years old and had been to the surface. The youngest daughter was very excited when she could get to the surface and see what it looked like. 4

Inside the sea house the windows were opened and the fish swam in. Some of the sea people also swam in, and then they danced. The house was so nice. There were flowers that grew out of the walls, and the windows were made of wood from a ship. All the sea people were so fond of dancing inside the house. Outside the house there was a small garden with blue and burning red plants. There were also golden fruits on the plants and some cute little flowers. There was a special fish that was bigger than all the other fish and it was green with black stripes and it had no teeth. All the sea creatures liked the fish because it was so sweet.

One day, the youngest mermaid became fifteen years old. She swam straight up to the surface, because she could not wait to see what it looked like up there. Just as her head was above the surface she saw a terrible storm. She saw a ship rocking in rough sea. There were only two people on the ship. It was a shipâ&amp;#x20AC;&amp;#x2122;s mate and a young man. The others were probably hiding under deck. The Little Mermaid suddenly saw the Young Man hanging from the ship. She got really scared, and he was just about to fall into the ocean.

The Young Man could not hold on to the ship anymore. He had only two fingers to hold on with. Now one. And now none. He fell off the ship and landed very hard on the water, and he fainted. The Little Mermaid saw him falling into the water and she dived under the water to save him. She grabbed him and hurried up to the surface. She swam to a beach and laid him on the sand. She looked deep into his eyes and realized she was in love with him. Suddenly the Little Mermaid could hear someone coming down some stairs. There were two men and a young lady. The Little Mermaid hurried into the water, so they did not see her. When the Young Man woke up, he saw the Young Lady and thought that it was she, who had saved him. Immediately he decided that he should marry her. The Young Man sat up and said to the Young Lady: ”You saved me”. She replied: ”What do you mean?” And he said again: ”You saved me”. The Little Mermaid said with a low voice: ”Oh no, it was not her, it was me”. The Little Mermaid swam home and told everything that had happened. 10

The Little Mermaid was washed up on the beach just in front of the Young Manâ&amp;#x20AC;&amp;#x2122;s big house. She saw that she had no tail and that was strange. She tried to rise up to stand on her legs, but it did hurt as if there were some knives and glass slices that pushed her up in her feet. It did hurt so badly. She remembered that it was not the Young Lady who had saved the Young Man and that it was the Little Mermaid herself who did. She had no tail and no voice, and she was no mermaid anymore. She could not even talk to the Young Man to tell him. But she did all that for true love.

Next day there was a wedding and the Young Man and the Young Lady were to be married. There was a big nice wedding cake, and there was singing and everyone looked so attracted at the couple. Now it was time for the priest to say: ”Young Man, will you marry the Young Lady”. He answered: ”Yes”. Then the priest said to the Young Lady: ”Will you marry the Young Man”. She answered: ”Yes”. The priest says that now they were allowed to kiss, and then they gave each other a sweet little kiss. Everyone was happy. She turned and threw a bouquet of flowers and it was one of her girlfriends who got the bouquet. Then beautiful music came and everyone had delicious food and a piece of cake. But the Little Mermaid just stood by the wall and cried. She was so unhappy that they were now married, because she was in love with the Young Man, and she knew that it was too late, and she would die and change into foam on the ocean.

Then it was time for dancing in the hall and everyone went to dance. The Little Mermaid still cried but she went in to dance. Everybody stood in a circle and looked at the Little Mermaid dancing. They thought it looked very beautiful and elegant. She was dancing absolutely amazingly. She turned around and she jumped from side to side, lifting one leg and holding a perfect balance, and she moved her arms so quietly and beautifully. Everyone was touched. For no one could dance like her. Everybody was just amazed and looked at her. The Little Mermaid felt that it was hurting so terribly, like she was dancing on broken glass. But she did it anyway, because she felt so unhappy and her heart was broken.

But now she remembered, that the Sea Witch had also told her, that the only way to be a mermaid again, was that she should kill the Young Man, because she failed to marry him. At night she found a knife, and she went to the newly mariedâ&amp;#x20AC;&amp;#x2122;s room. She took the knife and prepared to kill the Young Man, but then she could not do it. She just could not. She dropped the knife on the floor and began to cry so unbelievably much. Now she realized she had to be foam on the ocean.

When the sisters of the Little Mermaid heard that their sisterâ&amp;#x20AC;&amp;#x2122;s love affair had gone wrong, they swam down to the Sea Witch at the bottom of the ocean and asked if there was nothing they could do, so the Little Mermaid should not become foam on the sea. The Sea Witch said, that they should cut off all their hair and give it to her. Then she would not turn the Little Mermaid into foam but into an Air Spirit instead. Although they were so sad to lose their beautiful long hair, they did it because they loved their little sister so much.

At midnight the Little Mermaid went down to the beach and while she was crying she walked into the water. Slowly she was dissolved into foam, but out of the foam an Air Spirit rose up against the sky, where other air spirits awaited her. The sisters lay in the water and looked at the transformation, and when they saw their sister flying up into the sky as a spirit, they looked sweetly and smiled at her. They realized, that giving all their hair to the Sea Witch was very good, since the Little Mermaid would otherwise have become foam on the sea forever. This is how the story ended up well.

Ellen is Papa Kurt’s granddaughter. She is 10 years old and she is in Class 4 in a school in Danmark. She loves the fairy tale about ”The Little Mermaid” of Hans Christian Andersen, who wrote it 200 years ago.

She wishes Nepali students to learn about this story, because it is so sad but also tells about true love. ”I hope you will like my story and my drawing - have a good time”.

The little Mermaid by H.C.Andersen and Ellen

10 years old Ellen in class four in Danmark made this story for class four students in Nepal, because this story is so sad and almost unimaginable for children in Nepal.