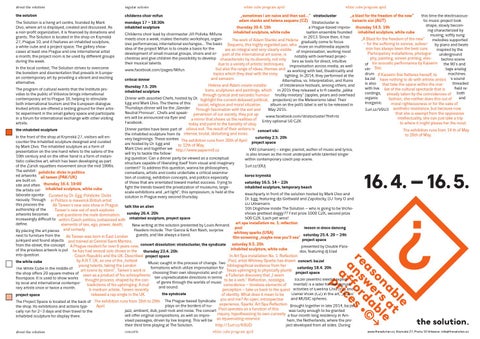 The Solution is a living art centre, founded by Mark Divo, where art is displayed, created and discussed. As a non-profit organization, it is financed by donations and grants. The Solution is located in the shop on Krymská 27, Prague 10, and it features an inhabited sculpture, a white cube and a project space. The gallery showcases at least one Prague and one international artist a month, the project room is be used by different groups during the week. In the local context, The Solution strives to overcome the boredom and disorientation that prevails in European contemporary art by providing a vibrant and exciting alternative. The program of cultural events that the Institute provides to the public of Vršovice brings international contemporary art to Prague 10, helping to stimulate both international tourism and the European dialogue. Invited artists are offered a testing ground for their artistic experiment in the small gallery space and participate in a forum for international exchange with other visiting artists. the inhabited sculpture

„a blast for the freedom of the new“ kaiserin sisi (AUT)

this time the electroacoustic music project took mondays 17 – 18:30h shape, slowly becominhabited sculpture a Prague-based improv- thursday 14.5. 19h thursday 30.4. 19h ing characterized by isation ensemble founded inhabited sculpture, white cube inhabited sculpture, white cube Childerns choir lead by choirmaster Jiří Polívka. Mifune musing, softly sung in 2013. Since then, it has meets once a week, makes thematic workshops, organ„A Blast for the freedom of the new“ melodies supported  The work of Adam Stanko and Helena gradually come to focus izes performances, international exchanges... The basic Sequens, this highly regarded pair, who – for the suffering to survive, subverby piano and beats more on multimedia aspects idea of the project Mifun is to create a basis for the sion has always been the best cure. inspired by the are an integral and very-clearly visible of improvisation, working most development of small musical groups, choirs and or- part of the international art scene, is Participatory installations, photograunderground notably with overhead projecchestras and give children the possibility to develop characteristic by its diversity, not only phy, painting, screen printing, electechno scene tors as tools for direct, intuitive their musical talents. of tro-acoustic performance by Kaiserin the 90’s and due to a variety of artistic techniques, improvisation across media, as well vin- Sisi. tage analog but also the range of ideas, themes and as working with text, theatricality and www.facebook.com/pages/Mifun drum If Kaiserin Sisi flatteres herself, to machines. topics which they deal with the irony lighting. In 2014, they performed at the ba:zel and sarcasm.  critical dinner have nothing to do with artistic antics ‘s sound Alternativa, vs. Interpretation, and Ruins is also threaded that take the space within the marof Intolerance festivals, among others, and Helena and Adam create installathursday 7.5. 20h with live ket of the cultural spectacle that is field retions, sculptures and paintings, which in 2015 they released a lo-fi casette „jabka inhabited sculpture cordings, already taken by the coincidences of both through cynical and sarcastic humour hrušky meotary“ (apples, pears and overhead organic and Dinner with assorted Chefs, hosted by Dr. highlight the current debased political, projectors) on the Meteorismo label. Their fashion, she neither does this out of inorganic.  Egg and Mark Divo. The theme of this moral righteousness or for the sake of album on the polí5 label is set to be released in social, religious and moral situation. Thursdays dinner will be the „Gender Through fascination with the evil and 1url.cz/V0U3 aesthetic resistance, but because now May 2015. Neutral Pronoun”. Chefs and speak- perversion of our society, they put up that she is exempt from the oppressive www.facebook.com/stratocluster?fref=ts ers will be announced via flyer and a mirror that shows us the realities of intellectuality, she can just take a trip Entry optional 50 CZK Facebook. to where it might please her the most. today and point to the banality of ubiquitous evil. Th e result of their actions is Dinner parties have been part of The exhibition runs from 14 th of May concert viki the inhabited sculpture from its intense, brutal, disturbing and ironic. to 26th of May. saturday 2.5. 20h very beginnings. These soirées The exhibition runs from 30th of April project space are hosted by Dr. Egg and to 12th of May. Mark Divo and together we http://www.papermill.cz VIKI (chanson) − singer, pianist, author of music and lyrics, will try to tackle the followis also known as the most underpaid while talented singer ing question: Can a dinner party be viewed as a conceptual within contemporary czech pop scene.   structure capable of liberating itself from visual and imaginary 1url.cz/j0Uj content? To address this question, wanna be philosophers, comedians, artists and cooks undertake a critical examinakorso krymská tion of cooking, exhibition concepts, and politics especially of those that are orientated toward market success. Trying to saturday 16.5. 14 − 22h fight the trends toward the privatization of museums, largeinhabited sculpture, temporary beach scale exhibitions and „art light“, this symposium, is held at the Beachparty in front of the solution hosted by Mark Divo and solution in Prague every second thursday. Dr. Egg, featuring djs Gottwald and Zapotocky, DJ Tony O and

In the front of the shop at Krymská 27, visitors will encounter the inhabited sculpture designed and curated by Mark Divo. The inhabited sculpture as a form of presentation on the one hand refers to the salons of the 19th century and on the other hand is a form of instantistic collective art, which has been developing as part of the Zürich squatters movement since the mid 1990s. The exhibit- polidicks: dicks in politics ed artworks ali tareen (PAK/UK) are built on site and often thursday 16.4. 19:00 the artists col- inhabited sculpture, white cube laborate sponta- Curated by Dr. Egg, Polidicks: Dicks neously. Through in Politics is maverick British artist DJ Ultramarin. this process the Ali Tareen’s new solo show in Prague. talk like an alien 16h Dogshow inside The Solution – who is going to be Vrchoauthorship of the Tareen’s new set of work explores sunday 26.4. 20h vhices prettiest doggy?? First prize 1000 CZK, second prize artworks becomes and questions the male domination 500 CZK. Each pet wins! increasingly difficult to within Czech politics, juxtaposed with inhabited sculpture, project space art spa installation no. 1: reflection define. elements of sex, ego, power, death, New writing at the solution presented by Louis Armand. pool lesson in disco dancing Readers include: Thor Garcia & Ken Nash, surprise By placing the art pieces and comedy. whitney sparks (USA) guests, and like always a band.  saturday 25.4. 20 – 24h next to furniture from the Ali Tareen was born in East London film screening „maybe now you‘ll sea“ project space junkyard and found objects and trained at Central Saint Martins. saturday 9.5. 20h concert dissolution: stratocluster, the syndicate  from the street, the concept A Prague resident for over 6 years now, presented by Double Parainhabited sculpture, white cube of the priceless artwork is put he has had several solo shows in the thursday 23.4. 20h dox, featuring dj Elad into question. Czech Republic and the UK. Described project space In Art Spa installation No. 1: Reflection by A.R.T. UK, as one of the „hottest Pool, artist Whitney Sparks has drawn concert: ba:zel the white cube Music caught in the process of change. Two young talents, taking the London bibliographical evidence from her formations which utilize improvisation for saturday 18.4. 20h The White Cube in the middle of art-scene by storm”, Tareen’s work is Texas upbringing to physically plumb project space the shop offers 20 square metres of seen as a product of his schizophrenic choosing their own idiosyncratic and of- a Fullerian discovery that „I seem ten unpredicatable directions in terms floorspace. It is used to show works ba:zel a:zel (exentric elektro experithought process, shaped by the conto be a verb.“ Reflection, nostalgia, of genre through the worlds of music by local and international contempomental) is a label for wanderlust tradictions of his upbringing. A mulcoincidence – timeless elements of and sound.  rary artists once or twice a month. ti-medium artiste, Tareen recently perception – take us back to the quest activities of Ewelina Chiu (PL) and the syndicate Daniel Vlcek (CZ) in the art, „music” released a rap single in the UK. of identity. What does it mean to be project space and MUSIC spheres.  you and me? An open, introspective The Project Space is located at the back of The exhibition runs from 16th to 29th The Prague-based Syndicate experience, Sparks‘ Art Spa Refl ection plays on the borders of nuBrought ought together in late 2014, ba:zel April. the shop. Its exhibitions and actions typiPool operates as a function of this jazz, ambient, dub, post-rock and noise. Th e concert was lucky enough to be granted cally run for 2–3 days and then travel to the inquiry, hypothesizing its own curiosity a four month long residency in Arnwill off er original compositions, as well as improinhabited sculpture for display there. vised passages, driven by live looping. This will be as rejuvenating reservoir. hem, the Netherlands, where the protheir third time playing at The Solution.

ject developed from all sides. During 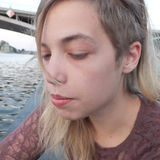