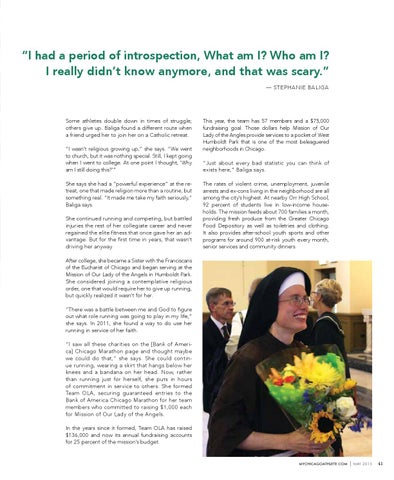 “I had a period of introspection, What am I? Who am I? I really didn’t know anymore, and that was scary.” — Stephanie Baliga

Some athletes double down in times of struggle; others give up. Baliga found a different route when a friend urged her to join her on a Catholic retreat. “I wasn’t religious growing up,” she says. “We went to church, but it was nothing special. Still, I kept going when I went to college. At one point I thought, ‘Why am I still doing this?’” She says she had a “powerful experience” at the retreat, one that made religion more than a routine, but something real. “It made me take my faith seriously,” Baliga says. She continued running and competing, but battled injuries the rest of her collegiate career and never regained the elite fitness that once gave her an advantage. But for the first time in years, that wasn’t driving her anyway.

This year, the team has 57 members and a $75,000 fundraising goal. Those dollars help Mission of Our Lady of the Angles provide services to a pocket of West Humboldt Park that is one of the most beleaguered neighborhoods in Chicago. “Just about every bad statistic you can think of exists here,” Baliga says. The rates of violent crime, unemployment, juvenile arrests and ex-cons living in the neighborhood are all among the city’s highest. At nearby Orr High School, 92 percent of students live in low-income households. The mission feeds about 700 families a month, providing fresh produce from the Greater Chicago Food Depository as well as toiletries and clothing. It also provides after-school youth sports and other programs for around 900 at-risk youth every month, senior services and community dinners.

After college, she became a Sister with the Franciscans of the Eucharist of Chicago and began serving at the Mission of Our Lady of the Angels in Humboldt Park. She considered joining a contemplative religious order, one that would require her to give up running, but quickly realized it wasn’t for her. “There was a battle between me and God to figure out what role running was going to play in my life,” she says. In 2011, she found a way to do use her running in service of her faith. “I saw all these charities on the [Bank of America] Chicago Marathon page and thought maybe we could do that,” she says. She could continue running, wearing a skirt that hangs below her knees and a bandana on her head. Now, rather than running just for herself, she puts in hours of commitment in service to others. She formed Team OLA, securing guaranteed entries to the Bank of America Chicago Marathon for her team members who committed to raising $1,000 each for Mission of Our Lady of the Angels. In the years since it formed, Team OLA has raised $136,000 and now its annual fundraising accounts for 25 percent of the mission’s budget.