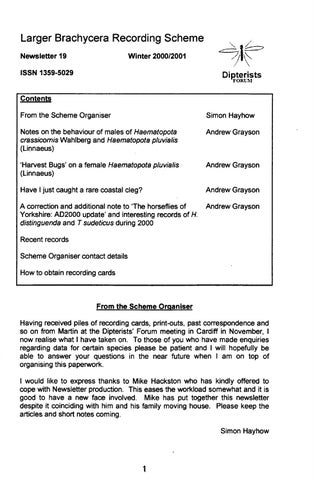 Contents From the Scheme Organiser

Have I just caught a rare coastal cleg?

A correction and additional note to &#39;The horseflies of Yorkshire: AD2000 update&#39; and interesting records of H. distinguenda and T sudeticus during 2000

From the Scheme Organiser Having received piles of recording cards, print-outs, past correspondence and so on from Martin at the Dipterists&#39; Forum meeting in Cardiff in November, I now realise what I have taken on. To those of you who have made enquiries regarding data for certain species please be patient and I will hopefully be able to answer your questions in the near future when I am on top of organising this paperwork. I would like to express thanks to Mike Hackston who has kindly offered to cope with Newsletter production. This eases the workload somewhat and it is good to have a new face involved. Mike has put together this newsletter despite it coinciding with him and his family moving house. Please keep the articles and short notes coming. Simon Hayhow

Notes on the behaviour of males of Haematopota crassicornis Wahlberg and Haematopota pluvialis (Linnaeus) Andrew Grayson, 56 Piercy End, Kirkbymoorside, York, North Yorkshire, Y062 6DF Haematopota crassicomis and H. plwialis often occur together, and are both frequent and generally distributed throughout Great Britain, with H. pluvialis being overall much the more common species. There is a noticeable difference in the sites used for resting, congregating, basking or perching (hereafter referred to as resting places) of males of these two species. H. plwialis males, for at least part of the day, rest on grass-heads and near the leaf tips of grasses, whereas males of H. crassicomis rest on solid structures and tree trunks. Individual males will occasionally, or frequently, fly skywards for a few seconds, before returning to, or close to, the same resting place.

In localities where H. crassicomis occurs, a single male or group of males usually more than ten in number, are often conspicuous due to their resting places being at, or close to, the tops of solid structures which cross, or are in the close proximity of ditches, streams and rivers. The materials of these resting places are relatively unimportant, and include wooden surfaces such as fence posts, fence rails, gates and bridge rails, brick and stone surfaces such as bridges and walls, and metal surfaces such as bridge rails, cattle feeders and troughs. What the resting places have in common is that they are solid, i.e. not prone to movement by wind, adjacent to running water and are in relatively open and sunny positions. Favoured resting places are used by successive generations of H. crassicomis males. They will also rest on solid natural surfaces, particularly tree stumps, if they are at least a couple of metres high; birch (Betula species) are favoured if in a sunny sheltered position. Almost invariably, H. crassicomis males rest high at their chosen resting places, either at the top, or close to the top, and this is tied to their habits. Males periodically leave the resting place to fly upwards and often sideways for a few seconds, and groups of males my &#39;dance&#39; in the sky, above the resting place. This activity must be assumed to be connected in at least some way with the courtship of females, as indeed, resting places and the area of sky immediately above them, may simply be places for males to intercept, or attract females, or for females to go to find a mate. Male H. crassicomis will also leave their resting places if disturbed, but are often reluctant to do so. After flight, a male will usually return to the resting place, but not usually to exactly the position whence it previously flew off.

H. pluvialis females are commonly encountered in the field, yet males are infrequently found, and extensive sweeping and searching of sites where H. pluvialis females occur will rarely produce any males. As with H. crassicomis males, those of H. pluvialis, when located, also occur as either a single male, or group of males of usually no more than ten individuals. Favoured resting places for H. pluvialis males are areas of tall grasses in relatively open positions, a few metres from water bodies. These resting places are no more than a few metres across, and the same areas are used by successive generations of males. Within the resting places, H. pluvialis males rest on the floppy grass heads of tall grasses, or near the leaf tips, and make regular flights, either just above the grass heads or slowly between grasses, possibly searching for, or trying to intercept females. Within a H. pluvialis resting place at Ashberry Pasture, N.E. Yorkshire, I once swept a copulating pair of H. pluvialis from amongst tall grasses. I have observed a group of several Haematopota &#39;dancing&#39; in the sky at Mersea Island, North Essex, (Grayson, 1997); when two of these flies were captured, they proved to be a male and female H. pluvialis

I thought that it was rather ironic that a female Haematopota pluvialis that tried to take a blood-meal from me at Fen Bog, N.E. Yorks. 44/85-97-, on the 19th July 1999 was itself being drained of some blood by a pair of mites or ticks commonly called &#39;Harvest Bugs&#39;. When examined under the microscope, the mites could be seen with their mouthparts embedded between the sternite plates of the abdomen. lt is not actually unusual to find these mites on various types of insects, particularly at places such as Fen Bog where they abound.

22.11.2000 Have I just caught a rare coastal cleg? The ventral stripe: a useful field character for separating females of the three rare Haematopota species from those of H. crassicornis Wahlberg and H. pluvialis (Linnaeus). Andrew Grayson

When surveying Haematopota in coastal regions, particularly those in southern Britain, have a look at the underside of any females that you capture; if an apparent darker ventral median stripe is present, then you have almost certainly caught one of the three rare coastal species. All five recognised British Haematopota occur in coastal regions, but females of the common and very variable H. pluvialis are nearly always the ones encountered at, or near, the British coast. The overall darker species H. crassicomis is generally not found right on the coastline, but occurs on levels very nearby in some regions. When in the field, I find that the presence of a darker ventral stripe in female H. bigoti Gobert, H. grandis Meigen and H. subcylindrica Pandelh3, and absence of any such stripe in female H. crassicornis and H. pluvialis is a very useful field character for initially recognising the three rarer species from the commoner two. lt is worthy of note however, that whilst this apparent darker ventral stripe is noticeable when you have a live female in natural light conditions, it is generally far less noticeable with a dried specimen under artificial light, and may not be apparent at all with some specimens, especially if the specimen has become &#39;greasy&#39; or if the angle of light is incorrect. In other words, the darker ventral stripe is a good character for use in the field, but of limited use when studying dead, dried specimens.

A correction and additional note to The Horseflies of Yorkshire: A. D. 2000 update, and interesting Yorkshire records of Hybomitra distinguenda (Verrall) and Tabanus sudeticus Zeller during 2000 Andrew Grayson

The Horseflies of Yorkshire: AD. 2000 update (Bulletin of the Dipterists Forum no. 50) contained a typing error in the species account for Hybomitra montana (Meigen) which needs correcting. The last sentence should read &quot;The most recent record from any of the other (Pennine) sites is from 1955, but this is due, in the main, to lack of recording&quot;, not &quot;1995&quot;. Also I know the previous sentence reads &quot;Pennine sties&quot;, but I am sure everyone will realise this should have read &quot;Pennine sites&quot;. If however I see any of my fellow dipterists taking an unusual interest in a pig sty in the Pennines, then I will realise why. One of the previously unauthenticated Yorkshire horsefly records was of Hybomitra bimaculata (Macquart) from &#39;Winestead 1954&#39;. Winestead is located 10 km. from the Yorkshire coast, and 50 km. from the nearest place in Yorkshire whence H. bimaculata has otherwise been recorded. This record was interesting, not in the least because if the identification was incorrect, then it could refer to a coastal species. On 2.12.2000, I paid a visit to Doncaster Museum, and in the collection housed there was a female H. bimaculata with a label reading WINESTEAD 1954&#39; on the upper side and &#39;Tabanus bisignatus (Jaen,) (a synonym of H. bimaculata) female Det D.H. Smith&#39; on the underside. Don Smith (pers. comm.) did not take the specimen, as he has never collected at Winestead, but, whilst he was living in the Hull area, several people handed specimens to him for identification and this appears to be one of these specimens. The important point is that another loose end has been tied up - the H. bimaculata record from Winestead 1954 is authentic. lt also shows the value of putting data labels on specimens. How frustrating it is to look through old, and sometimes not so old, collections, and find specimens of scarce and rare species either without data, or with data codes that are meaningless without their associated note books or sheets of paper, that are all too often lost forever. A couple of new probable breeding sites of Hybomitra distinguenda were discovered during 2000. A male was found by the author on a gravel road alongside a stream in Cockerdale, Oldstead N.E. Yorks., 44/533807, on 13.7.2000. lt had been either run over by a vehicle or stood on by a horse or a human, and despite being alive, it was partially crushed and attached by its gut to a piece of gravel on the 路road. Roy Crossley caught another male that was resting on vegetation at Hollin Hill Bogs, N.E. Yorks., 44/672737, on 2.6.2000 and this is the first record of H. distinguenda from the Howardian Hills. On 4.8.2000, I observed a female Tabanus sudeticus flying around a group of young black and brown bulls in a valley bottom meadow close to Cober Hill, Cloughton, N.E. Yorks., 54/009948, before it landed on, and bit, a black bull on the foot. The bull was initially irritated by the bite, but then ignored the Tabanus sudeticus, and seemed more irritated by the hoards of annoying smaller flies that constantly pester such cattle during hot summer days. The significance of the sighting at Cober Hill, is that it proves that T. sudeticus ranges widely in the North York Moors area, from this valley near the coast to at least 30 miles inland. 22.1.2000 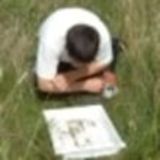