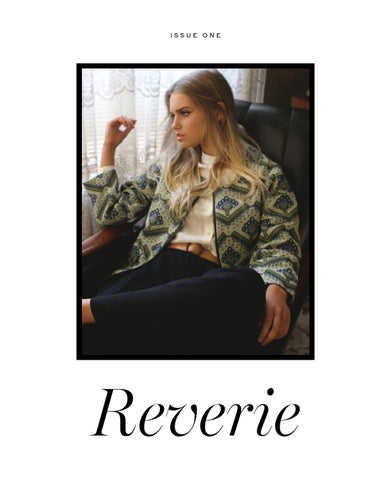 A WORLD OF HER OWN

Days fall into weeks, as she chases her wandering thoughts.

TOP BY ROSEBUD; SHIRT, STYLIST’S OWN

TOP BY ROSEBUD; SHIRT, STYLIST’S OWN

The world around her shifts in and out of focus.

The Barcelona native talks design, Melbourne and how a love of learning makes anything possible.

It’s 8am and I’m rushing to a café on Gertrude Street in Fitzroy, Melbourne. On the way, I’m having an internal, rambling debate. Wondering why I keep pursuing creative projects outside of full-time work, and asking myself if all this extracurricular activity really is worth it. Then I meet Maria Montes. And just like that - I have my answer.

fashion designer friend in Barcelona for Maria to discover the exciting world of textiles. For the next three years Maria focused on textile design, with a little help from Google.

“There was a lot of questioning myself, am I doing this right? Why am I doing this? But the answers never come the next day. It’s a process you need to go through.”

Maria exudes energy in every which way. You spot it in her hazel, green eyes; in her cheeky smile and the way she wears her navy shirt littered with pink flamingos. She well and truly fits into Fitzroy’s creative scene – minus the ego.

It paid off. Zara ordered 12,000 scarves in her design and her reputation in this field was cemented. Now, she works with a handful of independent fashion designers in Melbourne to help bring their collections to life.

A huge part of that process has been spending time with nature. She says her approach to life - and her work - has been heavily shaped by her new home in Australia. When I ask her about Melbourne, it’s obvious that the love for this city is overwhelming.

It’s early in the morning, but I instantly feel awake as she bounds from one topic to the next. As soon as I hit record, I come to a sudden conclusion – Maria is a poster girl for all female creatives.

“Before it was just overwhelming because you see your designs in over 20 countries around the world and you think wow that’s pretty awesome. But now the relationship with the designer is closer and in most of the cases I oversee most of the process. They have a strong idea behind the collection so in terms of creativity, it’s much more interesting.”

From Barcelona to Melbourne, from graphic design to textiles and a sudden turn into calligraphy, Maria’s life has always been about exploration – and going with her gut. All it took was one phone call from her

But all of this success hasn’t come without her challenges, especially when working from home.

“Australia has made me who am I today because I don’t have the support like I did in Barcelona. I think I am more confident thanks to the experience of being here.” As I collect my things to run out the door, I ask Maria about the one piece of advice she lives by. “I stole this from a friend of mine many years ago. He always said to me: ‘The best is yet to come.’” With an attitude like that, there’s no doubt that Maria has a bountiful future ahead.

“A collection of singular and poetic beauty.” HAMISH BOWLES, VOGUE

Icon, actress, heartthrob; Charlotte Rampling has long captured our interest beyond the film set. Her first autobiography “Qui je suis” French for “Who I Am”, exposes a new side to Rampling like never revealed before. “Qui je suis” Published in French by Grasset

EAT What started as a ‘hole-in-the-wall’ has become the place to be in the wee hours of Sunday morning. Lune Croissanterie combines world-class techniques, patience and the highest quality ingredients to create a consistently delicious croissant. With lines stretching around the corner, you’ll want to get in early.

â&amp;#x20AC;&amp;#x153;Daydreaming is where I think the most laterally. The world around me falls silent, I listen for inspiration. Just a few moments to visualise the story. But with motivation the best daydreams become reality.â&amp;#x20AC;?