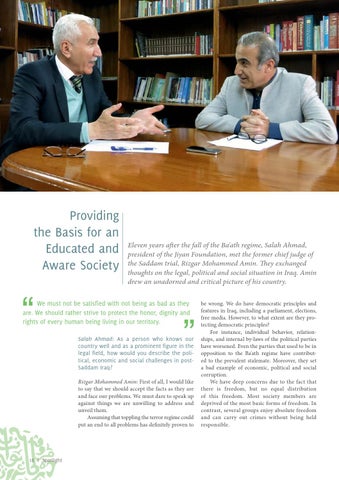 Providing the Basis for an Educated and Aware Society

Eleven years after the fall of the Ba'ath regime, Salah Ahmad, president of the Jiyan Foundation, met the former chief judge of the Saddam trial, Rizgar Mohammed Amin. They exchanged thoughts on the legal, political and social situation in Iraq. Amin drew an unadorned and critical picture of his country.

We must not be satisďŹ ed with not being as bad as they are. We should rather strive to protect the honor, dignity and rights of every human being living in our territory. Salah Ahmad: As a person who knows our country well and as a prominent ďŹ gure in the legal ďŹ eld, how would you describe the political, economic and social challenges in postSaddam Iraq? Rizgar Mohammed Amin: First of all, I would like to say that we should accept the facts as they are and face our problems. We must dare to speak up against things we are unwilling to address and unveil them. Assuming that toppling the terror regime could put an end to all problems has definitely proven to

be wrong. We do have democratic principles and features in Iraq, including a parliament, elections, free media. However, to what extent are they protecting democratic principles? For instance, individual behavior, relationships, and internal by-laws of the political parties have worsened. Even the parties that used to be in opposition to the Ba'ath regime have contributed to the prevalent stalemate. Moreover, they set a bad example of economic, political and social corruption. We have deep concerns due to the fact that there is freedom, but no equal distribution of this freedom. Most society members are deprived of the most basic forms of freedom. In contrast, several groups enjoy absolute freedom and can carry out crimes without being held responsible.