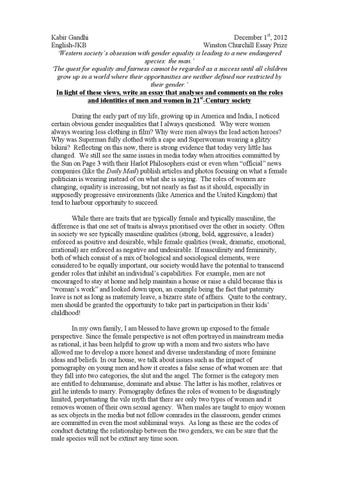 Kabir Gandhi December 1st, 2012 English-JKB Winston Churchill Essay Prize ‘Western society’s obsession with gender equality is leading to a new endangered species: the man.’ ‘The quest for equality and fairness cannot be regarded as a success until all children grow up in a world where their opportunities are neither defined nor restricted by their gender.’ In light of these views, write an essay that analyses and comments on the roles and identities of men and women in 21st-Century society During the early part of my life, growing up in America and India, I noticed certain obvious gender inequalities that I always questioned. Why were women always wearing less clothing in film? Why were men always the lead action heroes? Why was Superman fully clothed with a cape and Superwoman wearing a glitzy bikini? Reflecting on this now, there is strong evidence that today very little has changed. We still see the same issues in media today when atrocities committed by the Sun on Page 3 with their Harlot Philosophers exist or even when “official” news companies (like the Daily Mail) publish articles and photos focusing on what a female politician is wearing instead of on what she is saying. The roles of women are changing, equality is increasing, but not nearly as fast as it should, especially in supposedly progressive environments (like America and the United Kingdom) that tend to harbour opportunity to succeed. While there are traits that are typically female and typically masculine, the difference is that one set of traits is always prioritised over the other in society. Often in society we see typically masculine qualities (strong, bold, aggressive, a leader) enforced as positive and desirable, while female qualities (weak, dramatic, emotional, irrational) are enforced as negative and undesirable. If masculinity and femininity, both of which consist of a mix of biological and sociological elements, were considered to be equally important, our society would have the potential to transcend gender roles that inhibit an individual’s capabilities. For example, men are not encouraged to stay at home and help maintain a house or raise a child because this is “woman’s work” and looked down upon, an example being the fact that paternity leave is not as long as maternity leave, a bizarre state of affairs. Quite to the contrary, men should be granted the opportunity to take part in participation in their kids’ childhood! In my own family, I am blessed to have grown up exposed to the female perspective. Since the female perspective is not often portrayed in mainstream media as rational, it has been helpful to grow up with a mom and two sisters who have allowed me to develop a more honest and diverse understanding of more feminine ideas and beliefs. In our house, we talk about issues such as the impact of pornography on young men and how it creates a false sense of what women are: that they fall into two categories, the slut and the angel. The former is the category men are entitled to dehumanise, dominate and abuse. The latter is his mother, relatives or girl he intends to marry. Pornography defines the roles of women to be disgustingly limited, perpetuating the vile myth that there are only two types of women and it removes women of their own sexual agency. When males are taught to enjoy women as sex objects in the media but not fellow comrades in the classroom, gender crimes are committed in even the most subliminal ways. As long as these are the codes of conduct dictating the relationship between the two genders, we can be sure that the male species will not be extinct any time soon.

The first prompt of this essay is a very bold one. It might rightfully point to examples in which feminist movements are making it more politically correct to hire women over men, such as when former presidential candidate Mitt Romney claimed to create “binders of women” to solicit women for his cabinet in Massachusetts. That said, however many cases like this may come up we are still far away from ‘men being an endangered species’. In an article by CNN journalist by Michael Kimmel, titled The Mythical ‘war on men’, Kimmel responded to a claim by anti-feminist Suzanne Venker who argued that women are “their own worst enemy”, and that the rise of women has caused the “end of men” resulting in men wilting into angry resentful bachelorhood because women are demanding so much from men. He responded saying this far from the truth and without women being involved, “all hell would break loose”. Women need to be equally present in the workplace as it is their birthright to have equal opportunities. In fact, the very assumption that gender equality would require the male species to be extinct is both ludicrous and problematic because it suggests that women can never achieve “equality” if the male species is still on earth. To a certain extent, I find the second prompt to be somewhat flawed. Women should not pursue “equality” since both anatomically and biologically the two genders are different. “Fairness” is more appropriate terminology because it suggests instead that the quest be for women to receive the same pay for the same job, longer maternity leave without losing their jobs and the ability to leave the office without penalty if they are suffering from menstruation pain. Instead of saying that, "equality" is when women conform to male standards, as we saw in the 80s and 90s, it should be when the workplace does not penalise a woman for bodily functions, and instead institutionalizes them in a way that allows her to perform her work while not feeling she has to pretend she is not a woman. We do not need to be focusing on equality and do need to be focusing on fairness. In India, for example, women are encouraged to get married for financial security while men are encouraged to pursue a job and pursue their talents for financial security. Clearly, we are far from the target of fairness that would benefit society by including the perspective of 50% of the population. To conclude, I think the fight for fairness is not at the peril of men. Society must acknowledge gender differences without punishing them. Improving opportunities for women would not be problematic for men and would enhance ideas in the classroom, workplace and home. Humans have typically evolved only when multiple perspectives push ideas forward and this will not be possible as long as the quest for gender bias elimination is stifled.