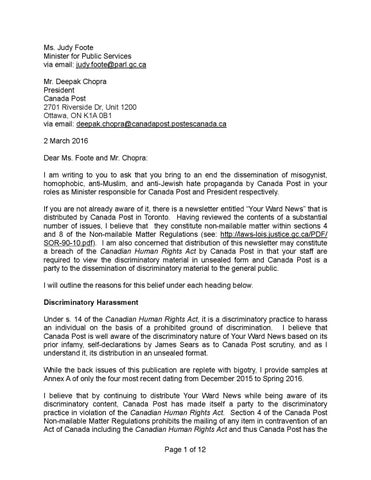 I am writing to you to ask that you bring to an end the dissemination of misogynist, homophobic, anti-Muslim, and anti-Jewish hate propaganda by Canada Post in your roles as Minister responsible for Canada Post and President respectively.

If you are not already aware of it, there is a newsletter entitled â&amp;#x20AC;&amp;#x153;Your Ward Newsâ&amp;#x20AC;? that is distributed by Canada Post in Toronto. Having reviewed the contents of a substantial number of issues, I believe that they constitute non-mailable matter within sections 4 and 8 of the Non-mailable Matter Regulations (see: http://laws-lois.justice.gc.ca/PDF/ SOR-90-10.pdf). I am also concerned that distribution of this newsletter may constitute a breach of the Canadian Human Rights Act by Canada Post in that your staff are required to view the discriminatory material in unsealed form and Canada Post is a party to the dissemination of discriminatory material to the general public.

! I will outline the reasons for this belief under each heading below. ! Discriminatory Harassment !

Under s. 14 of the Canadian Human Rights Act, it is a discriminatory practice to harass an individual on the basis of a prohibited ground of discrimination. I believe that Canada Post is well aware of the discriminatory nature of Your Ward News based on its prior infamy, self-declarations by James Sears as to Canada Post scrutiny, and as I understand it, its distribution in an unsealed format.

While the back issues of this publication are replete with bigotry, I provide samples at Annex A of only the four most recent dating from December 2015 to Spring 2016.

means to bring an immediate end to its participation in the discriminatory practice. I should note as well that Mr. Sears does not restrict his bigotry to Your Ward News and attach at Annex C a summary of his social media posts up to and including counselling sexual assault against women.

If Canada Post persists in distributing Your Ward News as it does currently, I will pursue the matter accordingly.

Page 1 of the November 2015 issue of Your Ward News alleges directly and through innuendo that Warren Kinsella and Lisa Kinsella are engaged in a conspiracy with others to cover up paedophilia. As someone with extensive experience in libel litigation, I believe this crosses the line in terms of the offence of defamatory libel under s. 298 of the Criminal Code and is yet another example of why Your Ward News constitutes NonMailable Matter as a violation of an Act of Canada. See https://issuu.com/ yourwardnews/docs/ywn_nov_2015

! Possible Violation of Article 15.09 of Queen’s Regulations and Orders !

This article of the Queen’s Regulations and Orders provides that only former members of the Canadian Armed Forces who completed 10-years of honourable service may subsequently make use of their former rank title. (See Annex B)

At page 15 of the April and page 1 of the May and October 2015 issues that Canada Post delivered Mr. Sears signs his name as:

The shortness of his career as a military medical officer is outlined in the Ontario College of Physicians and Surgeons decision to strip him of his licence to practice medicine - see Ontario (College of Physicians and Surgeons of Ontario) v. Sears, 1993 ONCPSD 9 (CanLII), http://canlii.ca/t/glgkv. I am concerned, therefore, that it is unlikely that Mr. Sears completed 10-years of honourable service that would permit him to legally use his former rank title and this would constitute Non-Mailable Matter as a violation of s. 4 of the Regulations as a violation of a regulation of Canada.

Page 15 of the February 2016 issue of Your Ward News contains an image depicting Jesus about to engage in sexual intercourse with a woman holding a Crucifix (see https://issuu.com/yourwardnews/docs/ywn_feb_2016). I suggest that it should be fairly self-evident that this contravenes s. 8(2) of the Non-Mailable Matter Regulations concerning nudity and sexual activity as it is not distributed in an opaque envelope with the words â&amp;#x20AC;&amp;#x153;adult materialâ&amp;#x20AC;? or similar warning.

In closing, I reiterate my request that Canada Post immediately cease the dissemination of the kind of noxious hate propaganda found in Your Ward News.

While the back issues of this publication are replete with bigotry, I provide samples below of only the four most recent dating from December 2015 to ‘Spring’ 2016.

- page 3 openly acknowledges the paper advocates Nazism - refers to opponents of the newsletter as “faggy” - page 8 describes a named individual as a “boy-hungry faggot” - pages 10 and 11 engage in Holocaust denial and general anti-Jewish bigotry - page 19 repeatedly refers to individuals as “faggots”, “cripples”, “spazzes”, Mr. Sears states that if elected to municipal council he would yell “SUCK MY COCK” [sic] to Mayor John Tory, refers to a named woman as a “CUNT”, and mocks sexual assault victims

- the front page image and text display gross bigotry against the Muslim community (as does the rest of the article at p.4) - pp 8/9/11 contain bizarre allegations that Sophie Gregoire is a member of a Satanic cult, drank menstrual blood and repeated references to &quot;fags/faggots&quot;, homophobic abuse, &quot;Satanic Jew&quot; as well as encouraging sexual harassment of women - the entire newsletter contains misogynist language repeatedly referring to women as &quot;sluts&quot;, that women are inferior to men, that a named woman had &quot;grope worthy breasts&quot; - p19 - the letters to the editor section refers to a named woman as a &quot;cunt&quot; and promotes Holocaust denial

- the cover image and text display bigotry against the Filipino community - p 2 refers to women as &quot;cunts&quot; - pp 7/10/11/13 promote Holocaust denial and anti-Jewish bigotry with Mr. Faed&#39;s ad appearing on p7 - p15 refers to women as &quot;dykey gals&quot; and a named woman as likely having been sexually abused as a child and one who enjoys sexual assault - further, that she was a &quot;feral shrew&quot; in need of &quot;domestication&quot; - p16 includes anti-Jewish bigotry - p19 again refers to &quot;fags&quot; and a named woman as a &quot;cunt&quot;

- p3 repeatedly describes a named woman as an &quot;attention whore&quot; - Mr. Sears also indicates that he is seeking a &quot;token Jew&quot; to write a column for the newspaper but that the articles must not insult his &quot;Holy Trinity&quot; that includes Adolf Hitler and National Socialism - p6 describes African-Americans as &quot;Negroes&quot; - refers to a transgendered individual as a &quot;FAGGOT&quot; - p7 immediately above Mr. Faed&#39;s ad refers to Caitlin Jenner as a &quot;fag in drag&quot; and goes on to state that &quot;During rational times in human history, Adolf Hitler&#39;s &#39;natural order&#39; would prevail.&quot; - p11 argues that Jews and/or Israelis were responsible for the 9/11 terror attacks - pp16-17 and 19 engage in extensive Holocaust denialâ&amp;#x20AC;Š

QR&amp;O 15.09 - USE OF RANK TITLE AND WEARING OF UNIFORM AFTER RELEASE (1) The Retired Lists maintained by the Canadian Forces were abolished on 26 February 1970. (2) A former officer or non-commissioned member who was honorably released prior to or after the coming into force of this article after having served in the Canadian Forces for not less than 10 years, may use the rank title held by him or the designation of rank authorized to be used by him at the time of his release and, when so used, the word &quot;(Retired)&quot; or its abbreviation &quot;(Ret&#39;d)&quot; shall be included.

Today is INTERNATIONAL RAPE DESENSITIZATION DAY! Use &quot;RAPE&quot; in conversation whenever you can: &quot;$6 for a latte is RAPE&quot; &quot;The taxman RAPED me&quot;

DIMITRI THE LOVER @dimitrithelover May 28

DIMITRI THE LOVER @dimitrithelover May 13

DIMITRI THE LOVER @dimitrithelover May 6

LOVEMAKING TIP: If you&#39;re on top &amp; she pushes you oďŹ&amp;#x20AC; to alter position SHE&#39;S TESTING YOUR AUTHORITY! Slap her, push her down &amp; RAPE HER ASS

One of my #PUA clients tore dress oﬀ slut--&quot;NO Means NO&quot; was on panties! As taught he translated it &quot;If you can read this NO means NOTHING”