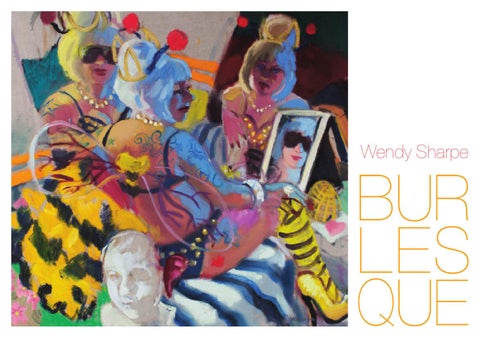 Wendy Sharpe and the burlesque Theatre, on stage and back-stage, has long inspired Wendy Sharpe. There are many sketchbooks filled with drawings she has made of stage performances. For these, her most recent works, she sought out burlesque shows, including Sydney’s Burlesque Ball, Pretty Peepers cabaret, Anything goes and Dr Sketchy’s. In Paris she spent time drawing at La Bellevilloise and La Cigale “as well as venues so small they can only fit a dozen people”. She has also had individual performers sit for her in her studio. The highly choreographed and sanitised Moulin Rouge of the present-day doesn’t interest her. “Burlesque should be satirical, bawdy and raw. I love the craziness and costumes and lack of them … that it is all kinds of women.”

I have always loved the theatre, dramatic lighting and the contrast between back-stage and the magic world of the stage. Wendy Sharpe painting Venus Vamp in her Sydney Studio

She is a great admirer of Toulouse-Lautrec, whose paintings, drawings, prints and posters of promiscuous Paris nightlife in the latter part of the 19th century are legendary, so it seems only appropriate that the studio she and her partner, Bernard Ollis, have in Paris, is quite near where Lautrec’s was once. His gritty behind-thescenes realism has certainly stimulated her to be equally fearless. All things theatrical interest her – the sets, the elaborate costumes, extravagant hairstyles and make-up. She delights in vivid colour, the texture of different materials and the exposure of flesh. In these recent works she has taken even greater licence by ramping-up her palette, experimenting with chance effects and unexpected colour combinations, resorting to using theatre lights and colour filters in her studio to recreate the atmosphere whenever needed.

The evocative words of J K Huysmans about the risqué dancers of the Folies-Bergère in Parisian sketches (1880)* could just as well apply to the women in Sharpe’s latest paintings: They are outrageous and they are magnificent … powdered and painted, eyes drowned in a smudge of pale blue, lips ringed in startling red, their breasts thrust out over laced corsets, exuding waves of opoponax which they disperse by fanning, and which mingles with the strong aroma of their underarms and the subtle scent of a flower expiring on their bust.

These latest drawings, gouaches, pastels and paintings are Wendy Sharpe’s most audacious to date. Subject, colour and painterly exuberance suggest an ever-growing confidence and willingness to take risks. Undoubtedly one of the best known figurative painters in Sydney, she is also one of the most accomplished and exhilarating. Looking at her work is a joy, reflecting the pleasure she has in her subjects and in the making of her art.

A Note on the Exhibition – Wendy Sharpe 2012 “... Burlesque if you look it up in the dictionary says that, for the sake of laughter, vulgarizes lofty material or treats ordinary material with mock dignity. So with that in mind I leap gaily forward into the unknown.”

This exhibition was derived from attending many burlesque shows as an audience member or back stage. I tried to avoid the over produced Las Vegas show girl type as well as bland strip shows, instead I am interested in the more satirical and subversive small scale shows. This includes shows in Inner Sydney, such as the Art House Hotel also in many venues in Darlinghurst, East Sydney, Enmore, Erskineville, Newtown and Marrickville. In Paris I went to various Burlesque Shows at venues including, La Cigale, Theatre Adyar, Le Feu de la Ramp, La Bellevilloise (home of La Cabaret de Filles de Joie) and also in the smallest theatre I have ever seen down an alley in Montmartre! Thank you to performers and models, Annick Saint, Cherry Lush, Fabienne Benveniste (Isabelle de Lussac) and Rafy Limoges (Lara de Douai) both from Paris, Glitta Supernova, Grace, Heidi Hula Hoops, Mayela de la Rue, Mia Mortal, Sarah (as Marilyn), Venus Vamp, Wendy Dys (and her Art Babes), Yaz. With special thanks to Jac Bowie and the all performers in the 2011 Burlesque Ball, for allowing Glitta Supernova at Pretty peepers Cabaret Imperial hotel Erskineville

me back stage at the Enmore Theatre, to draw and photograph. Glitta Supernova and the other performers for allowing me to hang around the dressing room in the Imperial hotel during “Pretty Peepers” Cabarets, Erskineville. Wendy Dys and her mother Yvonne for their help and hospitality in Adelaide. To the Demoiselles of Darlinghurst who welcomed me into their inner sanctum and allowed me to draw them, and also to Katie Bell and Xavier Love Bomb for their help. Artwork Photographed by Peter Jones, Martin Lane, David London and Tracy Schramm Performers Photographed by Wendy Sharpe