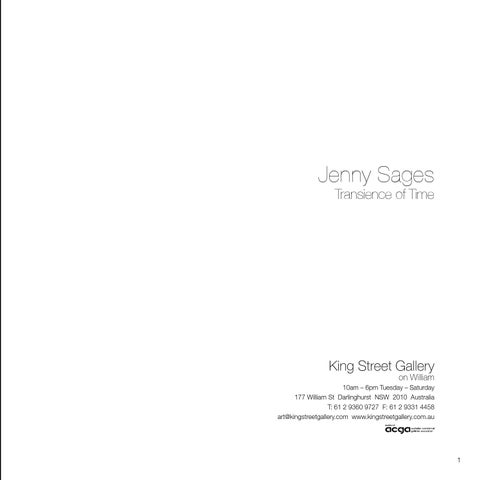 Jenny Sages (born 1933, Shanghai; arrived Australia 1948; lives in Sydney) Jenny Sages’ understated paintings have a quiet, nuanced beauty. Her vision is abstract, organic, poetic and intuitive rather than rational and representational. It is both intimate and overarching, but never detached. Her abstraction is grounded in the small details of organic life - the shapes, the tones and textures of vegetation, the desiccated skins of animals, the weathered patina of abandoned things. Yet it is imbued also with a larger, more ineffable dimension. This may have something to do with a poetics of immanence, the apprehension of beauty and meaning that is encoded in the nature of things, and connecting the organic, mortal universe. Her paintings are testaments to her sense of connection with the natural environment of the inland. For twenty four years from the mid 1980s until 2008 Sages made annual sojourns with groups of women friends to walk the land and paint the landscape. Over many years of trekking through the landscape of Central and Northern Australia she developed lasting friendships with local indigenous people, and has gained a partial insight into their traditional relationship with the land. Her approach to abstraction is not imitative of Aboriginal art but there are affinities evident in her repetitive organic rhythms and textures, and in the underlying allusions to nature as a well-spring of spiritual understanding. Rosalie Gascoigne’s poetic assemblages of found, weathered things are another influence that resonates through her work. Sages makes each painting by following an intuitive process, never quite knowing where she is going to end up. However she works within the parameters of an habitual approach. In 1991 she wrote, ‘The creative process is a distillation of experiences which in turn beget a concept which is converted into a visual image captured in material form.’ Starting with subtly textured, hand-made paper or with board, she applies encaustic, oils and pigment, impressing the soft waxy surface with delicate linear traceries and scratchy markings, into which she works earthy pigments. She eliminates nearly all but the most subtle colour to allow the luminosity of the encaustic to emit a quiet, meditative presence. Jenny Sages is a graduate of the Franklin School of Art, New York. She did not turn to art full time until 1985, after a successful career as a freelance book and fashion illustrator. In addition to her landscape paintings she is a highly regarded portrait artist. She has exhibited frequently in the Archibald and Wynne Prize Exhibitions, winning the Wynne Prize in 2005. She was awarded the Portia Geach Memorial Award for portraiture twice in 1994 and 1992. Her work has been acquired for many public collections including the National Portrait Gallery, Art Gallery of New South Wales, National Library of Australia and State Library of New South Wales. Margot Osborne Curator and writer Calligraphy 2011 Encaustic and pigment on board 30 x 30cm

Transmutation 2011 Encaustic and pigment on board 60 x 40cm