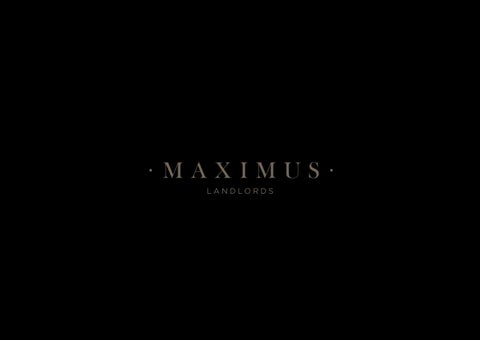 Who We Are Maximus is a privately owned, UK-based outdoor advertising company, originally formed as a premium billboard developer specialising in City Centres. We have since grown to become the market leader in mega sites across the UK, with an ever-expanding network that includes some of Europeâ&#x20AC;&#x2122;s most iconic locations.

First back to back deal reached with Primesight on Commercial Road

2005 Retained by Outdoor Plus as site developer

First selfâ&#x20AC;&#x201C;sold Mega Banner developed at Fulham Broadway with the launch of the Beatles on iTunes

UK wide expansion completed with the launch of our first national campaign with Confused.com

GENERATING INCOME FOR YOU Whether you are a private landlord, commercial property company, local authority, government body or charitable organisation, we could be generating valuable income for you through outdoor advertising. Our sites are chosen with careful consideration and must fulfill various specific criteria from the outset, the main one being that they should be highly visible to a large number of people. Potential locations could be anywhere; gable walls, development sites, restoration projects, scaffolding rigs and unused land could all become a suitable asset. Outdoor advertising can work for landlords in the short, medium and long term. Long-term agreements can substantially increase yields and asset values for property owners whilst short to medium term sites can provide substantial extra capital and mitigate potential build costs.

100% privately owned and with 14 years of pure organic growth, no external investors and no debt, Maximus represents one of the strongest and most secure covenants in the outdoor media sector. The entrepreneurially minded nature of our business gives us a unique ability to negotiate deals on a site-specific basis. We create bespoke agreements to cater for the varying individual needs of landlords across the property sector. With a vast industry knowledge and long-established relationships with the largest media buyers in the market, our experienced sales and marketing team are able to achieve the highest levels of occupancy. We deliver what we promise.

Maximus successfully raised much needed funding to facilitate a major facelift to the tired facade of this listed central London property in the heart of Fulham. In conjunction with Triton Building Restoration and the local Council the owner was able to execute substantial works over a period of 18 months, drastically improving the appearance and structural integrity of the building. The building remained fully tenanted during the works, allowing the owner to continue renting the property to all existing tenants. Maximus have become experts with tenanted buildings by adapting installation and delivery methods to minimise impact. Using light-permeable PVC mesh materials, Maximus was able to provide the client with the highest standard of production while still respecting the wellbeing of the residential tenants. Contract Term: 18 months

BUILDING LASTING RELATIONSHIPS With our heritage in new billboard site development, the foundation of our business stems from landlord relationships that include all sectors of the property market, including funds, public companies, government agencies and private landlords. We are firmly of the belief that our success rests on building lasting relationships with our landlords. We regard our Landlords as partners, focusing on long-term relationships. In many instances we operate a partnership model creating low risk, high reward deals to maximise income for both parties with fully aligned interests. Our reputation has been built on consistent delivery for both Landlord and Advertiser.

â&#x20AC;&#x153;We have been working with Maximus for many, many years, they deliver what they say, very simpleâ&#x20AC;? - Enstar Capital

Some of Our Clients

WE ARE PROUD TO DISPLAY MANY OF THE WORLDâ&#x20AC;&#x2122;S GREATEST BRANDS

Over the last 30 years Whiteleys Cottages had fallen into ruin and had become a focal point for local crime. Maximus worked closely with the owner and Hammersmith & Fulham Council to shroud the building creating an iconic outdoor advertising location. The succesful restoration, fully sponsored by advertising, is another example of how Maximusâ&#x20AC;&#x2122; model can offer an alternative to conventional funding streams. In a practical sense the shroud was also of great benefit to the workers on site, providing a welcome shield from the elements as well as the busy road. Without the funding provided by outdoor advertising this building would potentially have never been developed. Contract Term: 12 months

Most of our sites are located on multi-tenant occupied properties. We understand the importance of working with existing tenants both commercial and residential. This ability is key to making advertising revenue a reality, allowing landlords to retain their core existing tenant income and gain the additional income we offer.

Planning permission is of the upmost importance in the development of our sites. Maximus has a proven track record in dealing successfully with many Councils and local communities across the United Kingdom. As part of our commitment to you, Maximus provide a full service in-house planning department that brings together a team of the most experienced personnel in the industry to take the lead on what is a constantly evolving and often complex process.

â&#x20AC;&#x153;Refreshing to see the importance placed on taking a long term view with the Councilâ&#x20AC;? - Cringle Corporation

Billboards are the cornerstone of our business and indeed where it all began 14 years ago. The M4 Max Tower, in close proximity to Chiswick roundabout, was located on the wealth corridor, connecting central London with affluent areas to the west of London. In certain locations, sites such as this can turn baron and disused areas of estates into extremely valuable land and create a substantial increase in annual yields. We are currently in the process of developing a network of digital mega sites in iconic locations and key arteries both in London and Nationwide. Contract Term: 20 year lease

We understand the importance of maintaining and restoring the wonderful architectural and artistic heritage that exists within the United Kingdom as well as the vital redevelopment of important urban areas. We specialise in fund-raising services aimed at restoring sites of historical and local importance, offering invaluable funding that these projects so often require. In partnership with both private and public property owners, Maximus have contributed to a number of important restoration projects. With innovative solutions and bespoke tailoring, these projects take place with an absolute respect for the architectural context of the building and its surroundings. Using exceptionally life-like architecturally drawn imagery and appropriately selected advertising campaigns our aim is to be a true contributor to the local urban landscape both during and after the renovation.

“… this is a win-win for Councils and Landlords, there is no other way of looking at it; Maximus have restored most of Fulham Broadway over the years. We’ve witnessed it.” - Investinc

Maximus partnered with Liverpool City Council while much needed restoration was carried out to this important, grade I listed, Georgian building. Our proposal to the Council offered the opportunity to generate ancillary revenue from a costly, on-going programme of works. The highest standard of materials and installation techniques were employed to ensure that the advertising was delivered in a manner that was sympathetic and respectful to John Wood the Elderâ&#x20AC;&#x2122;s 1754 landmark in British architecture. This unique and exciting project demonstrates Maximusâ&#x20AC;&#x2122; potential to help create more sustainable funding platforms for restoration schemes, both for local government and private landlords. Contract Term: 12 months

After months of consultation Maximus were delighted to be instructed by the landlords of Munro House to help sponsor its external restoration after it fell into disrepair. Since being transformed into the Leeds Arts Centre, this mixed-use creative space has become a real fixture in modern Leedsâ&#x20AC;&#x2122; cultural hub, an area unofficially known as Leedsâ&#x20AC;&#x2122; Arts Quarter. Working closely with the landlords and Leeds City Council, Maximus were delighted to be part of its restoration as well being able to create one of the most iconic advertising locations in the north of England. At over 390 sqm in size and located directly opposite the new and award-winning Victoria Gate shopping centre, the site quickly became one of the most prominent and in-demand advertising sites on the market. Contract Term: 16 months

Media revenue maximisation for large property funds has become a significant aspect of our business. The idea of providing this service to landlords is something of an evolution for a traditional billboard company; essentially we use our knowledge and experience of the industry to advise clients on how to best maximise the outdoor media opportunities that may exist within their portfolios. Over the years we have helped successfully generate considerable extra income which would have otherwise gone untapped for many landlords.

Working with Southwark Council and a young, innovative property company, Maximus created an iconic visual amenity in the urban landscape. Forming part of the overall regeneration of this area this ongoing project has yielded useful revenue for the building’s owners while also adding a valuable addition to the street scene, viewed by many as enhancing the overall look of the area. Maximus are proud to be involved with the charity ‘Space for Giants’ who work tirelessly to preserve the future for elephants in Africa. Given the association by name with this location Southwark Council and the Landlords were delighted by the opportunity to support this important cause through the donation of the advertising space on the site. At Maximus we are always on the lookout for ways in which our business can support charities, both internationally and for causes in the local boroughs where our sites are located. Contract Term: 20 months