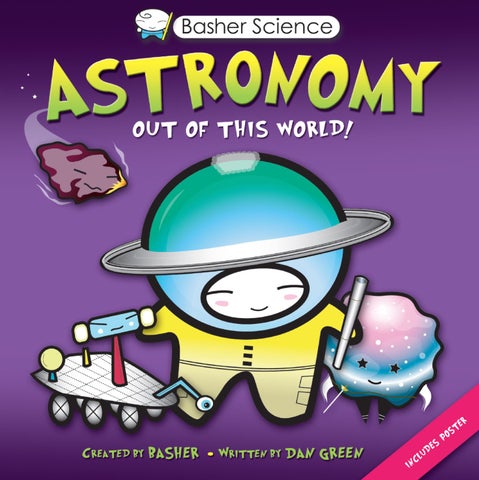 The Universe/Galileo Astronomy is the study of everything in the universe, from all the celestial bodies to space itself. From the Greek for “law of the stars” (astron means “star” and nomos means “law”), it is a science with a wonderfulsounding name, and one that is truly out of this world! It’s packed full of planets, stars, galaxies, telescopes, space missions, discoveries, and dreams. When you gaze at the night sky, you are looking at the best story ever told! Galileo Galilei (1564–1642) was the godfather of modern astronomy. Even though he would have been mindboggled by the complex and enormous reality of what we know today, this Italian superstar scientist blazed a trail, leaving his mark for all to follow. Galileo stood out because he believed in what he could see with his own eyes. Although the best telescopes of the day allowed him to peer only dimly into the solar system, he even demonstrated that the planets orbited the Sun and not Earth. And 400 years later, we know so much more. But 95 percent of the universe still isn’t understood, which means that there is plenty of opportunity to discover some awesome new characters. 4

I am a big, happy family that lives in a region of space one million times wider than Earth. The Sun is like a hippo Hula-Hooping through space, creating a graceful and fantastically wide shape. Big Daddy Sun holds almost all of the weight, and his enormous gravity makes the eight planets (with their 166 known moons), three dwarf planets, plus billions of asteroids, comets, meteoroids, and interplanetary dust, spin like a vast whirling tutu around him. All the main planets circle the Sun, in the same direction, on a flat disk around the Sun’s center. Distances between them are immense—Saturn is twice as far from the Sun as its inner neighbor, Jupiter, is. With light zapping along at 186,000 mi. (300,000km)/s, it would be five hours before the farthest members of the family would notice if the Sun was turned off!

Basking in toasty warmth, these characters orbit closest to the heat engine of the solar system, the Sun. The group’s four planets—along with Asteroid Belt—are iron-hearted hard cases with metal cores and rocky exteriors. These rocky rebels used to be hot stuff, but their once-hot liquid centers have cooled and solidified. Only Earth still has active volcanoes burping out molten gas and rock. Tons of high-tech machinery whiz around this neighborhood. Here, too, lies the solar system’s only true alien planet— Earth—with its strange inhabitants! 10

Hanging in the night sky like a bloodshot eye, I’m a rusty old warhorse, named after the Roman god of war. Iron minerals give me my reddish inflamed look. I was once a delightful planet with water flowing over my rocky surface, but these days I’m a chilly, hard-bitten world of dead volcanoes and dry rift valleys. Dust devils and tornadoes swirl across the landscape, but because my atmosphere is now very thin, there is little strength to them. At one-half the size of Earth, I don’t have the mass to hold onto my surface gases forever, or the volume to fuel a fire at my core to keep me warm. Dried riverbeds and polar caps of dry ice are the only traces of my suppressed youth. Earthlings are fascinated by the idea that I could be home to Martians, yet despite all their probing, there’s still no sign.

Life’s a gas for these lords of the solar system. The four imposing outer planets, made of vast amounts of hydrogen, comprise—along with their enormous moons—more than 99 percent of the mass of everything that orbits the Sun. These planets are the only ones you’d spot from outside the solar system. Powerful atmospheric forces keep this gang of ring-wearing buccaneers buzzing. The great pressure created by their layered clouds crushes hydrogen until it forms liquid seas buried deep in the haze. 30

Forget about the charms of lovely Venus: I am the pearl of the solar system. I grace the skies dressed in demure creams and browns, with elegant bands around my middle and a six-sided crown of clouds floating over my north pole. Electric blue lights play around both my poles, a lot like Earth’s northern and southern lights. Like a skilled Hula-Hoop dancer, I spin a number of rings around my middle. Made up of everything from dust to car-size boulders of ice and rock, these flat rings are kept neatly in place by the gravity of my shepherd moons. My dazzling hoops are very thin (about 164 ft. or 50m) and can be seen stretching out more than 155,000 mi. (250,000km). I’m made of such lightweight gases that I’d float on water like a giant inflatable ball (if you could find a big enough tank)!

Itâ&amp;#x20AC;&amp;#x2122;s all glitter and celebrity as this bunch of up-andcoming young bucks graduates from Star Birth Nebula and sets out on the road to stardom. Each one tries to get nuclear fusion reactions going inside its core (to power its radiant brilliance) and to strike a balance between its explosive energy and crushing gravity. But the life of a Rising Star is full of dangerâ&amp;#x20AC;&amp;#x201D;it might burn too brightly and blast itself apart or be blown away by its stronger classmates. But should it start to shine, its destiny is decided by the amount of material it has. 56

Local Group A 13.7-billion-year-old galaxy, where humans live A spiral home to up to 500 billion stars Has four arms: Perseus, Cygnus, Centaurus, Sagittarius

Hanging in space like a gigantic pinwheel, I am The Galaxy—the only one that truly matters! I’m the place that your Sun and billions of other stars call home. I’m mind-twistingly massive—100,000 light-years wide—and the Sun takes 225 million years to go around me just once. With the Sun buried snugly inside the Orion arm (a branch of the Sagittarius arm), your view of my huge central bulge is blocked. However, on dark nights, its glare is enough to make a pale stripe of stars across Earth’s sky. My lovely big belly is crammed with red and yellow stars, which make me look like a fried egg—no “yolk”! Buzzing around in a halo are tight bunches of ancient stars called globular clusters, which often collide to form superhot blue stragglers. But my center also hides a dark secret . . .

Galaxy type: barred spiral It gets its name from looking like Size: 100,000 ly across a trickle of spilled milk in Earth’s sky. Thickness: 1,000 ly Copyrighted Material

Local Group A sleeping monster at the heart of the Milky Way galaxy This beast has the strongest force of gravity in the universe At its core, time stops and the laws of physics no longer apply

Pitch-black and still withholding my secrets from scientists, I’m the dark heart of a galaxy. I have a furious temper and a powerful appetite. Not even radiation can escape me—I eat up light for breakfast! In the Milky Way, a mature galaxy, I’ve vacuumed my surroundings clean, leaving a bald patch around the middle. My massive cargo of star systems slowly circles me, while I play lord of the dance at the center. In the youngest galaxies far away, other SMBHs reveal their dark sides. They make distant galaxies flash frantically as they violently rip apart the stars that spiral into their gaping mouths and then burp out huge fountains of antimatter.

Milky Way’s SMBH: Sagittarius A* The SMBH in the Milky Way weighs Distance from Earth: 26,000 ly as much as two million Suns! Number of SMBHs discovered: more Copyrighted Material than 30

Deep Space Gang A blurry-eyed telescope that became a hero of astronomy HST can see in ultraviolet, infrared, and visible frequencies Can focus on a tiny blip of light millions of light-years away

Hubba-hubba. I’m a complete hunk! Flying in low-Earth orbit and shaped like a flip-top trash can the size of a school bus, I’ve been sent to take snapshots of space without any background light or pesky atmospheric wobbles. My beady eye has spied stuff all around the Milky Way, but I’ve made my name by looking outside the galaxy. Peering into the depths of space, I’ve been able to look back in time, because light takes many, many years to travel from distant galaxies. By capturing light from galaxies 13 billion light-years away—the farthest ever seen—I’ve shown astronomers the universe as it looked that long ago. I’m the original time-traveling hero!

This strange crew underpins the universeâ&amp;#x20AC;&amp;#x201D;they help tell us how it all began, govern the shape of everything, and determine how it grows older. They are the driving forces behind our 13.7-billion-year-old cosmos, and since space is 99.9999 percent nothing, they know that things made of matter are very insignificant. The Universals are a bewilderingly clever bunch, and by understanding them, we can begin to answer mind-boggling questionsâ&amp;#x20AC;&amp;#x201D;such as what is the universe, where did it come from, and is there anything at all outside it? 112

Absolute magnitude A star’s true brightness in space. Apparent magnitude A star’s brightness as seen from Earth. Asteroid A space rock orbiting the Sun, found mostly in the doughnut-shaped belt between Mars and Jupiter. Astronaut A person who travels in space. Astronomer A person who studies the universe. Astronomical unit (au) A unit used to measure very large distances—1 au is the average distance between Earth and the Sun (93 million mi./149.6 million km). Atmosphere A layer of gases surrounding a planet, moon, or star that is held in place by its gravity. Axis An imaginary line that goes through the center of a planet or celestial body, around which it rotates. Brightness A measurement of a star’s light or total radiation given off each second. Also known as luminosity. Celestial object Any object seen in the sky, whether a planet, star, or galaxy. Core The central part of a star or planet. Corona A superhot outer layer of gas around the Sun, visible as a halo during a total eclipse. Crater A bowl-shaped hollow on the surface of a planet, moon, or asteroid, formed when a space rock crashes into it. Crust A thin, rocky layer covering the surface of a planet or moon. Eclipse When a celestial object moves into the shadow of another object, partially or Material fully obscuring it from view. Copyrighted

The universeCopyrighted is an enormous Material place. Imagine it as the home of a crowd of cool cosmic characters, each with their own personality. This book is your essential guide to these out-of-this-world beings who make the universe tick. Praise for BIOLOGY: “Fresh, sassy, and smart.” Children’s Literature

Praise for THE PERIODIC TABLE: “The periodic table may be the bane of newbie science students, but The Periodic Table: Elements with Style! . . . aims to change that.” Publishers Weekly “[An] inviting ready reference.” Bulletin of the Center for Children’s Books “Who said chemistry had to be boring?” Teens Read Too AN AMERICAN LIBRARY ASSOCIATION QUICK PICK 2008

Praise for PHYSICS: “Quirky, fact-filled, and fun, it’s got great visual appeal . . . I defy anyone not to pick it up.” Sue Steel, The Bookseller “Handy as a supplement to a physics curriculum.” School Library Journal 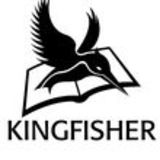