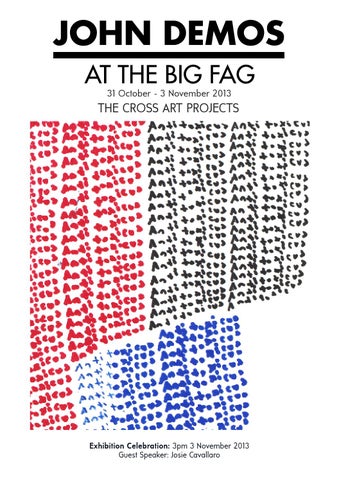 Surprisingly, The Cross Art Projects has survived 10 years in Kings Cross. What better way to celebrate than with John Demos’s exhibition - the outcome of his exciting residency with Big Fag Press, part of a wider celebration of the Supported Studio Network and Accessible Arts. The ‘self-taught’ artist Gina Sinozich inaugurated the new Cross Arts concept space in late September 2003 with her series ‘The Iraq War Paintings’, a response to the American invasion of Iraq. This profound historical document on suffering as spectacle, and the catastrophic impact of war on innocent people was carried via the device of autobiography.

John Demos describes the institutions and social structures he encounters by transforming their names or signifiers into the very forms and fabric of his prints, paintings, drawings and objects. His intellectual concern is to describe how these structures work and influence its most humble citizens—usually by process of inclusion or exclusion. The work of both Demos and Sinozich has reached wider audiences with the helping hands of remarkable organisations. In 2003, Sinozich was mentored by curator Peter Fay and director Kon Gouriotis at Casula Powerhouse Arts Centre; and the works on show in this exhibition were developed by Demos in collaboration with Louise Anderson, Diego Bonetto and Lucas Ihlein at Big Fag Press, assisted by Kristina Tito at Project Insideout. In the relational hothouse of such studio encounters, avant-garde artists may well find inspiration from outsiders and vice versa. Sinozich and Demos are talented artists and clever social commentators whose engaging works may well transform our art heritage. Celebrating their creativity urges us to keep struggling to maintain public access at all levels, including those challenging cultural gateways and their custodians. The Cross Art Projects is pleased to continue exploring contemporary work and curatorial projects that reflect the multiple relationships between art, life, and the public sphere.

How does the work of artists with a disability get framed by the artworld? What goes on with the process of distributing, promoting and analysing the work of artists with a disability? What structures of power and knowledge are involved? What criteria for judgement of “quality” are exercised? Who is “in the know”, and who is providing the content? Who is asking these questions?

These were the issues I was keen to explore when I began nosing around the Supported Studio Network nearly a year ago1. This research was commissioned by Josie Cavallaro of Accessible Arts. Part of her remit involved getting discussion going about art and disability, beyond the confines of publications focusing on art therapy, mental health, and outsider art. Josie’s thinking was that if such questions could slip between the pages of art journals and magazines, the debate might begin to broaden out. Ultimately, Accessible Arts is seeking to expand opportunities for artists in the Supported Studio Network. “Supported Studios” are places which facilitate the production and distribution of work by artists with a disability - there are a dozen or so such studios around Australia, including Arts Project Australia in Melbourne, Art in the Garage in

Bega, and Bindi Arts in Alice Springs. The studios aim to chip away at the paternalism and connoisseurship which often characterise relations within the intersecting worlds of art and disability. In March 2013, I was able to deepen my understanding of some of these issues when Big Fag Press began hosting artist John Demos in our studio at First Draft Depot in Woolloomooloo. John is a veteran draftsman, printmaker and ceramicist. He is supported by Project Insideout, whose manager Kris Tito helped to broker the relationship with Big Fag Press. Ostensibly, Big Fag was supposed to be “mentoring” John, but in reality we were simply doing what we normally do - providing space, offering technical advice about occult things like digital pre-press and offset lithography, and generally just hanging out while

artists try to mash their work through the crude filter of our four-tonne printing machine. It’s the “hanging out” where the real work gets done. From Big Fag’s perspective, the lion’s share of this work was done by artist, designer and administrator Louise Anderson. Louise paid close attention to John’s method of production, and together they workshopped how his painstakingly crafted drawings might make the leap into offset print editions. John builds up large fields of words, letter by letter, with ballpoint pens or textas. The writing wobbles organically across the page, constrained by the reach of the artist’s right hand. The words “Universities”, “Deans”, “Transcripts” and “Brains” crop up again and again. When I first saw these pedagogically-themed drawings, they made me think of the old fashioned punishment doled out to naughty schoolchildren - writing lines. Far from punishment, the writingdrawing process in John’s text work is, I’ve observed, a kind of meditation: a way of dwelling in complex thought, by repeating, mantra-like, words rich in

connotation. And when viewing these sort-of concrete poems, the ad-nauseam repetition begins to break down meaning. Words decompose themselves into ciphers, into glyphs, into the constituent squiggles - microdrawings which are at the heart of scribal culture. To mediate these heavily worked pages using offset lithography is to perform a crafty magic. While it takes John weeks of labour to inscribe a single page; a few days yakka on the Big Fag can multiply that labour fifty times over yet each sheet still looks, cunningly, like it was delicately penned by hand. Hot off the press, some of the printed pages are dutifully reworked with John’s pen, further confounding the boundaries between script and print. What will John do with all this paperwork? Hanging out for long hours at our studio has allowed a camaraderie to slowly build between John and the Big Fag personnel; it’s also facilitated some accidental meetings with other artists occupying studios at the First Draft Depot, as well as arts workers and curators who drop by to see what we’re up to. As a result of meeting gallerist Jo Holder an exhibition of the work generated during his time at Big Fag

Press has been generated for The Cross Art Projects. While working with John, we’ve become acutely aware of some of the politics of representation surrounding art and disability. The question of voice has come up repeatedly. Who gets to speak on behalf of whom? Mostly, it seems, John is spoken of by others (as I am doing right now) - and this is particularly the case with the negotiations that are necessary in the professional life of the exhibiting artist. Halfway through the residency project, we engaged emerging filmmaker Josh Charles to produce a short documentary, offering an insight into John’s working process through moving image. But the doco has also proved an effective and gentle tool for John to

speak on record - on behalf of himself - about his work, and about his place in the (art)world. How will my work be presented? In what context? Am I being paid enough? How do I see my career trajectory? Currently, John works out these aspects of professional practice with support from Kris Tito at Project Insideout. In a recent article, Hugh Nichols described the relationship between artists and supported studios as a “scaffolding” - a structural framework essential in the steady building of the artist’s own networks2. As John’s connections begin to expand - as they have done during his residency at Big Fag Press - he will increasingly represent himself within a more diverse set of galleries and discourses. 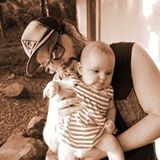