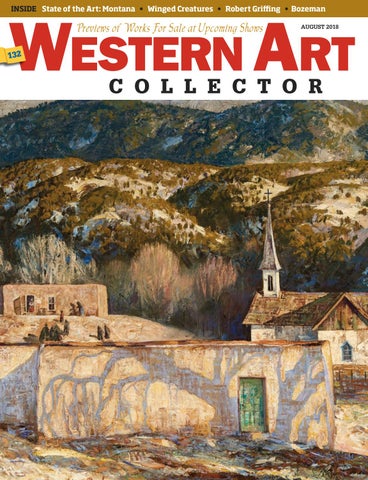 aryvonne Leshe remembers joining Trailside Galleries in October of 1977. It was four days before the Cowboy Artists of America show, which was at that time held in Phoenix. “Talk about being thrown into things. I didn’t have much training on anything, and the gallery was so busy I didn’t have time for training,” she says of her debut in the Western art world. “At that time Trailside represented about 80 percent of the CA, so we had everyone coming in—Joe Beeler, John Clymer, Melvin Warren, Johnny Hampton, Fred Fellows…it felt like Christmas. It was a great way to start in the business. I had moved out from the East Coast and was suddenly right in the middle of a marvelous stretch of Western art in the 1970s.” They have a name for this phenomenon: baptism by fire. Not only would Leshe survive the heat, she would come out of it anointed and ready to wield that fire for decades to come. Today, Leshe, who has been with the gallery for more than 40 years, is managing partner of Trailside, which is celebrating its own milestone beginning August 13 with the exhibition Celebrating 55 Years of Excellence in Western &amp; Wildlife Art. The show will

bring many of the gallery’s top artists—JoAnn Peralta, Morgan Weistling, Z.S. Liang, Kyle Sims, Adam Smith, Bonnie Marris, Ezra Tucker, Ken Carlson, Mian Situ and many others— together for a celebration that will look back, and also forward, on Trailside’s monumental presence in the Western art. The gallery was founded by Dick Flood Sr. in 1963. Though it has largely been based in Jackson Hole, Wyoming, there have been numerous galleries around the West throughout the last half century, including in Idaho, California, Texas and at Phoenix Sky Harbor Airport, which was a first for a Western gallery, as well as, until recently, Scottsdale, Arizona. The early- and mid-1960s proved

to be an important time for Western art. This was right in the middle of the cowboy renaissance that would lead to the creation of the CAA, push away from modernism and make household names out of artists like Frank McCarthy, Clymer and Beeler. “You have to imagine that there wasn’t many Western art galleries around back then, and that’s why the owners were able to attract some of the best artists. They were lucky, because oil was booming and collectors were excited about these terrific artists, many of them coming from illustration,” Leshe says. “And I think we still operate on some luck even today. We have tremendous artists, and they attract excellent collectors.” Leshe remembers those boom years fondly, when artwork would fly out the gallery at an astonishing speed. And prices went up, up, up. “I think we were all surprised how immensely popular Western art was becoming. When these illustrators moved into Western art, even they were surprised. I remember a John Clymer piece once sold for $80,000. John was so astonished he kind of fell backward onto a sofa—I’m glad there was something behind him to catch him. He never thought in his lifetime he would sell a work of art for that much. Of

course, we would end up selling some of his work later for a quarter million dollars, which was another level entirely,” she says. “The shows were often parties, including the big CA shows. The artists would sell everything and there would be a big party afterward with someone always playing guitar. Everyone was just happy to be around their peers and our collectors like Boone Pickens and Ross Perot, just really interesting people. People had a passion for it and it was fun.” Leshe, who became managing partner in 1994, says that the times have changed: there are more galleries, more artists, more auctions, more competition and just more opportunities to purchase artwork, whether online or at a museum exhibition. “I even saw a Bitcoin gallery recently,” she adds. The times may have changed, but the gallery still has its mission: to present the best Western art in the country to the best collectors in the country. “We still have our great collectors, but we’re also doing a lot of outreach to find the next generation of collectors,” she says. “We publish a newsletter, we do a tremendous amount of social media, we do some selective advertising. We just want to build strong relationships.” In addition to clients and collectors, a percentage of those vital relationships are with the artists themselves, and Trailside prides itself on working closely with its painters and sculptors, including new, up-and-coming artists. “I love working with them. And I truly care about them. Over the years I’ve been their banker, their psychiatrist, their friend…it’s that

personal attention that makes the relationship work. I’m not just trying to make a buck off them—I’m passionate about who they are and the work they are making,” Leshe says. Recently, when Mark Maggiori was one of Western art’s hottest free agents, he was being courted by galleries around the country. Leshe made him an offer, but she also spoke to the French painter in French. It was a small gesture, but one that helped bring Maggiori into the Trailside fold. “Thank God I didn’t speak Chinese,” she says. The stories go on and on: wildlife painter Dustin Van Wechel found promising early success at Trailside, landscape painter Brent Cotton dreamed of one day showing at the gallery and eventually had that dream fulfilled, and Weistling has had a 15-year career with Trailside that has seen his work become some of the most sought-after work in the gallery. Leshe relates how she went into a gallery and saw a Matt Smith small work and just knew he would be perfect at Trailside—“I have a good eye,” she says, “and his work jumped out at me.” Trailside has also guided Chinese and Chinese-American painters to great success in the American West, including artists such as Liang, Situ, Huihan Liu, James Jiang and Jie Wei Zhou, among others. In addition to paintings, the gallery has been instrumental in Western bronzes, with works by Fellows, Bill Nebeker, Kent Ullberg, Mick Doellinger and the late Cynthia Rigden. When asked about the biggest milestone for the gallery, Leshe was quick to answer: “That we’ve stayed in business for 55 years. We’ve gone through different recessions, the death of some of our top artists and many other things,” she says.

“But finding new talent and building careers is one thing that the gallery has done consistently.” Sims, who will be featured in a small solo show that will complement Celebrating 55 Years of Excellence in Western &amp; Wildlife Art, says that Trailside essentially introduced him to the art market. “They put me on the map,” Sims says. “I grew up as a kid going to Trailside. I have family in Idaho so we would pass through Jackson Hole and we would always stop in. Then at 24 they helped me find early success. It was that early success that helped me keep painting.” Painter and sculptor Fellows, who’s been with the gallery since nearly its inception, sings

similar praises about Trailside. “They’ve been a great gallery and they sell my stuff,” he says, adding that Western art is relying on galleries like Trailside to carry the traditions forward. “When I started out there was 12 or 13 Western shows on TV. There was the Urban Cowboy thing going on. I would walk through the Denver airport and a lot of people were wearing hats and boots. I went through there recently and I was the only one. Same thing at the Dallas-Fort Worth—lots of cowboy hats and boots before, but not now. I was there recently and the little kids stared at me. Times are changing.” He adds, “Artists are competing with the other artists, auctions and sometimes even themselves, so it’s important that galleries like Trailside are there to promote what we do.” And that’s what Leshe wants to do with Trailside, now at 55 years and counting. “Treating artists right and being honest with them—that’s what it’s about for me,” she says. “And selling their work to the best collectors.”