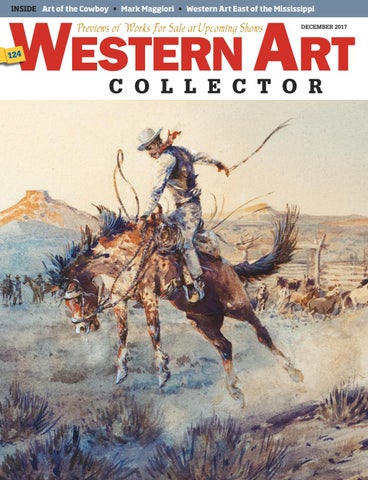 his winter, Trailside Galleries will present their special holiday show The Twelve Artists of Christmas in Jackson, Wyoming, and Scottsdale, Arizona. In Jackson, the show will highlight a collection of small works by wildlife painters, while in Scottsdale, the focus will be on Western pieces. Although in past years the holiday miniature show has featured all gallery artists, this year the theme will highlight a select group of painters who will each be exhibiting at least three small works. Artists participating in the Jackson show include Shawn Gould, Ken Carlson, Bruce Lawes, Jhenna Quinn Lewis, Lindsay Scott, Tucker Smith and Dustin Van Wechel, among others. At the Scottsdale location, the show will include artists such as William Acheff, Steve Atkinson, Robert Duncan, Z.S. Liang, Mian Situ and Jeremy Winborg. The shows will hang through December 15. Trailside has curated these works to give the show a balanced and well-rounded offering of miniature paintings for its collectors. Van Wechel’s Crossing Paths depicts two bison grazing among tall stones on a mountain field, and the scene is imagined rather than referenced from a photograph. “Crossing Paths was inspired by my many encounters with bison while in the field,” says Van Wechel. “I’ve always enjoyed the drama that emerges from the interaction of bison, the landscape and the weather. Here I’ve used all of these elements in a small format to create what I hope is a painterly, dramatic depiction of these icons of the American West.” Farther down the mountains, Liang’s Native American subjects ride horses across yellowgreen prairies. In his work Cheyenne Scout, a single scout takes a moment of pause on the

back of his mount. “I had an Indian modeling session done by the Cheyenne River in South Dakota last summer,” he explains. “When I saw the Indian model ride down from the hill and look into the open valley, I thought it was such a nostalgic scene representing the typical Cheyenne scout in the 1850s to 1870s. His bright yellow deer skin legging works well together with all the greens around it.” Liang’s On the Bozman Trail employs a similar narrative. “I got the reference from the same model session. I found that these Lakota warriors running in the dusty open prairie would be an interesting painting.” This seasonal holiday show opens December 1 and runs through December 16 at both locations. All works will be sold by fixed price draw during a December 7 reception, also taking place in both locations. Fo r a d i re c t l i n k to t he ex h i b it i n g g a l l e r y g o to w w w. we ste r n a r tc o l l e c to r. c o m

This winter, Trailside Galleries will present their special holiday show The Twelve Artists of Christmas in Jackson, Wyoming, and Scottsdale, Arizona. In Jackson, the show will highlight a collection of small works by wildlife painters, while in Scottsdale, the focus will be on Western pieces.