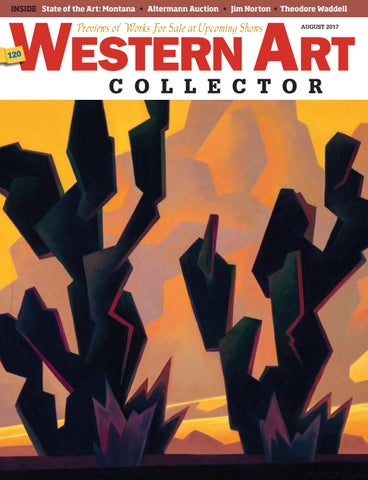 hroughout August, Trailside Galleries in Jackson, Wyoming, will present an exhibition featuring artwork by members of the Society of Animal Artists. The show will highlight an array of subjects—North American mammals and birds to jungle creatures and animals of the African deserts. This diversity is just one aspect of the breadth of the wildlife genre, with the works also being done in a multitude of styles and mediums, making each work unique to the individual artist. Sculptor Dan Chen will present his fish sculpture The Journey of Return, which he says is about familial generations. “We are here because of the last generation and have a responsibility to keep the world they left behind alive,” says Chen. “Same with art; we learn what the generations of the past taught us, so we can

pass it on. Also we have the responsibility to keep creating and pushing forward!” There will be a number of works with bird in the exhibition, including James Morgan’s Center of Attention, Wood Ducks and Jamie Cassaboon’s drawing Peregrine Falcon #1. Of his piece, Morgan says, “In the avian world springtime is dominated by the annual courting rituals of birds. Nearly all are sporting their prime flashy colors. Male wood ducks are very colorful year-round but especially handsome in early spring. There are usually several male birds shadowing one uninterested female everywhere she goes, trying to impress and gain her favor—she is always the Center of Attention.” Cassaboon finds it hard not to marvel at the peregrine falcon. “They’re not just pure speed

and aggression, but patient and deliberate, perfectly evolved for their purpose,” says Cassaboon. “I spent a few solid days watching this beautiful female as she hunted from this perch. She watched carefully from above, all calm potential energy, then exploded into a 100-plus-mph dive at the blink of an eye, returning with her catch time and again.” Other works in the show include the fox paintings Sly by Anni Crouter and Bat-eared Fox Portrait by Carel Pieter Brest van Kempen; the portrait of a baby monkey titled A Little Flirt by Bruce Lawes; and Guy Combes’ piece Cohors Praetoria. Fo r a d i re c t l i n k to t he ex h i b it i n g g a l l e r y g o to w w w. we ste r n a r tc o l l e c to r. co m