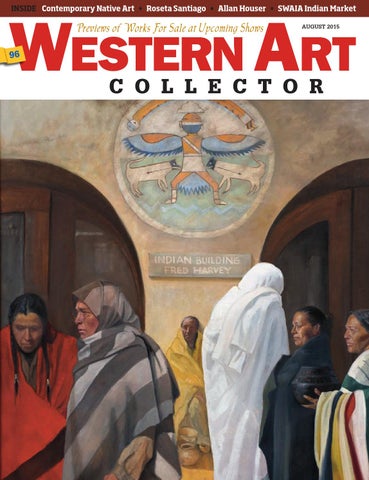 aving grown up in the West, wildlife artist Dustin Van Wechel finds himself drawn to the animals that inhabit those lands. For his upcoming August solo show Wildlife Encounters, at Trailside Galleries in Jackson, Wyoming, many of the pieces will include elk, mountain goats, ravens and more. Painting true to the animal’s form and environment, Van Wechel’s works are composed from photographs and sketches he does while in the field. Every painting has its own narrative, and is also defined by Van Wechel’s application of paint. “I want to have interest in every aspect of the painting. That also includes the physical

quality of the paint,” says Van Wechel. “I like paint texture and brushwork. I like the painting to operate on that level as well as an image. Viewers will see lots of thick paint, and a play of thin and thick paint, brushwork, etc.” And while Van Wechel may revisit some of the same subjects, his goal is to never tell the same story twice. “One thing that’s important to me is not to repeat myself,” he elaborates. “I may paint the same subject matter, but hopefully I am telling a different story and communicating it in a different way.” One of his larger works in the Trailside show is Echoes of Eden, which was inspired by a recent trip to Glacier National Park. “This

is a waterfall that is at the end of a nice hike through a certain park of Glacier. I spent time there relaxing, and in doing so, you think of things that might have occurred at that location,” he explains. “It was really easy to picture elk working their way into the pools that the waterfall was pouring into, doing the same things that I was doing—enjoying the sounds and sights of the water itself.” For his painting Stark Raven Mad, Van Wechel takes a more intimate approach to the subject matter. “I really wanted to focus on the raven and this kind of evening-lit tree stump where the sun is just at its last light going behind the mountains,” he describes. “It

was an opportunity to do really strong color— something that doesn’t show up a lot in my work in saturation.” King for the Day is another work in the show, and it depicts the artist’s favorite subject matter to paint: the mountain goat. As Van Wechel explains, it is not just because he like goats, but rather because he enjoys painting their white coats, and “they take me to some of the most amazing places in the West. Places that are high up in the mountains, the vistas,” he says. “For an artist whose love is of the West, they are really the most inspiring locations for me.” Narratives are a key element to Van Wechel’s work, but he hopes viewers still have their own interpretations. “The titles often give the viewer a guide to where my head was when I painted the piece, but they apply their own experience to the painting and create stories for themselves,” he says. “[What I paint] are extensions of my experiences and romanticized versions of my experiences, but to the viewer they may mean something completely different.” All works in the exhibit will be sold via a fixed price draw on August 28 at 4 p.m.