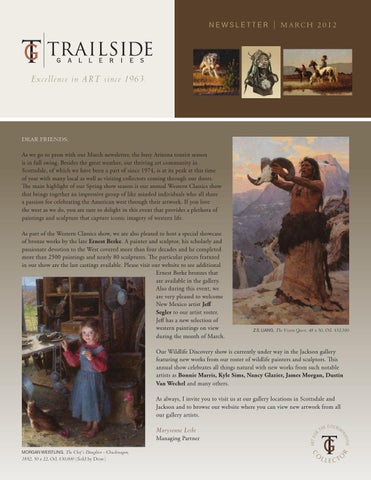 As we go to press with our March newsletter, the busy Arizona tourist season is in full swing. Besides the great weather, our thriving art community in Scottsdale, of which we have been a part of since 1974, is at its peak at this time of year with many local as well as visiting collectors coming through our doors. The main highlight of our Spring show season is our annual Western Classics show that brings together an impressive group of like minded individuals who all share a passion for celebrating the American west through their artwork. If you love the west as we do, you are sure to delight in this event that provides a plethora of paintings and sculpture that capture iconic imagery of western life. As part of the Western Classics show, we are also pleased to host a special showcase of bronze works by the late Ernest Berke. A painter and sculptor, his scholarly and passionate devotion to the West covered more than four decades and he completed more than 2500 paintings and nearly 80 sculptures. The particular pieces featured in our show are the last castings available. Please visit our website to see additional Ernest Berke bronzes that are available in the gallery. Also during this event, we are very pleased to welcome New Mexico artist Jeff Segler to our artist roster. Jeff has a new selection of western paintings on view during the month of March.

Our Wildlife Discovery show is currently under way in the Jackson gallery featuring new works from our roster of wildlife painters and sculptors. This annual show celebrates all things natural with new works from such notable artists as Bonnie Marris, Kyle Sims, Nancy Glazier, James Morgan, Dustin Van Wechel and many others. As always, I invite you to visit us at our gallery locations in Scottsdale and Jackson and to browse our website where you can view new artwork from all our gallery artists. Maryvonne Leshe Managing Partner MORGAN WEISTLING, The Chefâ&amp;#x20AC;&amp;#x2122;s Daughter - Chuckwagon,

ERNEST BERKE SHOWCASE A sculptor and painter of western subjects, Ernest Berke was well known to collectors in both the Southwest and the East Coast. He was born in Harlem, New York City in 1921 to a Romanian clothing designer and a Russian sheet metal worker. His father, who recognized his talent early on, encouraged him to pursue art. After serving in the Air Force during WWII, he worked in advertising as an illustrator for Sears &amp; Roebuck before pursuing art on a full-time basis. A self-taught artist and anthropologist, Berke was a voracious reader. He met on a regular basis at a local New York City bookstore with a group who shared his interest in the West, and occasionally, Berke would also show his works there. His remarkable ability as a researcher coupled with his compassion for Indian culture and his haunting scrutiny of the indignities that were part of frontier America, all contributed to his compelling narratives in both sculpture works and paintings. Berkeâ&amp;#x20AC;&amp;#x2122;s scholarly devotion to the West covered more than four decades and he completed more than 2500 paintings and nearly 80 sculptures, five of which are life-size. His works are in the permanent collection of the Buffalo Bill Historical Center, Crazy Horse Memorial, Amon Carter Museum of the American Indian, Woolaroc Museum, Great Plains Art Museum, and Eiteljorg Museum of American Indian and Western Art.

In addition, his work appears in 17 published books, two of which he published himself. Ernest Berke passed on November 10, 2010.

JEFF SEGLER Trailside Galleries is pleased to now represent Santa Fe based artist Jeff Segler. Born in 1956, Jeff grew up in Alabama, fascinated with western TV shows such as The Lone Ranger and The Rifleman. Jeff graduated with a Fine Art degree from the University of Alabama. His technique is a traditional approach employed by many of the old European Masters, beginning with a good drawing, then a monochromatic under painting to establish patterns and values. According to Jeff, each image needs to be developed around a tight drawing, good composition and design principles, a little atmospheric romance, a little action and drama, engaging color, good strong brushwork and a little bit of storytelling Jeffâ&amp;#x20AC;&amp;#x2122;s influences include N.C. Wyeth, Frank Tenney Johnson, Fredrick Remington and Charlie Russell. He is a member of the prestigious Western Artists of America whose home is currently at The Pearce Museum in Corsicana, Texas.

EAST MEETS WEST April 16 - 28, 2012 â&amp;#x20AC;˘ Scottsdale Reception: April 26th from 6 - 8pm Now in its seventh year, our annual East Meets West show provides a platform to highlight the tremendous talents of several Chinese artists represented here at Trailside. The inaugural show began with just a handful of artists, and has continued to evolve through the years. Among the artists featured in this event are such distinguished names as Mian Situ, Z. S. Liang, Jie Wei Zhou, Huihan Liu, James Jiang and Calvin Liang. While these artists each have a different stylistic approach, the one constant among them is the formal and intensely academic training they each received in their native homeland. As these artists continue to find both critical and financial success in the western hemisphere, they also continue to redefine Chinese art, blending Western influences with their unique and ancient heritage. Please visit out website where you can view additional works featured in our show.

An Auction of Past and Present Masters of the American West

ACCEPTING CONSIGNMENTS FOR THE SEPTEMBER 15, 2012 AUCTION

J O S E P H S U L KOW S K I As the exclusive North American dealer for original works by world renowned sporting artist Joseph Sulkowski, we are pleased to announce that Joseph will have a special feature showcase this August in our Jackson gallery as we debut a new event called “It’s A Dog’s Life.” Considered one of the world’s premier equestrian and canine artists, Joseph refers to his style of painting as “poetic realism” an interpretive form inspired by the natural world. Animals, figures and landscapes of sporting life are the subjects that dominate his canvas, whether inspired by the quail hunting plantations of Georgia or the grouse moors of the Scottish highlands. Please check our website for continued updates on this upcoming show.