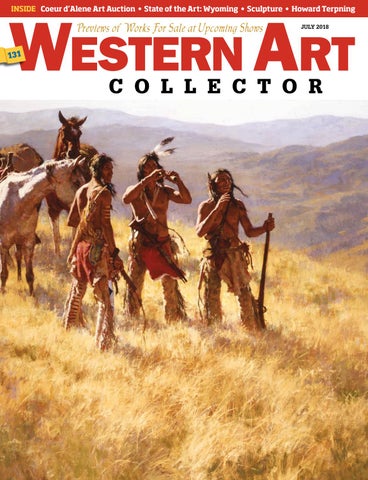 Kissed by the Sun

everal unique qualities permeate S.C. Mummert’s newest paintings, many of which are cowgirls clad in vintage Western duds. First, they are set firmly in a time period in which the Western in TV and film was king, 1925 to 1955, the glory days of the West. Secondly, the works have a sunny California quality to them, which comes from the Hollywood inspiration of the era and the San Diego setting of the artist. A third quality can be summed up in one word: smiles. His figures don’t just look amazing, they also

appear to be enjoying it all as well. That might seem like a minor point of interest, but so much of Western art is life and death, adventure, calamity, silent reflection or even just agonizing work, that a smile has a way of brightening the canvas and humanizing the subjects. “I was raised in an era when America was madly in love with the West, including all things Western like Gene Autry bicycles, TV, movies and Roy Rogers stuff…I could go on and on. I found this great footage of Walt Disney stepping out of Disneyland wearing a cowboy

hat. The West was an exciting part of American culture,” Mummert says. “I want to try and project my feelings, my take, on the West in my work, and display my affection for it.” This affection can certainly be felt in his works showing his female figures, all of them strong, independent and incredibly selfaware. They are beautiful but also modestly dressed and presented as proud ambassadors of the Western lifestyle—wholesome cowboy pinups. The figures are posed in stage-like sets with artificial backgrounds and wallpapers of

iconic Western imagery draped behind them, as if to accentuate the Hollywood aspect of the era. They feel staged, and that’s the point—they could be publicity stills, advertising illustrations or just head shots for young up-and-coming actresses. The clothing is another important element; all of it is vintage and authentic of the era. “For one of the paintings, Kaleidoscope, that’s a 1930s scene and those are 80-yearold jodhpurs. We had to have something sewn up on them, and the seamstress was blown away because no one sews like that anymore. They’re just amazing,” Mummert says, adding that he finds vintage Western wear all around the country. In A Girl’s Gotta Have Options, which shows a beaming female figure holding an 1893 Winchester behind her neck across her shoulders, Mummert found a pair of expensive high-waisted jeans from the late 1930s, and in Picture Perfect, his figure is standing amid iconic bucking bronco images in the background while wearing a pair of vintage beaded gauntlets that were acquired from a friend. All these materials help inform the time and place of his subject matter. “I love finding these things that hit a chord with people because it builds enthusiasm within me, too. I’m always trying to get better. My deal is to wake up and try to make a better painting than I did the day before,” Mummert says. “Norman Rockwell did the same thing: the next painting was always his best. I have to feel like a kid growing as I put marks on the wall and watch to see as I rise past them.” In addition to the female figures, the artist will also be showing more traditional cowboy pieces, including Line Riders, which shows two riders descending a steep hill in a stunning luminous light. The works will be on view in Lipstick, Lead & Leather, opening July 2 at Trailside Galleries in Jackson Hole, Wyoming. The show runs through July 15. Fo r a d i re c t l i n k to t he ex h i b it i n g g a l l e r y g o to w w w. we ste r n a r tc o l l e c to r. c o m